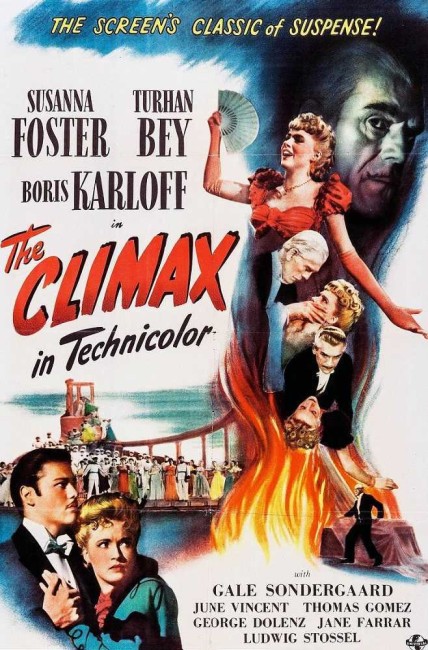 Dr Fredrich Hohner is the physician at The Royal Theater and maintains chambers a few doors away. He is fixated on the lead singer Marcellina and insists she only sing for him rather than the public. When she refuses to give up her career, he kills her. Ten years later, Hohner is in attendance when new understudy Angela Klatt sings an aria from The Magic Voice, which was Marcellina’s signature song. He is overwhelmed by how much her voice resembles Marcellina’s. As Angela becomes the new lead, Hohner insists she come away to his rooms to have her throat tested. There he hypnotises her and tells her that she can no longer sing. When she freezes up in rehearsals, Hohner insists that Angela come away under his care where he proceeds to lock her away from the rest of the world.

The Climax was a film made to exploit the leftover sets and recoup some of the cost of Universal’s lavish colour remake of Phantom of the Opera (1943). This had also starred Susanna Foster as the understudy who becomes the star and Jane Farrar as the conceited diva.

The script comes from Curt Siodmak who had written The Wolf Man (1941) three years earlier. It is another variant on The Phantom of the Opera – the essentials of which ran through several films of this era from the original The Phantom of the Opera (1925) through Svengali (1931) to The Mad Genius (1931), all featuring a malevolent male figures who attempts to control a beautiful innocent after she becomes a singing sensation.

Like Phantom 1943, The Climax is made in colour. This was early into the advent of colour film and the majority of studios had not yet switched over from black-and-white. The Climax has been made to highlight its colour – the sets for the opera house and Boris Karloff’s rooms come lavishly dressed and with the colour emphasised. Even the scenes where Boris Karloff kills Marcellina in flashback have the edges of the lens gauzed out and made to sparkle with diffuse colours.

Both here and in Phantom 1943, it becomes the lavish colour that drives the production more so than the desire to make a horror film. The horror element has largely been bled out. We do get Boris Karloff malevolently lurking around a young impresario a la The Phantom but the drama is centred around her being kidnapped, held, of the attempts to rescue her and her being hypnotised into not being able to perform. It is the standard stuff of a melodrama rather than a horror film. Indeed, the most sinister the film gets is the scene where Boris Karloff uses a rotating fan to hypnotise Susanna Foster.

The central role of the malevolent doctor was cast with Boris Karloff. Karloff was in his heyday, riding on the success he found playing the monster in Frankenstein (1931), which served to make him one of the iconic figures in Hollywood’s Golden Age of Horror. He had appeared in numerous other roles in the 1930s and 40s. Karloff gives a sinister performance. He comes across as a major creeper in some of the scenes like where he ushers Susanna Foster away after her performance on the pretext: “It’s a rule of the theatre to have your throat examined after each performance. Now, if you don’t mind, my office is just around the corner.”

On the other hand, Susanna Foster is colourless as the diva. At least, Turhan Bey as the romantic lead determines to imprint himself on the film – he is all boyish enthusiasm, grinning like a mad leprechaun. The music for the show is all 20th Century modern American, the form of music hall opera that was popular in the era and seems excruciating wailing on the ears today.

There is an undeniable staginess to the sets – all the doors noticeably come with no glass in them, while Karloff improbably has his rooms only a couple of doors down from the opera house. It is also difficult pinpointing exactly which 19th Century city the film is meant to be taking place in – the street names are English ones, while the characters have Germanic-sounding surnames like Holner, Klatt, Munzer and Hinzl alongside Italian names like Roselli and Luise. The town has a boy king and the military wears uniforms out of some 19th Century European country.

George Waggner was mostly known for directing various B-budget Westerns. His most famous film was The Wolf Man (1941). Within the genre, Waggner also made Mystery Plane (1939), Horror Island (1941) and Man-Made Monster (1941), as well as produced the Claude Rains version of Phantom of the Opera (1943). In the latter two decades of his career, Waggner abandoned film work and moved into television.