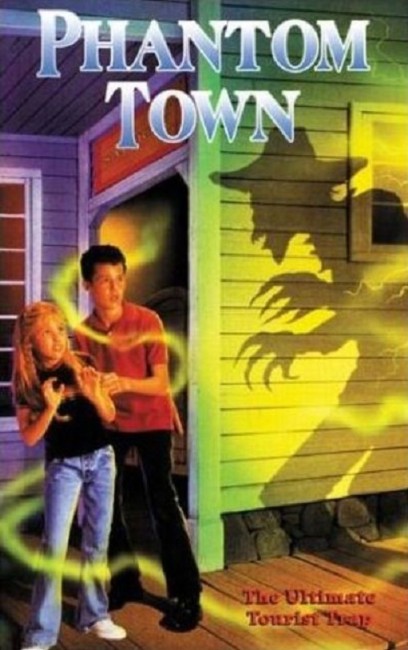 Mike, Arnie and Cindy Reeves are throwing a party while their parents are away. They receive a phone call from their parents on their way home but the phone goes dead as the parents enter the small desert town of Long Hand. The parents fail to return that night and the children decide they must go searching for them. A mysterious Indian warns them away from Long Hand, saying that it is inhabited by the dead and can only be entered in a dream. Inside the town, the children find the inhabitants believing and behaving as though it was 1882. As they try to find their parents, they realize the town is a living thing that wants to trap them there. The town’s denizens try to get them to make a promise that will cause them to become one of the enslaved undead.

Phantom Town is clearly made on a limited budget. Nevertheless, Jeff Burr rides over it with considerable imagination. What one particularly liked about the film was its sense of campfire myth. There is a particularly good introduction with the young Taylor Locke appearing and directly addressing the camera, giving warning of the things that are out there. There is also an excellent scene later with the children encountering an Indian storeowner who tells them about a place where the braves who fail to survive initiation rituals live that has to be entered while they are dreaming. The rest of the film heads in more standard Band-type B-movie directions. Even then Jeff Burr is constantly subverting the imagery of the Western with playful horror effect – like the lizard gunslinger prowling through the town to a showdown and reaching for his six-gun with a green tentacle.

Jeff Burr and screenwriter Benjamin Carr fill Phantom Town with constantly interesting images and ideas – the townspeople caught in a timeloop, the return of the children’s parents eventually revealed as zombies dribbling green goop, the metaphor of the town as a rotting log, the fascia of saloon walls and hotel sofas bleeding goop when they are punctured, the hotel register of souls that suddenly spouts spider legs and scuttles away. Band regular Mark Rappaport’s creature effects are better than usual, although have a clearly cartoony feel that places the film in the category of not to be taken too seriously. The best aspect is the eerie sense of campfire myth hovering in a desert twilight zone. The characterisations of the children are drawn with an often wry sense of humour. The Bands’ Rumanian studios do a halfway reasonable effort of appearing like Texan desert territory.