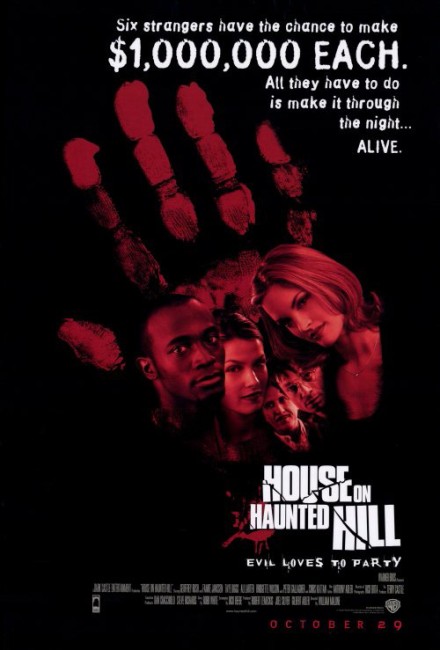 For his hated wife Evelyn’s birthday, millionaire amusement park magnate Steven Price throws a party at the ‘House on Haunted Hill.’ This used to be an asylum where, during the 1930s, the inmates overthrew the building but ended up being burned alive. Steven offers each guest one million dollars if they are still alive by morning. However, someone has substituted Steven’s guest list and instead invited four people who are desperate for the money. As spooky happenings begin to occur and people begin to disappear, nobody is sure any longer whether things are being faked by Price, whether it is all a plot to murder Evelyn, or whether it is a genuine haunting.

Without a doubt, 1999 was a year marked by a major return of supernatural horror. First up was the remake of The Haunting (1999) and this was followed variously by the amazing successes of The Blair Witch Project (1999) and The Sixth Sense (1999), as well as the likes of Stigmata (1999), Stir of Echoes (1999) and Tim Burton’s Sleepy Hollow (1999). The irony to be found here is that this trend was started off by the announcement of the Haunting remake – but where instead The Haunting proved to be the biggest flop of them all, it was sleepers like The Blair Witch Project and The Sixth Sense that ended up capturing everybody’s attention. This remake of House on Haunted Hill (1959) was clearly made in anticipation of The Haunting‘s presupposed success – you can see the thinking that can allow the remake of one haunted house movie to tail-end on the remake of another. Contrarily, House on Haunted Hill emerges as a film that one goes into with lower expectations and one that emerges as a whole lot more enjoyable and unpretentious than The Haunting.

The remake comes from William Malone, a director who has worked down the lower end of the horror spectrum for a number of years with B-budget efforts like Scared to Death (1980) and Titan Find (1984). Malone did contribute the script to the thoroughly awful Universal Soldier: The Return (1999), which came out at the same time as House on Haunted Hill – as well as paid the bills through the years by directing episodes of various genre anthology series like Tales from the Crypt (1989-96) and Perversions of Science (1997). With House on Haunted Hill, William Malone finally obtained his chance at the big time and the opportunity to show what he could do with a sizeable budget and some of the top-drawer effects houses in Hollywood. And Malone acquits himself rather well.

Actually, House on Haunted Hill is a model in its modesty of what all remakes should aspire to be. It is a work that is both respectful of the original, while it also employs the arsenal of top-drawer CGI effects judiciously but not to the point that they overload the show and uses them to strengthen rather than allows them to become the focal point. (Take a lesson The Haunting).

The remake adheres to the general points of the original reasonably faithfully – such as the handguns given out on coffins and the bath of blood. (One did miss the skeleton emerging out of the pool of acid). Moreover, Geoffrey Rush’s character is clearly modelled on Vincent Price in the original in everything from acting to his permed hair, pencil mustache and cravat – the character is even named Price – while his role as a carnival showman seems to be modelled in no small part on William Castle himself. He and Famke Janssen have a great deal of fun tearing up the scenery and sneering taunts at one another.

Perhaps the remake’s biggest departure over the original is that it is no longer a haunted house thriller wherein the supernatural was revealed to be of mundane origin at the end. Here the new script manages to retain several of the twists of the original while also adding a few of its own. This allows William Malone to adeptly play a haunted house carnival ride game dallying between whether what is going on is a real haunting, faked as part of the birthday party or a murder mystery plot.

William Castle was a pedestrian director who failed to invest the original with any atmosphere. In the remake, William Malone directs the shocks adeptly, producing an array of Clive Barker-esque lunatics with ziplock sewn-shut faces, ghosts with swivelling heads, corpses with gutted faces and the climactic emergence of a legion of the dead. There is considerable atmosphere provided throughout by the gloomy subterranean cellars and flickering lighting. The result is a film that comes out far more unpretentiously and far more enjoyably as the cinematic equivalent of a fairground haunted house ride (just like the original was intended) than anything in its clear source of inspiration – the remake of the The Haunting.

William Malone subsequently frittered away the skill shown here. He delivered the screenplay for the flop sf film Supernova (2000) and was original director before being replaced. He then went onto direct the disappointing FeardotCom (2002) about ghosts on the internet and Parasomnia (2008) about a woman with sleeping sickness pursued by a dream-invading serial killer.