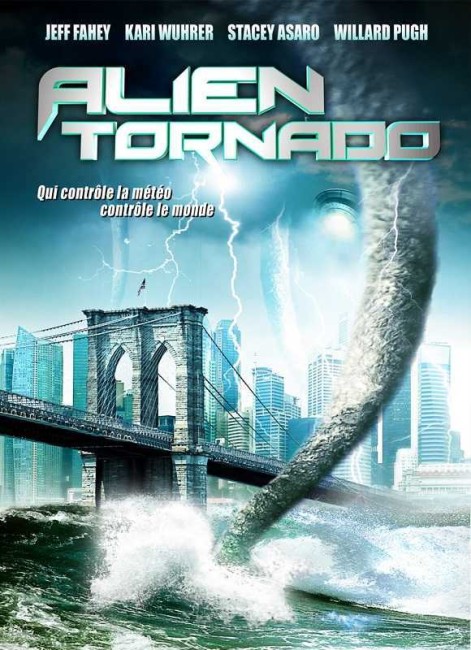 Lando County, Illinois. Just as farmer Judd Walker’s teenager daughter Kelly receives the news that she has been accepted into university, a strange storm that flickers with energy strikes the farm. In the aftermath, Judd is forced to tell Kelly that he has used her college savings to keep the farm afloat. He has difficulty explaining the tornado to local sheriff Norm Mackey. However, the storm has piqued the curiosity of Gail Curtis who runs a popular storm chaser website and she arrives in town to investigate. As she and Judd join forces, they have to deal with Men in Black arrived to deal with the tornados. As Judd and Gail realise that the tornados are alien in origin, they start to grow in number and threaten nearby Chicago.

With the sheer proliferation of product among these low-budget disaster films, most of the regular possibilities for disasters – earthquakes, meteors, Global Warming and so on – were fairly soon exhausted. Thus the films have been turning to more exotic forms of weather and scientific phenomena – black holes, white holes, wormholes, cold fronts from the mesosphere, freak onset Ice Ages and the like. And then there have been attempts to combine menaces – such as Firequake, Stonados and Sharknado (2013). Some of the scenarios these mashups have devised have been getting fairly bizarre – giant plants left over from the Garden of Eden in Seeds of Destruction and the winner of them all – a revived Ouroborous creature in Behemoth.

Alien Tornado slots in somewhere amid these bizarre reaches for novelty, featuring the head-scratching premise of a tornado of alien origin. Quite what its’ alien origin is is something that gets swept under the carpet. We are not sure where the tornado comes from, what its purpose is or even how anybody determined it was alien in nature. In fact, the tornado’s alienness seems denoted solely by it being lit up by cool-looking flashes of energy, it accompanied by a signal and a group of pursuing Men in Black calling it alien. Everything else is the usual formula of the Syfy Channel disaster movie.

In all regards, the film plays out drearily. Director Jeff Burr seems to be making little but the most minimal professional effort. Kari Wuhrer and in particular Jeff Fahey are seasoned pros at this type of film and hold their end up capably. The effects work for the tornado is passable for the most part but falls down when it comes to the cheap-looking scenes of the tornado attacking Chicago. But really this is a film that raises a bizarre premise and then does precisely nothing with it, either to explain it or develop it, anything other than churn through the usual disaster movie formula.