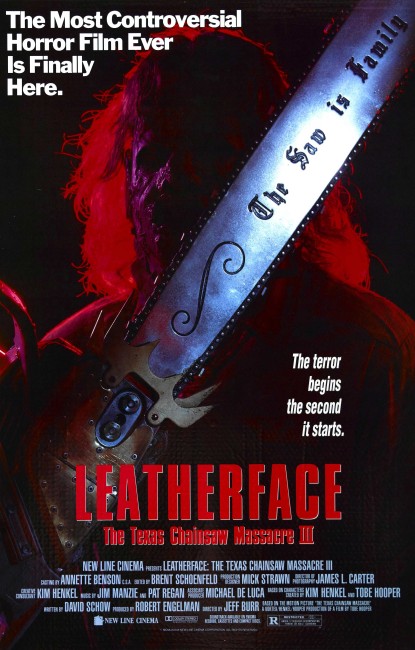 Only one person was ever caught for the notorious Texas Chainsaw Massacre and has been executed. Leatherface was thought to have only been a split personality. Michelle, a university student, and her boyfriend are driving through Texas when they are forced to detour onto a back road. There they are attacked and pursued by a very much alive Leatherface and his twisted family.

While The Texas Chainsaw Massacre 2 is an unjustly ignored classic, Leatherface: Texas Chainsaw Massacre III is deservous of as much contempt as possible. Tobe Hooper’s down-market original, made on tax shelter money by striving ingenues wanting to break into the film industry, has been supplanted by a studio-backed horror film with the horror and gore watered down to the MPAA’s standard the whole way.

Leatherface employs some worthwhile talents, including director Jeff Burr who debuted with the fine anthology film From a Whisper to a Scream (1987) and Splatterpunk author David J. Schow. However, it does the criminal thing for a film that stands in the shadow of The Texas Chain Saw Massacre – it avoids horror. The camera tamely looks away while bodies are carved up on screen – what is on screen is even tamer than most of the graphic bloodshed being shown in other films at the time that Leatherface was made. Admittedly, the first film avoided the showing of any blood too, but there is a marked difference between what it did and what Leatherface: Texas Chainsaw Massacre III does – the original’s avoiding of showing any blood was done with the deliberate intent of implying something even worse occurring, something at which this film fails to do wholly.

The more one compares Leatherface: Texas Chainsaw Massacre III to the original, the lamer it ends up seeming. Kate Hodge’s torture and pursuit by Leatherface is ludicrously mild in comparison to the nightmarish violation and pursuit of Marilyn Burns in the original. The plot weakly imitates the structure of the original – travellers meet hitchhiker, are assaulted, girl tied up in house. Even the house where the family live, despite a far bigger art director’s budget, is orderly and clean and compares woefully to the filthy house decked out in dioramas of animal skeletons in the original.

The occasional scene does work – one scene trying to repair a car tire before Leatherface returns is tensely sustained. Some of the new characters – Viggo Mortensen’s cowboy hitchhiker and particularly Joe Unger’s glintingly fiery-eyed Tink – while pale shadows of the startling menagerie in The Texas Chainsaw Massacre 2, are not too bad additions.