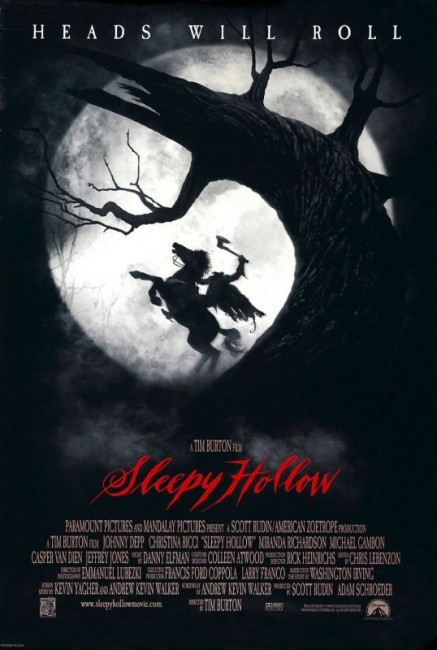 Near the end of the 18th Century. Constable Ichabod Crane earns the disfavour of the courts in New York City for insisting that scientific methods be used to solve crimes rather than guilt by assumption. In reproach, he is assigned to solve a series of beheadings in the remote village of Sleepy Hollow. Crane dismisses the villagers’ notion that the murders are being conducted by the ghost of a headless Hessian horseman and is insistent there must be a mundane explanation. However, an encounter with the Headless Horseman convinces him of its supernatural existence. As he investigates further, Crane realizes someone in the village has the Horseman’s head and is raising the ghost to do their bidding.

In the early 1990s, following the unparalleled box-office and critical success of films like Beetlejuice (1998), Batman (1989), Edward Scissorhands (1990), Batman Returns (1992), The Nightmare Before Christmas (1993) and Ed Wood (1994), Tim Burton rose to become one of the genre’s foremost names and it seemed, with one hit after the other, that he could do no wrong. However, after Mars Attacks! (1996), which was not exactly a financial, nor entirely a critical, flop as many have called it, Tim Burton’s star paled. Burton seemed to drop off of cinematic radars, spending the next few years in development hell with various projects, most notably the Nicolas Cage Superman Reborn vehicle. The films that Tim Burton has made since then, Planet of the Apes (2001), Big Fish (2003), Charlie and the Chocolate Factory (2005), Sweeney Todd: The Demon Barber of Fleet Street (2007), Alice in Wonderland (2010), Dark Shadows (2012), Frankenweenie (2012), Big Eyes (2014) and Dumbo (2019), seem to be lacking many of the oddball delights that made his earlier films.

Sleepy Hollow is an adaptation of Washington Irving’s classic short story The Legend of Sleepy Hollow (1817). The Washington Irving story has been filmed several times before – in 1912, 1922, a tv movie in 1980, as an episode of the Disney animation anthology The Adventures of Ichabod and Mr Toad (1949), the modernized follow-up The Hollow (2004) and the low-budget Headless Horseman (2007), as well as several versions that were made to take advantage of the publicity of this film with the tv movie The Legend of Sleepy Hollow (1999) and the animated The Night of the Headless Horseman (1999). The story even forms a substantial metaphor in Curse of the Cat People (1944). The Legend of Sleepy Hollow is perhaps the closest American literature has come to producing a classic ghost story, although most of the above-listed efforts, excepting the Disney version, have been fairly obscure. There was the subsequent tv series Sleepy Hollow (2013-7), which bizarrely incarnated Icabod Crane in the present-day fighting occult forces.

This version is the most high profile and biggest-budgeted so far, yet it is also the most variant. The script touches base with many of the central features of the story – there is an Ichabod Crane, a Katrina Van Tassel and a Brom Van Brunt, there’s a small town called Sleepy Hollow and a Headless Horseman, and the Horseman’s history is the same as in the story but similarities end about there. Ichabod Crane goes from being a pompous schoolteacher to a visiting constable from New York who specialises in ‘scientific detection’ (a clear attempt to market the film as a forensic psychology thriller a la The Silence of the Lambs (1991) and Se7en (1995) – no real surprises as it also has on board Se7en scripter Andrew Kevin Walker). Now the short story – essentially a twist-in-the-tale piece about a pompous schoolteacher being scared out of his wits by a superstition he ridicules – holds no ambiguity about the supernatural, instead Crane’s superstitions are replaced by an unfolding whodunnit about who is raising the Headless Horseman to do their bidding.

Tim Burton may well be one director who pays more attention to the unison of photography, music and particularly production design in pursuit of his vision than any other director. One of the best things about a Tim Burton film is when Burton forgets about being quirky and subsumes his tendency toward kitsch, bizarre weirdness toward the seamless whole of the mood, as in the Batman films.

There are a couple of moments of Nightmare Before Christmas-esque live-action cartoon jack-in-the-box effects here – heads sprouting pop-up eyeballs – that seem out of place, but for the most part the mood here is exceptionally well sustained. The colour has been bleached out of the frame such that the film almost seems to be taking place in black-and-white. The sets of the town and especially the twisted, gnarled perpetually fog-laden landscape are exceptional. The action sequences – the Horseman attacks and especially the climactic chase aboard a coach and escape from a burning windmill – are exhilarating. Burton said that he wanted to make a Hammer film, something he has confirmed by the casting of Christopher Lee and Michael Gough, the two most famous Hammer actors still alive. Although, if anything, Sleepy Hollow resembles less a Hammer film than it does one of Roger Corman’s Poe films, in particular the mood of The House of Usher (1960).

One of the things that being a Tim Burton film has afforded Sleepy Hollow is an extraordinary cast. Even the small parts are cast with name actors, not to mention the number of prominent actors – Martin Landau, Christopher Walken and Alun Armstrong – that make uncredited appearances. Johnny Depp plays his third leading role in a Tim Burton film, although it is a fey performance and the attempts to play Ichabod Crane for comedy send the film slightly akilter.

Christina Ricci became the queen of independent cinema in the latter half of the 1990s with films like Buffalo 66 (1998), The Opposite of Sex (1998), Pecker (1998), 200 Cigarettes (1999) and Desert Blue (1999), where she came to represent something diametrically opposed to the wholesomely sweet characterization usually played by the likes of Ally Sheedy, Winona Ryder and Drew Barrymore. It was probably inevitable that Tim Burton and Christina Ricci would meet – in their mutual championing of alienated outsiders the two seem kindred spirits. Unfortunately, Christina Ricci seems buried in the film and uncustomarily subdued. She is a player who needs an independent film that allows her unique, acerbic personality to shine, not an A-budget studio vehicle where she is merely one player in an ensemble.

For all that, Sleepy Hollow feels like a good film but not a great Tim Burton film. The supernatural thriller plot seems a little too calculated and never one that holds you pinned with unfolding surprises. While the film is very well directed, there is never any scene that stands out in the way that the Day-O rendition in Beetlejuice, the haircut scene in Edward Scissorhands or almost anything in the Batman films did. There is never any Burton-esque individuality stamped on Sleepy Hollow. It is a beautifully directed film but one less where Tim Burton seems to be making the film he wants to make than a project he has been brought aboard as a hired gun.

What is also peculiar about Sleepy Hollow is that, despite an 18th Century setting, it still manages to throw in contemporary millennial fascinations – the film was released only six weeks before the turn of the millennium. Irritably, nothing more is made of this other than setting the film on the cusp of the close of the 18th Century – it only seems a reference that has been thrown in because of topicality’s sake. However, it is not surprising considering that the script comes from Andrew Kevin Walker whose previous films, Se7en (1995) and 8MM (1999), brimmed with fin du siecle doom and gloom and portentous concern about the imminent moral collapse of society.

The only significance the centennial closing point has is to echo some of the cliché symbolism that has been attached to the millennium. The film ends with a journey through autumnal landscapes – the first touch of bright colour seen in the film – and Johnny Depp and Christina Ricci’s arrival in New York City. “It’s a new century,” Johnny Depp says with open-armed hope as he steps out of the carriage to the vista of a bustling, thriving city. Again it is the equation of the centennial/millennial turning point as the passing away of the old and morally diseased aspects of society and the new era being seen as an age of hope, social progress and physical renewal, not unakin to the coming of a new season.