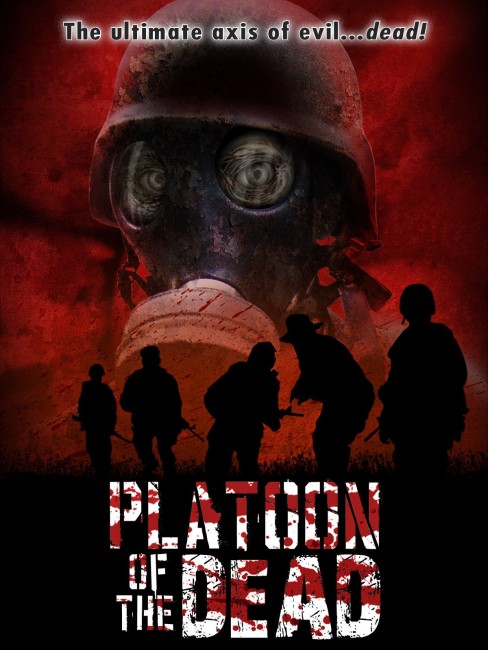 Civilisation has collapsed following a zombie outbreak. Three soldiers, wet-eared Private Dillon, the tough Sergeant Butler and the commanding officer Lieutenant Roberts, come together after the rest of their unit has been wiped during a mission into the woods. They seek refuge at a nearby house, only to discover three girls hiding in the cellar. They agree to a tenuous truce to stay the night whereupon they will shepherd the girls to safety in the morning. However, the lurking zombies outside and tensions and secrets within the house threaten their safety.

We have seen the soldiers vs zombies film before – in particular, one is reminded of The Supernaturals (1986) and of course the stunning example of George Romero’s Day of the Dead (1985). When you take up a military theme in a film, there are always going to be a certain ammosexual percentage of the audience that are going to get their knickers tied in a knot over pointing out the inaccuracies in the way the guns are used, how many bullets a clip should hold, how someone is wearing the wrong insignia for their rank and so on. You only need look to the IMDB user comments section of any military-themed film to see this. I am proud to report that I am not one of these people. That said, Platoon of the Dead shoots itself in the foot by its very cheapness where it quite clearly had no access to weaponry or replicas and so has the soldiers going into action with toy machine guns. It is so cheap that when they shoot there is no blood splatter but instead tatty animated raybeams and disintegration effects. Given that there is nothing anywhere else to suggest that we are in a future setting, this is a cost-cutting measure that almost entirely kills the credibility of the exercise. It should also be noted that a military platoon is supposed to consist of between 15 and 30 soldiers but we get a total of three here.

Platoon of the Dead has a painful amateurism on almost every level. The film feels exactly like it was shot in and around someone’s house. To this extent, almost everything that happens outside of the house has been eliminated – such as the ambush that killed the rest of the unit and any explanations of the zombie holocaust. The upshot of this is leaving you with the feeling that you have started watching a film after missing the first half-hour or so. This is also a film that avoids almost every opportunity for any kind of makeup effects, which are almost requisite for any effort setting out to be a zombie film. Late in the show, we get one intestine devouring and a very unconvincing eyeball plucking but this seems hardly adequate.

There is the occasional part that makes you think Platoon of the Dead could have been more than it is. Some of the performances are okay – Tom Stedham gets right into the bawling tough sergeant role; he may not the greatest actor in the world but he creates a character that you are convinced is completely there whenever he is around. The script has a few wry takes on the zombie film – lines of dialogue that try to rationalise an explanation for the difference between fast and slow-moving zombies, or why they have the need to eat brains.

Platoon of the Dead was one of the films produced by the Tempe Entertainment company of low-budget independent director J.R. Bookwalter, who has made films such as Robot Ninja (1989), Kingdom of the Vampire (1991) and The Sandman (1995), as well as acted as the producer of a great many others. Director John Bowker had previously made The Evilmaker (2000), Abomination: The Evilmaker II (2003), Housebound (2003), The Seekers (2003), and episodes of the anthologies Beyond the Lost World: The Alien Conspiracy III (2003), Werewolf Tales (2003) and Twisted Illusions 2 (2004).