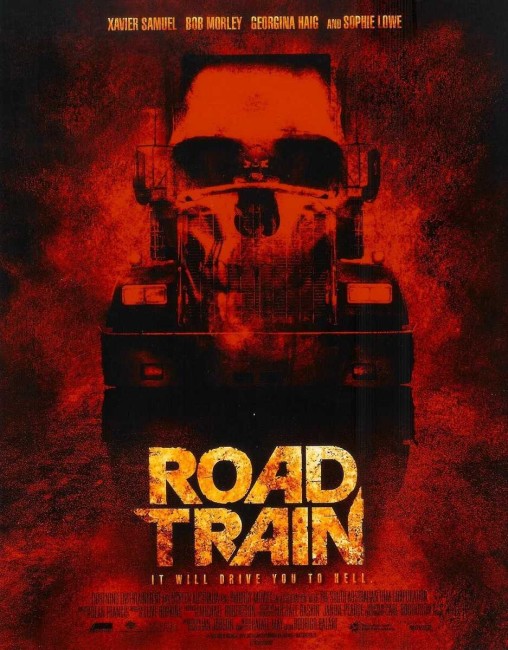 Two couples, Craig and Nina, Marcus and Liz, are camping in the Australian Outback while on a road trip. On the road, they are passed by a road train – a freight convoy made up of a truck towing multiple trailers. However, instead of passing, the road train rams them and causes their vehicle to spin off the road and crash. Marcus is left with a badly wounded arm. The group emerge to find the road train parked not far away but can find no driver. When they enter the cab, a crazed man starts shooting at them so Craig puts the truck into gear and drives off. However, they all fall asleep and Craig ends up driving onto an off road. When they come around, they find the road where they have ended up is too narrow to turn the vehicle around. As the group begins fighting amongst themselves, Nina makes the discovery that the road train has no fuel and that there are horrors inside its containers.

Road Train was the second film from Dean Francis, a former actor on Australia’s hit soap opera Neighbours (1985- ), who made a host of short films before directing the full-length Crazy Richard (2002). Subsequent to Road Train, Francis has directed the non-genre Drown (2015).

A road train is a form of freight transport that involves a truck that tows multiple trailers. The phenomenon began in Australia where it is not uncommon to have trucks towing 2-3, sometimes more, trailers between states. The road train does exist in other countries, although is largely dependent on road rules limiting the number of trailing vehicles. In that this is largely an Australian phenomenon, the film was retitled Road Kill in the US upon the assumption that Americans wouldn’t know what a road train was.

It is immediately apparent minutes into the film that Road Train has taken one huge bite out of Steven Spielberg’s Duel (1971), which had Dennis Weaver being menaced along a California highway road by a massive truck. The scenes with the huge combination truck pursuing the four characters in their SUV on the Outback road could be lifted right out of Duel.

There have been quite a number of copies of Duel over the years with films like Killdozer (1974), Wheels of Terror (1990) and Wrecker (2015), while Australia had produced one of the best of these Duel-influenced films with Richard Franklin’s Roadgames (1981). More than that, Road Train falls into the genre of evil vehicle films that includes the likes of The Car (1977), The Hearse (1980), the Stephen King adaptation Christine (1983) or the vampire car film Ferat Vampire (1982) – see Films About Fantastical Vehicles.

There is never particularly any explanation of what the road train is. One of the more unusual twists is when the group of twentysomethings actually board and begin driving the road train. This leads to further discoveries that its gas tanks are empty and it appears to run on blood, while we get visions later in the show of the interior of its trailers containing machinery that appears to mulch up human bodies to convert into fuel (although these latter scenes are so quickly edited it is never entirely clear what is happening).

Road Train impresses as particularly well made. There is some beautiful photography of the Outback. The characters are reasonably drawn with Sophie Lowe showing much potential. Among the actors, Xavier Samuel did go onto moderate international recognition, appearing in a minor role in the Twilight films and as the monster in Frankenstein (2015).

The idea of the group actually boarding the road train and finding something horrific sounded promising – even the description of them riding the road train not knowing how to get off. The main issue with the film is that after a promising set-up, the story has them drive the road train onto an off-road and then abandons the group in the middle of nowhere off and just peters out. The characters are split up and the film feels lax about following what happens to them, least of all what happens when Bob Morley goes into the back of the truck and returns changed. What we really wanted was more scenes featuring the seemingly supernatural road train. It is the case of a promising film that fails through the lack of having a proper third act.