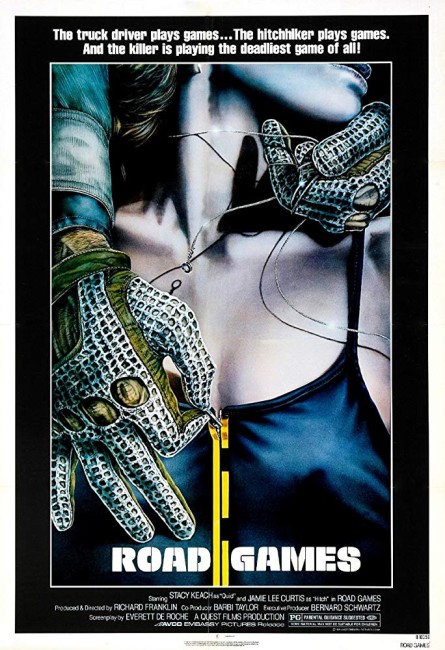 Truck driver Patrick Quid is given the job of transporting a shipment of pig carcasses across the Nullarbor Plain between Melbourne and Perth. Along the way, Patrick thinks that he sees the driver of a panel van burying something on the side of the road. As he continues to see the van driver elsewhere, Patrick believes he may be responsible for the disappearance of several hitchhikers along the highway. However, when he tries to bring this to their attention, this is something that the police suspect Patrick of conducting. He and Hitch, an American hitchhiker that he picks up, try to track the mystery man, only for Hitch to become the latest hitchhiker to be abducted.

Australia’s Richard Franklin was one of the great unsung names of the horror genre. As a student, Franklin became friends with Alfred Hitchcock after persuading him to come to a Q&A session at his film class at the University of Southern California. Franklin made his directorial debut back in Australia with a series of softcore porn films – The True Story of Eskimo Nell (1975) and Fantasm (1976), before having an international hit with Patrick (1978) about a psychic coma patient. After Roadgames, Richard Franklin was invited to Hollywood where he made Psycho II (1983), Cloak and Dagger (1984), Link (1986), FX 2 (1991) and Cyborg Agent/Running Delilah (1994). In the 1990s, Franklin appeared to abandon genre cinema and returned to Australia for mainstream dramas like Hotel Sorrento (1995), Brilliant Lies (1996) and various tv work, although did make one return to genre material with the ghost story Visitors (2003) before his death in 2007.

Roadgames is one of Richard Franklin’s best films and he at his most Hitchcock-influenced. Franklin says that he and screenwriter Everett De Roche envisioned the film as a roadbound version of Hitchcock’s Rear Window (1954). In Rear Window, a wheelchair-bound James Stewart spends the entire running time looking out his window, observing the life of the tenants in the apartments across his courtyard with a telephoto lens, before realising that he may have inadvertently witnessed a murder.

Although the film that Roadgames bears a strong resemblance to, if anything, is Steven Spielberg’s Duel (1971). Roadgames could almost be construed as a Duel with the protagonist and antagonists reversed – where Duel had an everyday motorist pursued by a truck driver, Roadgames has an everyday truck driver being pursued by a sinister motorist. Like Spielberg in Duel, Richard Franklin also keeps the pursuing nemesis a shadowy and rarely seen figure. Moreover, like Duel, Franklin and Everett De Roche do a superb job in capturing the sense of psychological ambiguity and paranoia, of casting doubt around Stacy Keach’s surmises and assumptions, not even letting us be sure that he is correct in who he believes to be the killer.

Richard Franklin does a superb job of maintaining a constant sense of tension and ambiguity. There is a marvellous scene where Stacy Keach sees the mystery driver possibly burying something on the roadside and, as he speculates about what is going on, passenger Marion Edward keeps interpreting what he is saying as something sinister and tries to flee. There is a highly suspenseful sequence with Stacy Keach abusing what he believes to be the killer – seen only as a pair of boots under a bathroom cubicle – while Jamie Lee Curtis investigates a van outside, only for Keach to discover he has gotten the wrong person and return to find Jamie Lee abducted.

There is an amazingly creepy moment where Franklin leaves us unsure whether or not Stacy Keach has gotten two extra carcasses inside his shipment and exactly what they might be. Perhaps influenced by Janet Leigh’s journey through the desert in Hitchcock’s Psycho (1960), Franklin creates an exaggerated, paranoid world around the central character, filled with sinister law enforcement figures – this is not a film that leaves one feeling a high regard for the Australian police force – and in particular the inhabitants of a small nowhere Outback town.

Roadgames also features two of the most eccentric chase sequences ever filmed. The first of these involves Stacy Keach trying to pass a driver towing a boat who is swerving all over the road, only for Keach’s truck to start shredding the wood of the boat as he tries to pass, before the anchor becomes caught under the truck’s axle and the boat is wrenched off and chewed to twigs under the truck, with the mast flying through the air to impale itself in the ground.

The second sequence is the climactic one, which features the peculiar sight of the killer’s car, Stacy Keach’s truck and a pursuing cop car chasing one another though back alleys at 5 mph, with little comic asides like the man who drops his glasses and miraculously manages to avoid having them run over by each passing vehicle. In the finale of the scene, the vehicles become trapped in a tight alley where the police car gets its front bumper trapped under the truck’s fender and the cop is left trying to crawl underneath the truck, while Stacy Keach is unable to open the doors of his truck and tries to get free by driving the truck up over the top of the killer’s car.

Stacy Keach gives a decidedly oddball performance, keeping up a constant monologue to himself and his dog, inventing histories for all the passers-by, accompanying classical music on the radio with his harmonica, quoting poetry and playing various driving games. Richard Franklin has also imported Jamie Lee Curtis as marquee name – she was apparently referred to Franklin by his old USC classmate John Carpenter. (Jamie Lee Curtis’ hiring was apparently upsetting to the Australian actors union who wanted to see a local actress playing the part instead). The only disappointment that comes – something that Richard Franklin even admits on the dvd extras – is how the film fails to use Jamie Lee Curtis, introducing her only to have her abducted and off-screen for most of the film.

With Jamie Lee Curtis present, Avco Embassy played on Curtis’s early 80s Scream Queen persona and tried to sell Roadgames as a slasher film in the US. Avco Embassy also insisted on the addition of a schlocky epilogue, muchly disliked by Richard Franklin, where the truck is being cleaned out and a severed head falls out into the cleaner’s bucket.

Much appreciation for Roadgames is given in the documentary Not Quite Hollywood: The Wild, Untold Story of Ozploitation! (2008) about the Australian exploitation film.