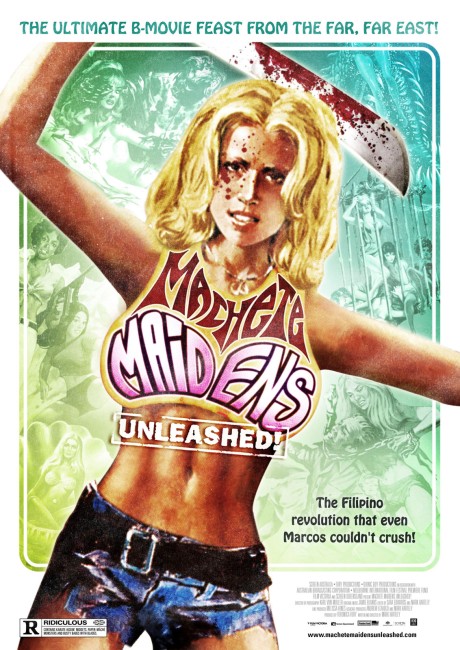 Machete Maidens Unleashed! is a an Australian documentary that was commissioned for the 2010 Melbourne International Film Festival. Director Mark Hartley previously had a reasonable international hit with the documentary Not Quite Hollywood: The Wild, Untold Story of Ozploitation! (2008), which concerned itself with the Australian exploitation genre of the 1970s and 80s (fairly much the same era that Machete Maidens Unleashed! covers). Elsewhere, Mark Hartley has directed shorts for the dvd releases of Australian classics such as The Adventures of Barry McKenzie (1974), The Picnic at Hanging Rock (1975), Don’s Party (1976), Summerfield (1977), The Chain Reaction (1980) and Razorback (1984).

Specifically, Machete Maidens Unleashed! covers the Filipino exploitation industry that emerged in the late 1960s, reached its peak throughout the 1970s and died out in the early 1980s. This began with Eddie Romero and Gerry De Leon’s Terror is a Man (1959) – there had been earlier Filipino-made war films made during the 1960s but these were not successful in international release. Terror is a Man was seen as having potential with drive-in audiences and was snapped up by Hemisphere Pictures and released in the US in 1964. Eddie Romero and Gerry De Leon then went onto repeat the same monster movie formula in Brides of Blood (1968) made specifically for US markets and in particular the hit of Mad Doctor of Blood Island (1969), followed by Romero films such as Beast of Blood (1971), The Beast of the Yellow Night (1971) and The Twilight People (1972) in which they hauled old mad scientist plots over with the addition a good deal of 1960s toplessness and gore, as well as gave John Ashley a career boost.

B-movie legend Roger Corman took notice of the successes these films were having and started to move some of his productions to the Philippines in order to take advantage of the low cost of filming. His first great Filipino success was the Jack Hill directed The Big Doll House (1971), which started off a spate of Women in Prison films (and made Pam Grier into a name). This led to a host of other Filipino-shot Women in Prison films from Roger Corman, including titles such as Women in Cages (1971), The Big Bird Cage (1972), The Hot Box (1972) and The Muthers (1976). When the Women in Prison film died off, Corman turned to Blaxploitation and action films. The film also covers the story of how Joe Dante and Allan Arkush made Hollywood Boulevard (1976) reusing footage from Corman’s Filipino exploitation films and turning it into a parody of the genre – something they both candidly admit came very close to being more like a documentary of how these films were made.

Machete Maidens Unleashed! manages to uncover an amazing range of completely obscure exploitation films of this period. Where else can you find tributes to, discussion of and anecdotes from the making of entirely terrible and forgotten films such as Beyond Atlantis (1973), Bionic Boy (1977), Up from the Depths (1979) and Vampire Hookers (1978)? Not to mention the bizarre Filipino action star Weng Weng, a 2’9″ actor who gained a certain fame playing Agent 00, a pint-sized parody of James Bond. We get extensive coverage of almost entirely forgotten Filipino genre directors such as Eddie Romero, Cirio H. Santiago and to a lesser extent Eddie Nicart. Most of all what seems to shine through, here and in Ozploitation, is Mark Hartley’s love for the sheer bizarreness of this bygone era of 1970s exploitation cinema. There is also brief coverage of the biggest budgeted film ever made in the Philippines, Francis Ford Coppola’s Apocalypse Now (1979), although little is added that was not covered in George Hickenlooper’s Hearts of Darkness: A Filmmaker’s Apocalypse (1991), from which all of the behind-the-scenes footage screened here is taken.

The film brings out an amazing number of interview subjects, including a number of the actresses who whipped their tops off in the Women in Prison films, most of whom are now in their fifties and sixties and quite cheerfully and with complete lack of embarrassment reflect back on what they did. The film is weighed in favour of American stars and production personnel more so than the Filipinos, although a few of these are interviewed, including an 85 year-old Eddie Romero and author/filmmaker/archivist Nick Deocampo, as well as archival interview footage from the late Cirio H. Santiago. There is even brief footage of Imelda Marcos firmly but not entirely convincingly denying the incident in 1981 where the bodies of workers were buried beneath the collapsed building site in order to complete construction in time for its premiere as an international film festival venue.

Perhaps what comes through most of all is in travelling to the Philippines, Roger Corman and the others were entering into a wild west of filmmaking that was far away from the comforts of union-regulated Hollywood. Various of the starlets tell horror stories of the lack of sanitation – of how the women’s dressing room was a cave that also used as a latrine, of bugs crawling out of their salads. Especially alarming are some of the stories of the lack of safety where stunt people were being thrown through real glass windows, jumped off buildings and cliffs without safety gear, and were made to hang from a helicopter 100 feet up. Sid Haig recounts the story of the death of one extra during the collapse of a guard tower on a shoot. The film even makes the claims that real corpses were procured to stand in as dead bodies in Apocalypse Now.

All of which brings one to the inevitable discussion of the politics of the Philippines. Many of the shoots took place during the period after Ferdinand Marcos had established military rule in 1972. John Landis notes the irony of how several of these films had themes about overthrowing the corrupt rulers of prisons or banana republics while being shot in the midst of a real-life fascist dictatorship. The bizarreness of this comes in the blurring of lines between Marcos’s military fighting Islamic insurgents in real-life and then being coerced for filming action scenes – with Brian Trenchard-Smith relating a story of how military helicopters were supplied to the production that came fresh from blowing up rebel bases in the south earlier that day, stopping only to change their ammunition from live rounds to blanks.

Mark Hartley subsequently made Electric Boogaloo: The Wild, Untold Story of Cannon Films (2014), an equally fascinating documentary about Cannon Films. He next ventured into fiction with the remake of Patrick (2013).