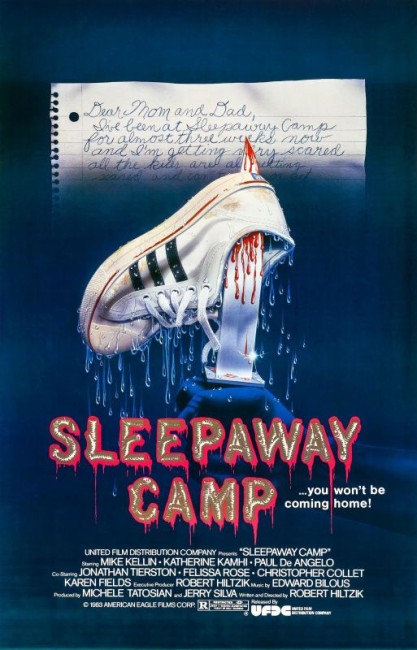 Eight years after a tragic accident where her father was killed at summer camp by an out-of-control water-skiing boat, Angela attends summer camp with her cousin Ricky. Angela is withdrawn and rarely speaks, which makes her the butt of cruel taunts by the other teenagers. Paul develops an interest in her and persuades her to open up and start talking but Angela switches off when he tries to make out with her. Meanwhile, someone is stalking and killing the people who taunt Angela.

Sleepaway Camp was another entry from the classic heyday of the slasher film circa 1980-3. (Slasher Films). It fairly much recycles the same formula of Friday the 13th (1980) – a bunch of teens at a summer camp as someone slaughters their way through the group. It must also be said that Sleepaway Camp does the formula somewhat better than most of the other films that came out amid the slasher cycle.

The teens seem credible in their roles for once. The bullying and horseplay that goes on amongst the group seems highly convincing – it almost feels as though the filmmakers took their camera to a real-life summer camp and simply filmed what went on amongst the kids there. It must be said that the teens look somewhat younger than the usual ones we get in slasher films with some even barely seeming to be touching adolescence.

The film is filled with bizarre characters – the paedophile cook (Owen Hughes); the cook’s African-American replacement (Robert Earl Jones) who keeps saying “yessir” to everything as though he was still a cliche from the slave era; and Mike Kellin as the camp head who covers up deaths, knowingly employs a paedophile, readily agrees to have one of the teenage girls come to his room at night, and at one point starts trying to strangle Jonathan Tierston. That the film doesn’t seem too concerned about much of this – ie. never condemns any of this behaviour – makes it even more bizarre.

The stalking scenes are above average. There is the scene where the cook has the chair pulled from under him as he reaches in to stir a large pot, ending with the boiling water all over him. The first shot we see is a POV of his broiled arms reaching up accompanied by a screaming voice, followed by a shock cut to his burned face. There is the spooky scene where Louis Sallahan comes up into the air bubble underneath an overturned canoe – only to be joined by someone else. We next see his water-logged body in the canoe with a water snake crawling out of his mouth. Elsewhere we get someone locked in a toilet cubicle as a hornet’s nest is thrown through the window, or where Katherine Kamhi takes a shower and is stabbed through the wall.

Many modern psycho films from Psycho (1960) onwards are founded in some sort of Freudian trauma and gender-role confusion. This is something that the slasher film readily took on board. Sleepaway Camp however takes this to an extreme – we even get a man-on-man sex scene at one point, which is fairly radical for the genre. This leads to one of the great endings of any slasher film.

[PLOT SPOILERS] The identity of the killer is no real surprise but what is is where people come across Felissa Rose on the sand, naked and with her back to them, cradling Christopher Collet’s body in her lap. She stands up whereupon his severed head rolls onto the ground, before she turns around and we see her nude, covered in blood, holding a knife and that she has a dick. It is one of the great shock images of the slasher cycle. The film abruptly ends on a freeze frame of the image of her standing there – no confrontation with and despatch of the killer as you might expect – which makes the shock all the more effective.

There have been three sequels:- Sleepaway Camp 2: Unhappy Campers (1988), Sleepaway Camp 3: Teenage Wasteland (1989) and Sleepaway Camp IV: The Survivor (2012). Director/writer Robert Hiltzik also returned with his own independent sequel Return to Sleepaway Camp (1988), the only other film he has directed. Felissa Rose also gained a following on the fan circuit for her role here and has made appearances in a number of other genre films.