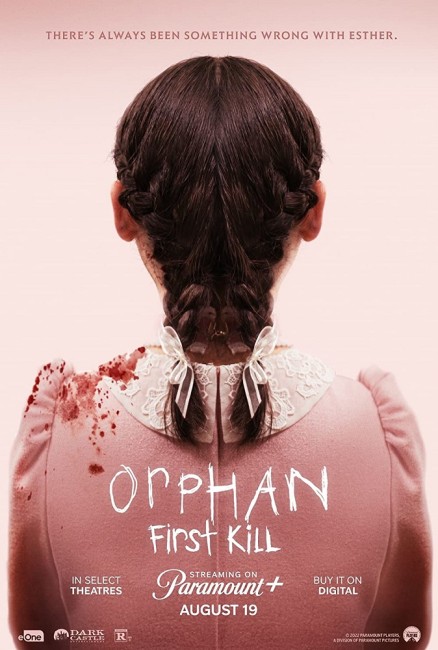 Estonia, 2007. Leena, a 31 year-old woman with a genetic condition that makes her seem like a ten-year-old girl, makes an escape from the asylum where she has been confined by hiding in the car of the visiting psychologist Anna. She then kills Anna and creates a ruse where she poses as being Esther Albright, the missing child of a wealthy family from Connecticut. She is flown to the US and happily ‘reunited’ with husband and wife Allen and Tricia and their teenage son Gunnar. However, Leena’s lack of knowledge of Esther’s life causes problems that threaten to expose her.

Orphan (2009) was a horror film that gained a modest acclaim. It fell into the fad for Evil Children films but came with a big twist where it revealed that Isabelle Fuhrman’s Esther was actually an adult woman with a genetic condition that has left her trapped in the body of a child. The film gained a reasonable acclaim but I was a dissenting voice. Jaume Collet-Serra seemed to direct by clumsy jumpscares and the screenplay had a formulaic predictability. That said, the film clearly found a popularity and this is a sequel.

The sequel has been placed in the hands of William Brent Bell. Ever since his second film, the ridiculous videogame horror Stay Alive (2006), Bell has become a genre regular. Bell went on to the reasonable success of the Found Footage exorcism film The Devil Inside (2012), followed by the werewolf film Wer (2013), The Boy (2016) and its sequel Brahms: The Boy II (2020) about a sinister doll, and the ghost story Separation (2021).

Incredibly enough, Isabelle Fuhrman has returned to play the role of Esther. In the original film, Fuhrman was around twelve years old, near enough to the age that her character appeared to be. By the time of Orphan: First Kill, made thirteen years later, Fuhrman has matured into a young woman – do an image search of her at some of the film’s gala parties and you can clearly see she is no longer a child. This presents Orphan: First Kill with a certain problem in that it now has to make a grown woman resemble a child. This was apparently done with doubles, forced perspective and shots where other the actors were standing on platforms (although apparently no CGI). This ironically makes Fuhrman’s performance more authentic to the character she is playing ie. she is no longer a child playing a woman who has the body of a child but a grown woman playing a woman who has been made up to resemble a child.

I had fairly low expectation of a film by William Brent Bell as all his other works have been unexceptional. Certainly, there are times here when Bell’s direction is heavy-handed – when you see Matthew Finlan using a crossbow, you just know it is going to get used against him; when Hiro Kanagawa plants a knife in a cheeseboard in the foreground of a shot, it feels like a clunkily obvious signpost that that is going to be used later in the scene.

However, Bell quite excels himself here and I would go so far as to say that Orphan: First Kill is his best film to date. This is in no small part due to Isabelle Fuhrman who aces the part. Moreover, this time the main surprise of the first film is out of the bag so the film can make far more upfront about exploring the idea of a woman trapped in a child’s body.

What makes the film more than just another sequel is a smart script. You sit some way in expecting that it is just going to repeat the first film – another story where Esther moves in with a regular family and goes psycho on them. Which it does in large part. However, there comes a great twist in mid-film that throws all of this on its head and entirely subverts the way you expect everything to play out a second time. [PLOT SPOILERS] The latter half becomes one of Esther forced to enter into a devil’s deal for her survival. This is one sequel that really does something original with the premise. Not to mention this gives Julia Stiles, who is usually used to playing serious and good girl roles, the opportunity to get mean and nasty.