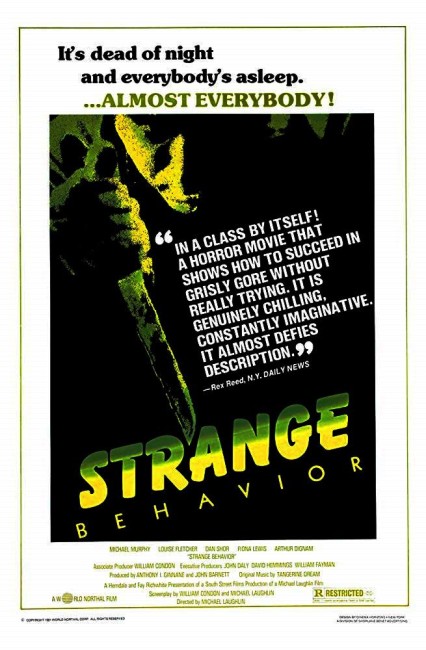 John Brady, sheriff of the small town of Galseburg, investigates a series of incidents where teenagers have gone berserk and started killing people. At the same time, Brady’s son Pete tries to earn money for university tuition by volunteering for a series of experiments being run by Dr Gwen Parkinson at the university psychology department. Brady believes that the source of the amok teenagers is the same psychology lab and that behind them is the late Dr Le Sange, who ran a series of unethical experiments in mind control and was responsible for the death of Brady’s wife. As Brady investigates, it appears that Le Sange may not be dead.

Strange Behavior looks more low budgeted than it is – the entire production shifted to New Zealand when the filmmakers could not find enough authentic-looking American smalltown locations. (It should be added that New Zealand makes for a surprisingly convincing American small town too). Michael Laughlin’s direction seems flat and uninvolved, the photography dull. This is something even further emphasised by the video transfer, (viewed here) which apparently has never heard of pan-and-scan, the transfer camera having been placed flat in the middle of the frame irrespective of whereabouts the characters are located. The plot is standard stuff and does misuse psychological terms such as operant conditioning and behavioural modification.

Despite this, the film comes to life in a number of its shock moments – like the eerie scene where scientist Arthur Dignam hypnotises a chicken and or where the killer at a party removes his mask to reveal the innocent-seeming face of Marc McClure. Fiona Lewis has a ball in her part – there is one wonderfully icchh moment where she jabs a syringe with an eight-inch needle into Dan Shor’s eyeball. There is an atmospheric score from Tangerine Dream.

Director Michael Laughlin next went on to conduct a similar treatment of the alien invader genre with Strange Invaders (1983) and returned to New Zealand to make the Victorian Gothic drama Mesmerized (1986), his last film to date. Screenwriter Bill Condon debuted as director with the Southern Gothic Sister Sister (1987) and went on to make Candyman: Farewell to the Flesh (1995). These days Condon is known for critically acclaimed films like Gods and Monsters (1998), Kinsey (2004), Dreamgirls (2006) and Mr. Holmes (2015), as well as to return to genre material with Breaking Dawn Part 1 (2011) and Breaking Dawn Part Two (2012), as well as the upcoming live-action remake of Beauty and the Beast (2017).