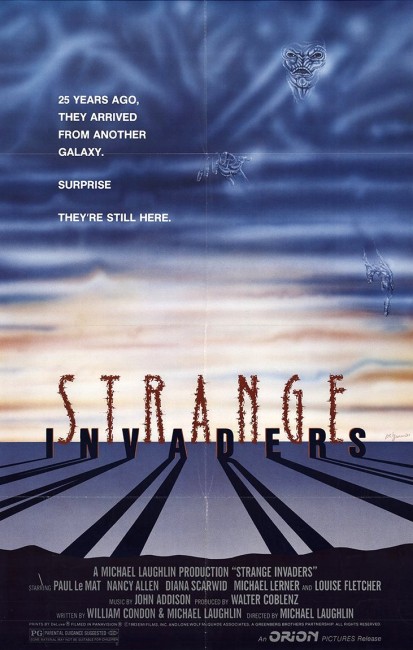 Charles Bigelow, an entomology professor at Columbia University, has his estranged wife Margaret leave their daughter with him while she returns home to Centerville, Illinois for her mother’s funeral. However, Margaret fails to return. Bigelow goes in search of her and finds Centerville to be a town where all the locals dress and behave as though it was still the 1950s. He then sees a bug-eyed monster that shoots a ray blast at him, destroying his car. Returning home, he then finds a picture of the creature on the front cover of a tabloid magazine. He joins forces with tabloid journalist Betty Walker to investigate. Both of them soon find themselves pursued by aliens that disguise themselves inside human-like skins. Gradually, they come to discover that Centerville was set up by an alien scientific research team that came to Earth in 1958 – and that his wife is one of the aliens.

Strange Invaders was a film that failed to do much business when it came out but was celebrated by a number of genre reviewers and seemed on its way to gaining a minor cult status. That never quite turned out to be the case and in the decade since Strange Invaders has languished largely forgotten. It is a modestly effective effort.

Director Michael Laughlin and co-writer Bill Condon had previously made Strange Behavior/Dead Kids (1981), which visited the mad scientist genre with an appealingly light tone. Michael Laughlin’s films are often called genre spoofs, although that is not the case as, while they do draw upon genre tropes and have a sense of humour, they take themselves seriously. Strange Invaders is a good deal softer and more wistful a film than Strange Behaviour.

Michael Laughlin’s amusing central concept is that the invaders were just like the pod people that came in Invasion of the Body Snatchers (1956) and I Married a Monster from Outer Space (1958) during the 1950s but that they became stuck in a time warp and never adjusted to the world around them. Strange Invaders could almost be a conceptual blending of Spielberg’s Close Encounters of the Third Kind (1977) and E.T. – The Extra-Terrestrial (1982) with George Lucas’s American Graffiti (1973).

Michael Laughlin directs with an eye for the weirdly banal – UFOs appearing in the sky creeping over cars parked in Lover’s Lane; Fiona Lewis’s Avon lady spouting green blood. Laughlin’s direction has considerably improved over Strange Behavior, although the gauzy lighting is overdone and the happy wrapup ending is a little too pat. The makeup job on the unveiled aliens is startlingly good. There are occasional genre references and jokes, the most amusing being when a folder of pictures of the aliens at the Center for UFO Studies is shown to contain one of Steven Spielberg.

There is a fun cast, notably Fiona Lewis playing to the hilt as a bizarre Avon lady (she did the same in Michael Laughlin’s Strange Behavior). Laughlin also includes two genuine stars from the original 1950s era – Kenneth Tobey, the hero from The Thing from Another World (1951), the first alien invader film of the 1950s, and June Lockhart, the She-Wolf of London (1945) and the Mom on Lost in Space (1965-8).

It was once announced that Michael Laughlin would make a Strange– trilogy, although a third such titled film has yet to emerge. Laughlin subsequently made the little-seen Gothic horror Mesmerized (1986) and then vanished from sight. Co-writer Bill Condon went onto a genre directorial career of his own with the Southern Gothic psycho-thriller Sister Sister (1987), Candyman: Farewell to the Flesh (1995) and the acclaimed likes of Gods and Monsters (1998), a biopic about genre director James Whale, Kinsey (2004), Dreamgirls (2006) and Mr Holmes (2015), as well as to return to genre material with Breaking Dawn Part 1 (2011) and Breaking Dawn Part Two (2012), as well as the upcoming live-action remake of Beauty and the Beast (2017).