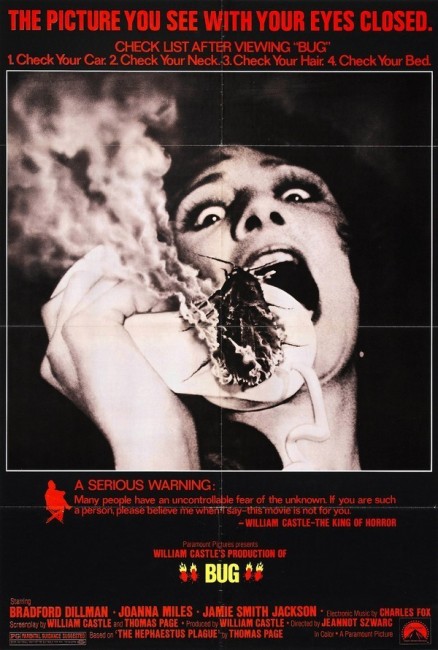 In the aftermath of an earthquake, a previously unknown insect species crawls up out of a fissure in the ground. Entomology professor James Parmiter is fascinated by these new insects and discovers their ability to create fires by rubbing their rear legs together. Parmiter’s wife is killed when one of the insects crawls into her hair. Afterwards, Parmiter becomes obsessed, cross-propagating the bugs with ordinary house roaches. He is then horrified to discover that he has created an insect that has intelligence.

Bug! was also the second cinematic directorial outing of French-born Jeannot Szwarc. Szwarc had previously worked on Rod Serling’s Night Gallery (1970-72) and made the occult tv movie The Devil’s Daughter (1973). Subsequently, Szwarc went onto a career churning out the likes of Jaws 2 (1978), Somewhere in Time (1980) and massive turkeys such as Supergirl (1984) and Santa Claus – The Movie (1985) and a good deal of tv work. Bug! would actually be the best of Jeannot Szwarc’s films.

William Castle and Jeannot Szwarc revisit with considerable verve the type of film that was the staple of the genre during the 1950s. They adapt Thomas Page’s novel The Hephaestus Plague (1973) with far more ingenuity than one might imagine, establishing a fascinatingly credible scientific milieu for the insects. The level of willing disbelief does become slightly questionable when the insects start forming messages in English.

The film is immensely aided by the insect photography – from Ken Middleham who turned out equally impressive work on The Hellstrom Chronicle (1971) and Phase IV (1974) – that maintains a conviction throughout that makes it difficult to work out where it stops and trick photography begins. Thanks to Jeannot Szwarc’s luminously eerie framing, the particular scene with the bugs forming words instead becomes a moment of genuinely eerie horror.

The last half of the film set in the farmhouse attains something intense and unnerving. There are some nasty scenes with the bugs burrowing into Jamie Smith Jackson’s ear and Joanna Miles’ having her hair set on fire (wherein she improbably has a bug crawl up her neck and cause her hair to start smouldering without her even noticing a thing) and a scene with the insects setting a cat on fire that rates highly on the cruelty-to-animals scale. Castle and Page are not that interested in the human characters in the film and some of the dialogue comes out as obvious clunkers – “My girl’s in hospital!” “Isn’t that reason enough to build a pressure tank?” – but an intense, psychotic performance from Bradford Dillman goes well towards redressing this.

Many tend to dismiss Bug! as a schlock film – and some of the occasionally cheesy pyrotechnic effects tend to reinforce this – but there is an intelligence to the film that makes it much better than that. On the minus side, there is an irritating and distracting electronic score.