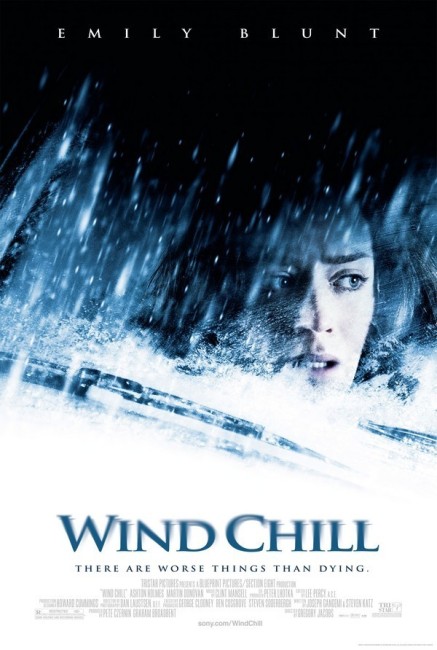 A girl, seeking a ride from university home to Delaware for the Christmas holidays, answers an ad on a campus notice board. She meets the guy and they set out in his beat-up car. She starts to find his actions suspicious – he appears to know more about her than he should and is unfamiliar with the area he claims to be from. He detours down a supposed shortcut but an oncoming vehicle causes them to skid off the road and become buried in a snowdrift. Stuck there, they huddle into the car as evening falls and temperatures to plunge well below zero. As night comes, they see sinister figures out in the snow and are menaced by a ghostly highway patrolman.

Wind Chill is a ghost story from Steven Soderbergh’s Section Eight production company. Section Eight, an independent company created by Steven Soderbergh and George Clooney, has been noted for its willingness to bank on films of unusual and above average intelligence. A sample of Section Eight’s other productions include Keane (2004), Syriana (2005), A Scanner Darkly (2006) and Michael Clayton (2007), as well as Clooney’s superb directorial outings Confessions of a Dangerous Mind (2002) and Good Night, and Good Luck. (2005). Wind Chill was the second outing as director from Gregory Jacobs who had worked as Steven Soderbergh’s assistant director since The Underneath (1995) and as a full producer on almost all of Soderbergh’s films since Full Frontal (2002). Jacobs’ first directorial outing was the non-genre congame film Criminal (2004) and he subsequently went onto make Magic Mike XXL (2015).

In the dvd extras, screenwriter Steven Katz, who had previously written the fascinating Shadow of the Vampire (2000) and went onto write/produce the Soderbergh tv series The Knick (2014-5), describes Wind Chill as the attempt to create “the world’s smallest ghost story” – all set within the location of a car stalled on the roadside. Although the camera does wander out of the car for some of the time, that does remain the sum of the film. Despite the simplicity of this as a concept, the extras also reveal that the shoot was a torturous one in remote parts of British Columbia where the crew had to haul machinery and lights to a small, constricted stretch of snowbound road and then replicate much of the same indoors.

As with most of Section Eight’s other films, Wind Chill stands above its competitors with an uncommon intelligence. Certainly, one welcomes Wind Chill among the dross of other genre material out there as it is a teen horror film, yet also manages to feature convincing and well-drawn characters and dialogue. Among the currently desiccated state of the horror genre, an intelligent teen horror film is as rare as hen’s teeth. British actress Emily Blunt in particular is warm, wry and credibly intelligent.

The sense of mood and atmosphere that Gregory Jacobs creates throughout is excellent. The opening of the film holds a considerable sense of foreboding – the camera lingering on the bag of groceries left forgotten in the car park after the car departs, the gradual suggestion that Ashton Holmes might have creepy intent – he making a comment that Emily Blunt looks good in her glasses even though she does not wear them outside her dorm, he appearing ignorant about the geography of the areas that he claims to come from. The snowbound locations have a haunting beauty.

Once Gregory Jacobs gets the car to the side of the road, Wind Chill sets in with a spooky and unearthly hold. There are some eerie jolts – where Emily Blunt follows a figure in an oil slicker across the bridge, which then turns to her and vomits things forth from its mouth; the sinister hooded figures in black lurking around the periphery of the scene; and the scenes where they are harassed by Martin Donovan’s thuggish highway patrol officer who appears to want shakedown money, only for the scene to suddenly turn into something else altogether.

There is a slight disappointment when it is revealed that behind all this creepily mounted atmosphere we only have the run of the mill ghost story standard of the past replaying itself in the present. One kept expecting that the film would build to something more than that. Gregory Jacobs creates the odd shock that seems to be there more for the desire to throw in a gratuitous visceral jump than rely on the mood and atmosphere alone – like where Martin Donovan keeps smashing through the car window in dreams or the burning Donovan freezes Ned Bellamy to death – but other than that Wind Chill is a reasonable genre showing. Enough to let one know that the current state of the horror film is not in total disrepair.