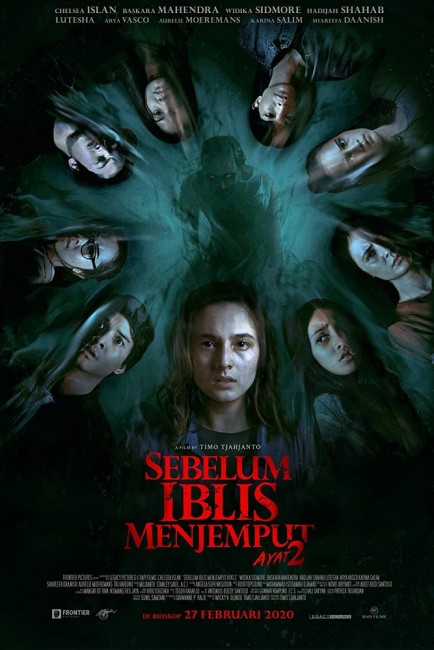 Alfie and her daughter Nara have survived the horror house of her father and return to their home in Jakarta. They are abruptly snatched by masked intruders and taken away to a house in the countryside. There Alfie meets a group of seven, the now grown children who were raised in an orphanage run by the vilely abusive Ayub. Ayub intended to sacrifice them to a demon before they came together and killed him in the cellar of the building. They believe he has enacted a curse on them. To remove the curse, they need someone who has confronted the Devil, Alfie, to enact the ritual. Reluctantly agreeing to do so, Alfie finds that she has instead resurrected Ayub who possesses various of the group, determined to kill all of them.

Timo Tjahjanto is one half of the (unrelated) Indonesian directing duo known as The Mo Brothers, the other ‘brother’ being Kimo Stamboel. After first appearing an episode of the anthology Takut Faces of Fear (2008), The Mo Brothers made an extraordinary feature-length debut with the gore-drenched horror film Macabre (2009). They went on from there to make Killers (2014) about a friendship between two serial killers and the non-genre action film Headshot (2016). Timo Tjahjanto then went solo, contributing episodes to several horror anthologies – the completely wild L is for Libido segment of The ABCs of Death (2012), the Safe Haven episode of V/H/S/2 (2013), an episode of Portals (2019) and The Subject segment of V/H/S/94 (2021) – and the full-length horror film May the Devil Take You (2018) and the action films The Night Comes for Us (2018) and The Big Four (2022).

May the Devil Take You was Timo Tjahjanto’s first full-length solo venture into the horror genre. It was a film where he owed a clear debt of inspiration to 1980s works such as The Evil Dead (1981) and Poltergeist (1982) but I felt it was a never a film that seemed to fully fire on all cylinders. That said, it was clearly a success. This is a sequel, featuring a return performance from Chelsea Islan as Alfie, along with Hadijah Shahab as her daughter.

Interestingly enough, Timo’s fellow Mo Brother Kimo Stamboel went on to make his second solo film The Queen of Black Magic (2018) just before Timo made this. Both films feature almost identical plots where a group of people return as adults to an orphanage where they are attacked, possessed and killed by the vengeful spirit of an abusive care worker that they ended up killing as children.

I felt disappointed with May the Devil Take You but when it comes to the sequel, it feels as though Timo Tjahjanto gets the mix of what he was aiming for right. There comes this point when Timo lets all stops out and goes at the film with everything in his arsenal. There’s the very entertaining initial séance with demonic forces unleashed and levitated saw blades going amok, or scenes with the demon getting a taser in its mouth.

The first time you get hit by the kinetic rawness of what Timo unleashes is when young Hadijah Shahab is being pursued through the house by Lutesha and huddles in a room as Lutesha batters her head against the door outside and then hangs onto the frame and is swinging her entire body to kick at the door and batter her way in while hanging sideways in mid-air. The whole film keeps going at a demented pace – it is essentially Timo Tjahjanto turning the furious full tilt action pacing in The Night Comes for Us towards horror film ends.