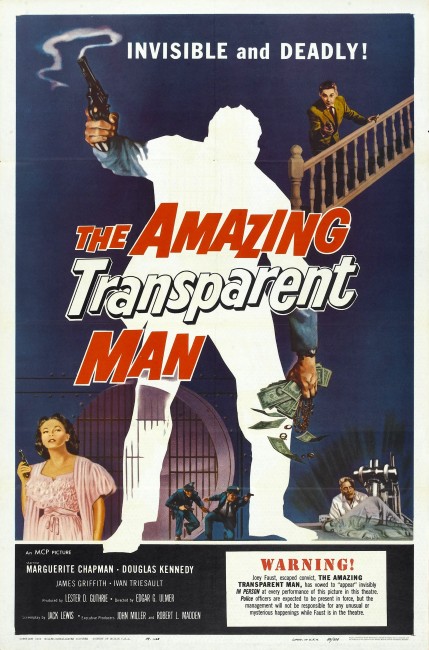 Bank robber Joey Faust is broken out of prison on the orders of the former army major Krenner. Krenner introduces Joey to the refugee German scientist Paul Ulof. Krenner is holding Ulof’s daughter prisoner, forcing him to complete a process that makes people invisible. Joey then finds that Krenner wants him to become the first human subject. The experiment succeeds and Joey is made invisible. As an invisible man, he is then sent to steal the radioactive materials that are needed to further Krenner’s plans to build an invisible army.

The German born Edgar G. Ulmer is a director who gained a small critical following in the 1960s. Ulmer’s reputation lies largely on the basis of two films, the interestingly perverse Boris Karloff-Bela Lugosi team-up The Black Cat (1934) and the cult film noir Detour (1944). Alas the rest of Edgar G. Ulmer’s oeuvre remains relatively undistinguished. Certainly, by the time he came to make most of the material that interests us on this site, Ulmer was working way down the B-budget end of the spectrum where he churned out the likes of The Man from Planet X (1951), Daughter of Dr Jekyll (1957), Beyond the Time Barrier (1960) and The Lost Kingdom/Journey Beneath the Desert (1961).

The Amazing Transparent Man was shot back-to-back with and on the same sets for the same production company as Ulmer’s slightly better time travel film Beyond the Time Barrier. For whatever style Edgar G. Ulmer has been acclaimed for elsewhere (glimmerings of which could be seen in Beyond the Time Barrier), it has evaporated by the time of The Amazing Transparent Man. This is a film that been made with no other ambition than acting as a drive-in support programmer.

Though The Amazing Transparent Man is an invisibility film, it for the most part it plays out like a B crime melodrama of the 1940s. Particularly in regard to the various betrayals and shootouts that the film climaxes on, it is a crime melodrama in all but name. For the first half of the film’s slim 57 minute running time, there is nothing at all to do with invisibility – rather it concerns itself with the goings-on of the captor and imprisoned scientist and their various escape attempts. When the invisibility scenes do arrive, these are distinctly on the cheap side, consisting of no more than a few invisible punches, a canister floating on wires and a vault door opening by itself.

With The Amazing Transparent Man being made at the time period it was (at the end of the 1950s), there is an effort made to graft the invisible man theme onto Atomic Age fears. Somewhat predictably the laboratory goes up in an explosion and A-bomb cloud at the end. Afterwards the scientist and FBI stand around surmising with the typical heavy-handed message-making of the era: “Perhaps we should let the secret [of an invisible army] die with Faust and Major Kenner? It’s a serious problem.” And then turning to the camera, the question is asked: “What would you do?” Despite giving its hero the interesting name of Joey Faust, the film fails to take the opportunity of any of the rich allegorical opportunities this must surely have offered.