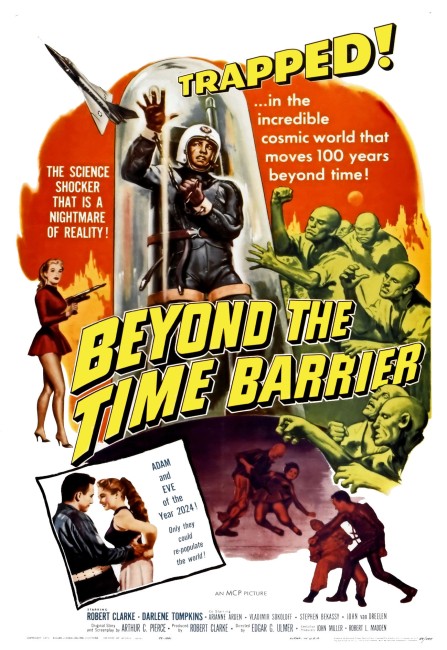 Air Force pilot Major William Ellison sets forth in the experimental X80 fighter plane, aiming to climb up into the stratosphere with the intention of setting a new high-altitude flight record. While up there, the plane momentarily passes through a strange warp and when he comes down, Ellison finds all traces of civilisation in ruins. He is captured and taken to an underground city where he is thought to be a spy. He is saved by the beautiful, mute, telepathic Tyrene, who desires him as her mate. He meets several others who tell him that he has, like they have, passed through a time warp and is now in the year 2024. Radiation from atomic bomb tests has stripped away natural shielding from the atmosphere, exposing the Earth to cosmic radiation, which has turned the remnants of humanity into mute, sterile mutants. Tyrene wants him to stay and repopulate the future but Ellison realises that his only hope is returning back through the time warp to prevent this future from happening.

Beyond the Time Barrier is a B-budget film that was quickly made to exploit the success of George Pal’s much more lavish The Time Machine (1960). In fact though, the theme of the pilot/astronaut being flung into a future where he is forced to defend the remaining genetically pure humans against hordes of mutants amid the ruins of civilisation had been a staple theme of B science-fiction of the previous decade in films such as Captive Woman (1952), World Without End (1956) and the later The Time Travelers (1964).

Beyond the Time Barrier was made by Edgar G. Ulmer, a German emigre who developed a minor cult into the 1960s, on the basis of his perversely charged The Black Cat (1941) and the film noir Detour (1944). Mostly though, Edgar G. Ulmer’s output was undistinguished and rarely deserving of his critical acceptance. He did make a number of B genre films, including the likes of The Man from Planet X (1951), Daughter of Dr Jekyll (1957) and The Lost Kingdom/Journey Beneath the Desert/Siren of Atlantis (1961). Ulmer shot Beyond the Time Barrier at the same time and on the same sets as his cheapie invisible man film The Amazing Transparent Man (1960) – both films were reportedly made within only a total of two weeks.

Beyond the Time Barrier is routine in most regards. The plot is a generic time travel/mutants of the future story with no surprises. It does offer up an almost-plausible piece of pure science-fictional hokum in regard to explaining its time travel – the hero’s experimental plane reached a speed that surpassed the velocity of the galaxy and in a situation analogous to inertia it skipped ahead of time.

Edgar G. Ulmer is clearly working on too much of a rushed schedule to display any visual flair, although some imagination does occasionally show through. The scene in the mutant cells almost touches upon something stylised and Expressionistic – the cell full of stark, angular grilles casting bold shadows and the bald-headed mutants gathering in group formation. It is almost like something out of Metropolis (1927).

The other plus about Beyond the Time Barrier is the sets. Ulmer filmed at the site of the 1959 Texas State Fair in Dallas, making use of several leftover futuristic exhibits. With considerable ingenuity, he has managed to reuse the same pyramidal structures and low ceilings, endlessly rearranging them to achieve modestly effective results on a painfully low budget. Elsewhere though, the effects look cheap – the single matte painting of the city of the future looks static and unconvincing.