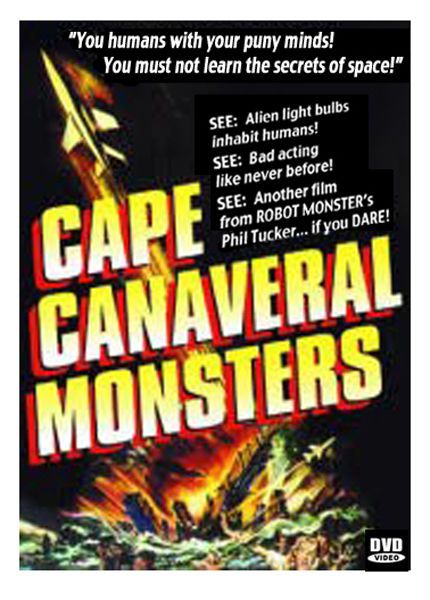 Hauron and Nadja, two aliens that exist as disembodied energy, arrive on Earth and inhabit the bodies of a man and a woman that are killed in a car crash. They then set out to sabotage the rocket launches at Cape Canaveral. Hauron has his arm ripped off by a guard dog at the base and seeks another human body from which to appropriate a replacement. Meanwhile, Tom Wright, a bright young assistant on the space program, has developed an interest in Sally, the niece of the project head Dr Von Hoften who does not approve of them flirting during work hours. In sneaking away to find some time together, they discover the aliens’ base in a cave in the hillside, only to be made prisoners.

Phil Tucker (1927-85) is best known for the legendary Z movie classic Robot Monster (1953), which is considered one of the worst films of all time. Tucker did not make much else outside of that apart from Dance Hall Racket (1953) and a spate of little seen burlesque/stripper films in the late 1950s. The Cape Canaveral Monsters was Tucker’s only other venture into genre material and the last film he would ever direct.

The Cape Canaveral Monsters has a bad movie reputation – more one assumes because of its association with the director of Robot Monster than anything else – although is not as famous. It is less bad a film than Robot Monster – that is to say lacks as much in the way of extreme penny-pinching or hilariously purple dialogue – and resultingly is not quite as interesting. Not that that should lead one to believe that it is a particularly good film either. It has been skewered on Mystery Science Theater 3000 (1988-99, 2017-8).

As evidenced by its title, The Cape Canaveral Monsters was made at the dawn of the Space Age. The Russians had just launched the first satellite Sputnik three years earlier and both the USSR and USA were in heated competition to put the first man into space (which the Russians achieved with Yuri Gagarin the year after this film came out). Cape Canaveral – or at least the Air Force Station based there as opposed to the peninsula itself – because synonymous with the US Space Mission following the launch of the first ICBM there in 1959. All of the Mercury, Gemini and Apollo missions would be launched from there in the decade ahead. In that aliens were often a thinly disguised stand-in for the Communist menace during 1950s sf cinema, it is no particular surprise that they are directly seen to be sabotaging the US Space Mission in the film.

The Cape Canaveral Monsters follows the trend that began towards the end of the 1950s of alien invader films that involve aliens possessing the dead – see other efforts such as Invisible Invaders (1959), Plan 9 from Outer Space (1959) and The Earth Dies Screaming (1964). This is even cheaper than most in that the alien invaders are limited to two and their natural form is represented by tatty optically superimposed blobs of light. The film gets a certain amusement out of the scenes with the male alien (Jason Johnson) having his arm torn off, which result in some eminently quotable lines such as “Hurry, Hauron. Your arm. Take it and I’ll sew it back on at the laboratory,” or “We can make do until after the launching to find more earthlings. I can do with one arm until then.”

Expectedly, the film is cheaply made. Stock footage from the US space program is interspersed with scenes of the teens hanging out at Lover’s Lane (part of the appeal to a teen focus made by many genre films back in this era). Most of the action takes place in a cave with the two scar-faced aliens trading bitchy taunts and the two teen lovers imprisoned against the wall (where Scott Peters finally makes an escape using the radium traces of his glow-in-the-dark watch). There is a certain sleaze appeal that Tucker seems to be aiming for – closing in in closeup as the aliens turn Linda Cornell over and go to remove her bra, while later the male alien seems to fixate on her with intent once they are alone.