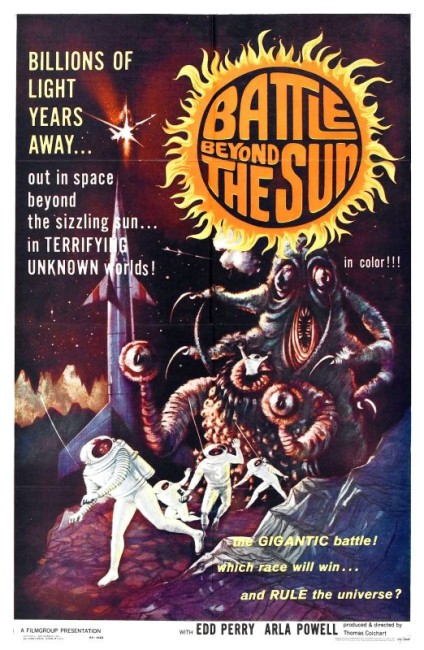 It is the year 1997. In the aftermath of atomic wars, the Earth has split into two superpowers that control each of the two hemispheres, The North Hemis and the South Hemis. The South Hemis launch a rocket to rendezvous with their space station, from which they are planning to travel on towards Mars as part of Project Red Planet. The journey is interrupted by The Typhoon, a North Hemis rocket that is experiencing trouble, and the South Hemis give aid to its crew. When the two North Hemis astronauts learn about the planned Mars mission, they decide they must be there first and launch their rocket on an impromptu mission. The South Hemis team continue on to Mars and have to give aid when The Typhoon runs into trouble. Joining forces, the astronauts travel on towards Mars, but further troubles cause them to crash on an asteroid orbiting Mars.

Battle Beyond the Sun was the first among a handful of films released by legendary exploitation producer Roger Corman during the 1960s. Corman managed to obtain the rights to two Russian science-fiction films. He then recut this footage and used young talent that was looking for a break into the industry – directors on these films included Francis Ford Coppola here (hiding under the pseudonym Thomas Colchart), Peter Bogdanovich, Curtis Harrington and Stephanie Rothman. Corman had them shoot a limited amount of new footage and released the results as completely new films. In many cases, the same Russian footage was used in several different films. The other films made out of this Russian material included Voyage to the Prehistoric Planet (1965), Queen of Blood (1966) and Voyage to the Planet of Prehistoric Women (1968).

In the case of Battle Beyond the Sun, Roger Corman obtained the rights to a Soviet science-fiction film Niebo Zowiet (1959), which translates as The Heavens Call. Corman handed editorship of the film over to a very young Francis Ford Coppola. In the next decade, Francis Ford Coppola would of course go onto fame as the director of classics such as The Godfather (1972) and Apocalypse Now (1979). However, at this point Coppola was kicking around working as a general dogsbody for Corman, before he was granted the right to direct a fully-fledged film of his own with the nudie Western Tonight for Sure (1962).

There is a certain degree of myth that surrounds Battle Beyond the Sun. There are no known copies of The Heavens Call circulating in English-language translation and information on the original Soviet version is scarce, making comparison between the two versions difficult. The Aurum Film Encyclopaedia: Science Fiction (1984) claims that Roger Corman cut the film so that what originally appeared as a race between East-West superpowers to get to Mars that ended with the East winning in the original was reversed in Corman’s cut to have the West winning. However, such a focus does not appear in the finished film – there is a fight to get there between the Northern and Southern Hemispheres, although it is not clear which hemisphere is representing which superpower and moreover the film ends with a cooperative effort as opposed to any clear winner. (One wonders if the Aurum reviewers had actually watched the film or were just recycling material from other reviews).

Commentary on the excellent And You Call Yourself a Scientist? website gives a more credible explanation in saying that Niebo Zowiet had the South Hemis standing in for the Americans, who were shown to be impetuous and hot-headed in their desire to win the Space Race, and the calmer, more level-headed North Hemis, standing in for the Russians, being the ones who show the need for mutual cooperation.

Francis Ford Coppola is said to have directed new material for the film, although it is not exactly clear what is his and what belongs to the original. Certainly, there are no American actors cast for new material as there were in the other Corman Russian science-fiction films – all the acting names on the credits are in fact Anglicised versions of the names of the original Russian actors. There are one or two model rocket shots that fail to match the quality of the rest of the material, and almost certainly a couple of shoddy shots of an eyeball monster the appears on the asteroid, which one could assume have been shot on the cheap by Coppola. Mostly, one could say that Coppola’s role has been limited to that of editor, of merely rearranging and redubbing the original Russian footage.

One wishes that there were the opportunity to view the original Russian film, as what there is on show here looks magnificent. In an era when most American science-fiction films were cheaply produced and rockets and space stations frequently had the wires showing, the Soviets went to work with what is clearly a major budget (all Soviet films during this era were state-financed). There are some incredibly lavish mission control sets and space station interiors, while the effects are some of the best of this era anywhere in the world.

There are dazzling shots with rockets being launched and docking with the space station, astronauts floating in zero g, even shots circling around the space station where we can see both the complete station within shot and tiny space-suited figures walking around on its exterior. Although the most breathtaking effects shot is one where we see the image of an illuminated Mars rising up beyond the astronauts over the horizon of the asteroid. Moreover, the Soviets have taken the time to create a scientifically plausible space journey and pay painstaking attention to the realism of the exercise, unlike almost any American-made science-fiction film of the same era.

On the minus side, most of the actors are stolid and the film grants them little in the way of individuality or characterisation – although it is hard to tell if this is a function of the original Russian film (Russian cinema tending to be monosyllabic when it comes to characterisation) or of Roger Corman and Francis Ford Coppola having cut all the human drama to focus on the effects. The ending is abrupt with the astronauts not even reaching Mars, which gives the impression that some of the film has been cut. (Indeed, the end belies the Americanised title – a race to get to Mars hardly qualifies as a ‘battle beyond the sun’, and what goes on seems less of a battle than it does a race and eventual plea for cooperation in the Space Race).

Certainly, there is an interesting subtext of Cold War Space Race tension that underlies the film. Again, it is hard to tell what existed in the original film and what has been added by Coppola and Corman. In this version at least, the film sees a future where the world is divided into two superpowers – the Northern and Southern Hemispheres – and there exists a state of tension, distrust and rivalry between the two as to who gets to Mars first. This is certainly an accurate x-ray of the tensions that existed between the US and USSR and the race to be the first into space and to the Moon during the late 1950s/early 1960s. It is interesting to note that unlike American portraits of Cold War tension, the Soviets do not fear an imminent invasion of their enemies, merely a race for prestige and national importance.

The opening narration offers up the peculiar claim: “The motion picture you are about to see is a fantasy but maybe one day in the not-too-distant future, audiences may be able to look back at the way we view pictures of covered wagons crossing the plains.” It is a grandiose claim of self-importance on the film’s part – indeed, looking back at Battle Beyond the Sun from the ‘not-too-distant future’ of 40 years on, it seems less like an historical portrait of people bravely forging a new frontier than one that taps into the peculiar mindset of its age.