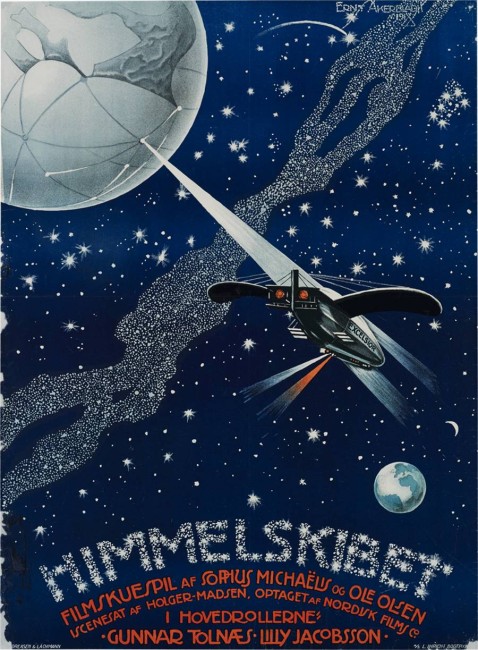 aka A Trip to Mars
(Himmelskibet)

The naval hero Captain Avanti Planetaros is recruited to head an expedition to Mars. It takes two years to build the plane. It is then launched with an international crew aboard. After a long journey, the astronauts land on Mars and are welcomed by its people who live by a code of peace and harmony. When Avanti brings out his gun and shoots a bird, The Martians are shocked as there have been no weapons or eating of meat on the planet for many aeons. The men are placed on trial and shown how to earn forgiveness. During the course of the trial, Avanti finds himself falling for Marya, the daughter of the Martian leader.

Himmelskibet, which translates as either Heaven Ship or Sky Ship, can lay claim to being the first serious film about space travel. The film was referred to as Heaven Ship in reference guides for many years, although in the internet era has more commonly become known as A Trip to Mars. For many years, Himmelskibet was unavailable and believed lost until the Danish Film Institute conducted a restoration in 2006.

Up until this point, space travel had been the province of Georges Melies whimsies such as A Trip to the Moon (1902) and An Impossible Voyage (1904) and Melies imitators like The ? Motorist (1906) and Segundo de Chomon’s A Voyage to Jupiter (1907) and Excursion to the Moon (1908). These took place in an unserious vein that was more fantasy than science-fiction – The Moon and Sun had faces, where escape velocity was achieved by vehicles travelling so fast they took off into orbit and then did a circuit around the rings of Saturn and so on.

Heaven Ship was the first to take spaceflight out of the cartoonish and into serious speculation. Certainly, the space journey here, which takes place aboard a ship that looks like a cross between a biplane and a dirigible, is no more serious in practicality than any of these. (The film was imagining a space journey before the era of rocketry and was unscientifically conceiving of it as being an extension of the new technological marvel of the airplane).

Nevertheless, Heaven Ship was a serious effort that paved the way towards other works of space exploration of the silent era such as the Soviet Aelita (1924) and Fritz Lang’s Woman in the Moon (1929), which was all that was said on the subject until George Pal’s Destination Moon (1950) firmly set the topic of spaceflight down with rigorous scientific regard (not to mention added sound and colour to the equation).

Having abandoned the whimsies of Melies, these early spaceflight films then turned towards Utopianism. Aelita saw Mars as in need of being reformed by the Communist Revolution; the H.G. Wells-written Things to Come (1936), which climaxed with a spaceflight attempt, was a Utopian vision that saw the elimination of a world rent by the horrors of war and the establishment of a new society based on scientific principles. Fritz Lang’s Woman in the Moon wasn’t Utopian but it was an outthrust of his Utopian vision in Metropolis (1927), which imagined an industrialist future with the need for peaceful mediation between masters and proletariat.

Heaven Ship was released before the end of World War I and as a result its idea of Utopia is an immediate reaction to the horrendous conflict that was ravaging much of Europe at the time. Thus the society found on Mars is seen as one that venerates peace above all else – it almost looks like a hippie vision of Utopia fifty years before the real thing where the men wear robes and the girls come in white dresses with garlands of flowers in their hair. The Martians never do much more as a society than uphold the virtue of peace, non-violence and vegetarianism – there is one hilarious scene where Gunnar Tolnaes whips out his pistol to demonstrate the nature of meat-eating and shoots a bird flying overhead whereupon a large stuffed buzzard falls at his feet. They are placed on trial and convicted in a court procedure that merely requires them to seek redemption and ponder upon what they have done.

During Tolnaes’ subsequent romance with Lilly Jacobson, we get cuts made between the idyllic Martian society and a montage of scenes back on Earth – raucous drunken partying in dancehalls, people in gambling dens – to suggest that life on Earth is corrupt by contrast. Finally, Gunnar Tolnaes and Lilly Jacobson are married on Mars, the film follows their return journey to Earth and reaches an end that looks forward to their union having produced the seeds of peace and hope. While upbeat, if you contrast this to the horrors and savagery that was occurring on the battlefields of Europe around the same time, it is a hopelessly idealistic end that seems no better than someone idly wishing “why can’t we just all get along better?”

The problem with Heaven Ship is the same one that all Utopian stories face – in a world that is perfect, nothing much ever happens to create the drama that a story needs to work. Once on Mars, as soon as the trial is over (fairly quickly), little occurs beyond the romance. Director Holger-Madsen does demonstrate some occasional lyrical visual poetry – Gunnar Tolnaes going to sleep by the Tree of Love outlined against a lake while his love Lilly Jacobson goes to sleep in a forest of giant glowing flower petals to await his dream of her. It is images like these – the sort that someone like Fritz Lang would have delighted in – that Heaven Ship needed more of.