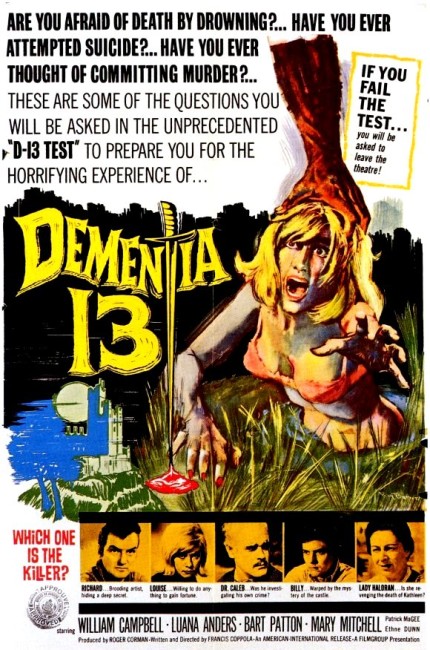 aka The Haunted and the Hunted

Members of the Haloran family gather at the ancestral Irish castle to attend the annual commemoration of the death of Kathleen, a daughter of the family who drowned in the lake six years earlier. While they are there, John Haloran dies of a heart-attack. His wife Louise dumps his body in the lake and then pretends that John has returned to New York, needing to maintain the pretence that he is alive in order to claim the family inheritance. She then begins an elaborate ruse to convince Lady Haloran that Kathleen is still alive and is trying to communicate with her. However, her deception is discovered and Louise is decapitated by an axe-wielding killer who then proceeds to slaughter their way through the rest of the family.

These days Francis Ford Coppola is one of the finest directors in the world with spectacularly imaginative, epic sized and occasionally topplingly indulgent works like The Godfather (1972) and sequels, Apocalypse Now (1979), The Cotton Club (1984) and Bram Stoker’s Dracula (1992) to his name.

This B-movie psycho-thriller from Roger Corman and American International Pictures has the distinction of being the second film from Coppola – Coppola had previously directed the nudie Tonight for Sure (1961) and pseudonymously reedited and shot extra footage from a Russian science-fiction film and released it as Battle Beyond the Sun (1963). (Perhaps one should say that Dementia 13 is the first film that Francis Ford Coppola is willing to acknowledge as his). At the time, Coppola was working as assistant director for Corman on films like Premature Burial (1962) and The Young Racers (1962). He persuaded Corman to put up $22,000 and then shot Dementia 13 in two weeks on leftover sets and with several of the stars (Luana Anders, Patrick Magee and William Campbell) from The Young Racers.

There is a tendency among other critics to analyse Dementia 13 and see it overly much in terms of themes and style that Francis Ford Coppola would develop in later films. In truth, Dementia 13 is simply an enjoyable B-movie, one of the numerous psycho-thrillers that were being made around the time by Hammer and William Castle. Coppola is clearly copying the success of other psycho-thrillers such as Les Diaboliques (1955), Psycho (1960) and What Ever Happened to Baby Jane? (1962). Considered in itself, Dementia 13 is only a minor entry in this genre.

Certainly, Coppola delivers with modest effectiveness. The opening scene holds the memorable image of Peter Reed’s body and a still-squawking radio sinking down to the bottom of a lake. The axe attacks are quite strong for the time the film was made – in one scene, the victim’s decapitated head goes bouncing down into the water, and then there is Luana Anders’ dispatch, hacked to death in a scene ingeniously shot up from under the surface of the water.

The plot is oddly haphazard, giving the impression of having been hastily slung together (not too surprising the way that Roger Corman made movies). It starts out as a Les Diaboliques-styled psycho-thriller involving a typically elaborate congame to obtain an inheritance but then abruptly kills off its up-to-then central character a la Psycho and takes off on a completely different, more traditional tack. However, the script fails to entirely satisfy there, with the denouement not making much sense either. Nor for that matter does the title Dementia 13 have anything to do with the film. Nevertheless, Francis Ford Coppola’s flashes of style do cause it to stand out above the routine.