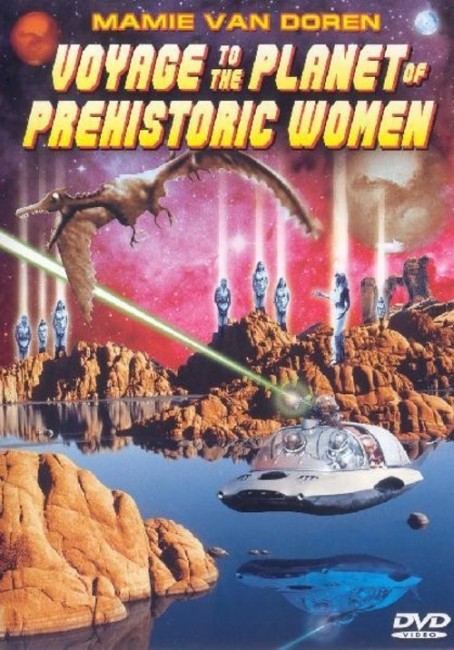 aka The Gill Women of Venus

In the year 1998, an expedition is sent to explore Venus. However, after the ship lands, contact is lost with the two astronauts. They, along with the ship’s robot, emerge to explore Venus’s primordial and tempestuous surface that is teeming with dinosaurs and predatory plant life. A second expedition of three astronauts is sent to aid them. As the astronauts from the second expedition explore the surface in an air car, they discover an underwater city and then shoot down a winged reptile that attacks them. Unknown to them, the reptile is worshipped as the god Terra by the native Venusian mermaid women. Discovering its body, Moana, the leader of the mermaid women, calls upon the elements to punish the Earthmen for their sacrilege in killing their god. Soon the astronauts find themselves fighting off a rainstorm and torrents of volcanic lava.

Voyage to the Planet of Prehistoric Women was the fourth in a series of films that legendary B budget producer-director Roger Corman managed to make by buying up two Soviet-made science-fiction films and re-editing them for American audiences. Corman started with The Heavens Call (1959), which was re-edited by a novice Francis Ford Coppola to become Battle Beyond the Sun (1963). Corman then obtained the rights to the Russian Storm Planet (1962) and managed to re-edit this as Voyage to the Prehistoric Planet (1965), as well as reuse various effects scenes in Curtis Harrington’s otherwise original Queen of Blood (1966). Finally, Corman managed to milk blood from the same stone by rehashing both Storm Planet and The Heavens Call as Voyage to the Planet of Prehistoric Women here. (Indeed, Planet of Prehistoric Women even manages to rehash the new footage that Coppola shot for Battle Beyond the Sun, lifting the narrated prologue directly from that film). It should be noted that The Heavens Call was in black-and-white and Storm Planet in colour so in order to make the footage match, Voyage to the Planet of Prehistoric Women has simply been printed in black-and-white. The one reason that Roger Corman so relentlessly reused the Soviet science-fiction films during this period was because the special effects footage is of a quality that stands head and shoulders above that in most other American science-fiction films of this same era. (There was a further film in the Prehistoric Planet trilogy with Women of the Prehistoric Planet (1966), although that did not feature any Russian film footage).

Roger Corman was also noted for taking a number of young novice directors under his wing and granting them their first opportunities to get a foothold in the industry at the same time as taking advantage of their willingness to work for peanuts just to get a break. These Prehistoric Planet films alone gave breaks to names like Francis Ford Coppola, Curtis Harrington, Stephanie Rothmann and Star Wars (1977) producer Gary Kurtz. With Voyage to the Planet of Prehistoric Women, Roger Corman gave a break to a young Peter Bogdanovich who directs the film from behind the pseudonym Derek Thomas, as well as narrates under his own name. A year later, Corman donated Peter Bogdanovich three days of an unused contract he had for Boris Karloff and Bogdanovich went away to make the excellent psycho-thriller Targets (1968) and secured a career for himself. Subsequently, Peter Bogdanovich would go onto make acclaimed films like The Last Picture Show (1971), What’s Up Doc? (1972), Paper Moon (1973), Nickelodeon (1976) and Mask (1985).

Three-quarters plus of Voyage to the Planet of Prehistoric Women is comprised of footage taken from the two Russian science-fiction films. The launch, the docking with the space station and journey to the planet all comes from The Heavens Call, while the scenes exploring the surface of Venus are from Storm Planet. Peter Bogdanovich has shot about 15-20 minutes of original scenes with the mermaid women. There is no dialogue in any of these scenes – they, and the whole of the film, are all narrated by Bogdanovich.

Voyage to the Planet of Prehistoric Women falls into the cliches of various 1950s science-fiction films such as Abbott and Costello Go to Mars (1953), Cat Women of the Moon (1953), Fire Maidens of Outer Space (1955), Queen of Outer Space (1958) that see outer space as a male sex fantasy that is populated by races of desirable women and no men. The downside of this is that, due to the very nature of the way that Voyage to the Planet of Prehistoric Women was made, the astronauts (which appear in footage that comes from the Russian material) and the mermaid women (which come from footage that was shot by Peter Bogdanovich) never end up meeting, which is usually the payoff in these other films. There is a cheesy corniness to the scenes of the blonde mermaid women lounging about on rocks and occasionally dipping into the ocean. For these scenes, Bogdanovich has simply cast a bunch of Malibu beach bunnies (including Mamie Van Doren as the leader of the group). The scenes of them in their seashell bikinis and low-rider flared pants with the tan lines clearly visible are rather silly.

The film has a very peculiar ending. The mermaid women end up tearing down their monument to the reptile god Terra, seeing it as useless, but then resurrect the robot that was abandoned in the middle of a lava flow by the astronauts (a scene from Storm Planet) and make it into their new god. It is a scene that has a weird B movie pulp poetry to it.