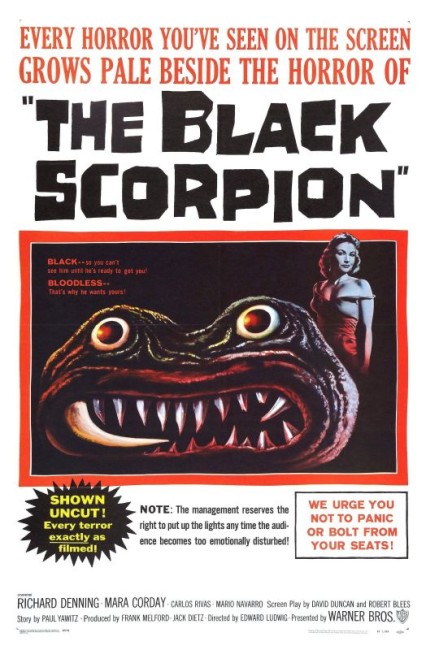 American geologist Hank Scott and his local counterpart Arturo Ramos arrive in the Mexican countryside in the aftermath of a volcanic eruption in the area. Something is slaughtering people and cattle and they puzzle over what it might be. They discover that the eruption has caused giant-sized scorpions to emerge from beneath the Earth and that these are now rampaging across the countryside.

The Black Scorpion has clearly been designed as a copy of Them! (1954). Them! had giant ants – and the only real difference here is that The Black Scorpion substitutes scorpions and does ot blame everything on atomic radiation (one of the few 1950s giant monster movies not to do so). The two films are structured in exactly the same way – the appearance of the menace in a lonely desert locale, the initial discovery of a ruined house, the puzzling over the body, the descent into the creatures’ lair, the creatures emerging to attack civilisation just when everybody thought the menace had been destroyed. All of this has been taken directly from Them!.

Directorially and in terms of plot, The Black Scorpion is routine. The plotting, the romance, the photography, the acting is completely standard and undistinguished 1950s B monster movie formula. What does stand The Black Scorpion above the routine are the scorpion attack set-pieces. These have been created by Willis O’Brien, who will always be remembered for the creation of King Kong (1933). Alas by the 1950s, O’Brien was in his 70s and in poor health and eking out a bare living creating stop motion for 50s monster movies like this and The Giant Behemoth (1958), which are among the few 1950s atomic monster films that could be bothered with the time-consuming expense of stop motion. The difference between The Black Scorpion and the other films, which mostly used men in rubber suits or optically enlarged bugs, is immediately apparent. With Willis O’Brien at work here, and even though he is operating on an impoverished budget, the creatures are invested with enormous detail and character that most of the other monster movies of the era lack.

Willis O’Brien creates some excellent set-pieces – the incredibly savage initial attack on the linesman where we see a scorpion pinning a man down on the ground and jabbing him with its tail; the wonderfully staged attack on the train, featuring exactingly cut and directed sequences with the scorpions attacking passengers and finally a battle between the scorpions themselves for domination; and the climax with the army battling the scorpions with tanks and copters.

The most imaginative sequence is the descent into the volcano. O’Brien creates it as a venture into a fervid realm filled with giant worms, baby scorpions and a series of immensely exciting fights between scorpions and worms and scorpions and scorpions, not to mention the scene with the scorpion attacking the elevator cage where the heroes shelter and their suspense-wrought climb back up.