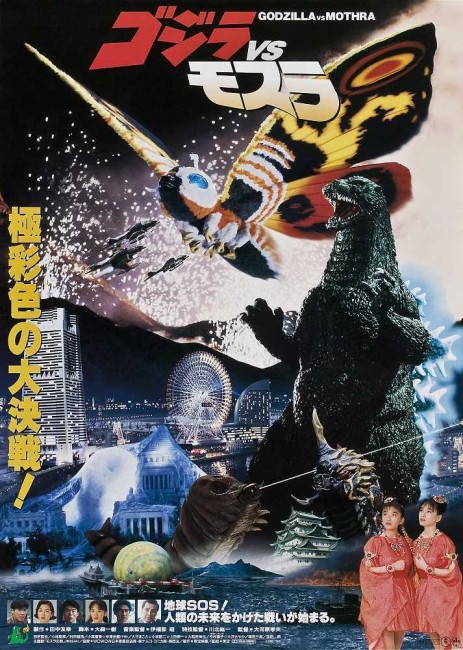 aka Godzilla vs. Mothra
(Gojira vs. Mosura)

Archaeologist Takuya Fujito is arrested after a tomb-raiding venture in Indonesia. He is recruited by Japanese officials who want him to investigate a meteorite that has fallen on an Indonesian island owned by the Marumoto Corporation. Takuya agrees and is joined by Marutomo executive Kenji Ando and his ex-wife Masako Tezuka, to whom he has been avoiding paying child support for their daughter. On the island, they encounter two miniature twins who call themselves the Cosmos who attend Mothra. They explain how Mothra and its evil half Battra maintained the balance of nature in ancient times and Battra has now returned because the Earth is falling into environmental ruin. The group then discover a giant egg. Ando immediately claims the egg on behalf of the Marumoto Corporation and makes plans to ship it back to Japan. On the return journey, the ship is attacked by Battra and Godzilla. In the midst of this, the egg hatches into the larval Mothra. Godzilla and Battra disappear beneath the waters fighting. In Japan, Mothra hatches from the larva into its full winged form and sets out to rescue the Cosmos twins amid much mass devastation. At the same time, Godzilla and Battra reappear for a showdown.

The Godzilla film has been with us since 1954 when it first roared onto screens in Godzilla (1954). This created the Japanese Monster Movie. Since then, The Big G has undergone an amazing number of revivals, battles with other monsters, anime and English-language versions in works varying between monstrous and heroic, serious and juvenile silliness. Godzilla and Mothra: The Battle for Earth was the nineteenth Godzilla film.

Godzilla appeared in a long series of films between 1954 and 1976. The series was then successfully revived with Godzilla 1985 (1984), which employed a full arsenal of modern animatronic effects, producing one of the best Godzilla films of the modern era. Toho had less success with the follow-up Godzilla vs Biollante (1989), which tried to introduce an original, new monster. They then decided to go with the tried and true and pitted Godzilla against one of his regular nemeses in Godzilla vs King Ghidorah (1991). For the next film, Toho polled fans on their favourite monster and this was found to be Mothra who was revived and pitted against Godzilla here. Godzilla and Mothra: The Battle for Earth was a reasonable success and Mothra was subsequently spun off into a trilogy of standalone films with Rebirth of Mothra (1996), Rebirth of Mothra II (1997) and Rebirth of Mothra III (1998).

The Mothra egg is now seen as an ancient artefact, while the film also introduces Mothra’s shadow self Battra (who has never appeared or even been referenced in any other Japanese monster movie). The film also bring the theme of Environmentalism to the fore with Mothra and Battra seen as embodying the force of nature and returning when it goes out of balance again. This comes with much reference to the way the corporation is seeking to exploit the egg, even including a scene where the company’s salaryman (Takehiro Murata) apologises for their abuse of the environment. The hero seems an attempt to co-opt something of the Indiana Jones films, albeit cast with an actor who barely looks old enough to have graduated.

The mass destruction effects are fairly good for this period (still several years before the point that the kaiju eiga started to adopt CGI). Some of the model shots look occasionally ropey but the majority of them are excellent. Godzilla is far less effective with glassy immobile eyes, just like he was back in the 1960s. The larval Mothra still looks just a giant turd and doesn’t seems to have changed in three decades either. All of that is silenced when Mothra emerges from the cocoon, a quite lovely sequence that director Takao Okawara plays for all the awe he can. The three monsters come together for an immensely enjoyable climactic battle.