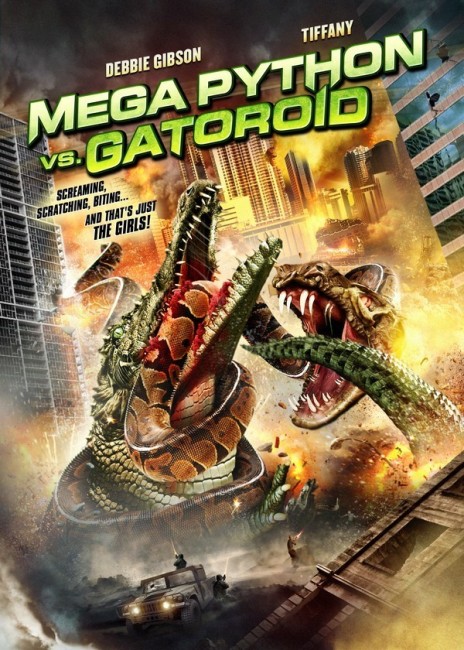 Dr Nikki Riley coordinates a team that breaks into animal research labs and rescue the snakes used in research and releases them into the Florida Everglades. However, Terry O’Hara, the sheriff in the area, must deal with the oversized pythons that are now killing the gators. As Terry organises the locals into a snake hunt, Nikki leads a protest, which ends up with a catfight between the two women. Terry’s fiance Justin is then killed during the snake hunt. In anger, Terry goes to a university lab and obtains supplies of a highly experimental steroid that she injects into chickens and feeds to the gators. Expert herpetologist Dr Diego Ortiz arrives and tries to warn that the gators have grown to giant size. Terry is unconcerned until giant gators and snakes attack a charity event. She and Nikki are forced to set aside their rivalry in order to fight the menace.

The Asylum is a company that has had some success in recent years specialising in low-budget films that come out mimicking the titles of big-budget, high-profile releases in the hopes that punters won’t look too closely or notice the difference. It is a strategy they call ‘mockbusters’ and has produced titles such as Snakes on a Train (2006), Transmorphers (2007), Allan Quatermain and the Temple of Skulls (2008), The Day the Earth Stopped (2008), The 18 Year Old Virgin (2009), Paranormal Entity (2009), Battle of Los Angeles (2011), Abraham Lincoln vs. Zombies (2012), Age of the Hobbits (2012) and others.

The Asylum lucked onto a new formula with Mega Shark vs Giant Octopus (2009), which threw the B killer shark film into an intendedly ridiculous title match up. Realising they were onto something, they spun Mega Shark off for three sequels. They reached a particular height in the couple of years after this with 2-Headed Shark Attack (2012) and the cult bad movie hit of Sharknado (2013), which have both produced multiple sequels. In the midst of this, riffing on the back of Mega Shark vs Giant Octopus, The Asylum also made Mega Piranha (2010), followed by Mega Python vs, Gatoroid.

One of the notable things about Mega Shark and its first two sequels was that The Asylum obtained a casting coup of sorts in bringing back 1980s teen pop queen Debbie Gibson, now in her forties, playing a scientist. Similarly, Mega Piranha gave a lead acting opportunity to Tiffany [Darwish], another teen pop queen from the 1980s. The stunt casting of Mega Python vs. Gatoroid is that it brings both singers back as the headline act (although playing different characters to the ones that they did in their previous outings for The Asylum). Neither is a terribly great actress – but is at least serviceable – which the film counters by pitting the two against one another in a bitch fight that tabloids of the 1980s must have had wet dreams about occurring in real life. Oh and not to mention that they get in-jokey lines that keep referring to the other’s hit songs throughout.

Elsewhere, the film is fairly typical fare for The Asylum. One aspect that must be commended is that the effects are of a generally higher quality than those that usually appeared in the company’s films around this period – even if some are recycled giant crocodile scenes from Mega Shark vs. Crocosaurus (2010). Mary Lambert has a sense of the intentional absurdity of the exercise and, while playing the show relatively seriously, gives Tiffany lines like: “Feeding steroids to gators. What can possibly go wrong?” in a scene where she obtains a bunch of chicken carcasses and stands by the water’s edge tossing them to the gators.

The highlight of the film is not any of the monster attack scenes but rather a real knock-down-drag-’em-out fight between Debbie Gibson and Tiffany in the midst of a celebrity dinner at the same time as it is also being invaded by giant gators where the two keep upturning tables, throwing food, punching and trying to drown one another inside the nearby river oblivious to the attacking gators.

The film also features what must be the most high-profile director to have ever taken on one of The Asylum’s films – Mary Lambert. Lambert gained fame as a music video director in the early 1980s, in particular for some of Madonna’s first videos. She made her directorial debut with the deathdream fantasy Siesta (1987), before having a hit with the Stephen King adaptation Pet Sematary (1989). Her other genre films are Pet Sematary II (1992), the psycho-thriller Face of Evil (tv movie, 1996), the teen psycho-thriller The In Crowd (2000), Halloweentown II: Kalabar’s Revenge (2001), the horror anthology Strange Frequency (tv movie, 2001), Urban Legends: Bloody Mary (2005) and The Attic (2008).