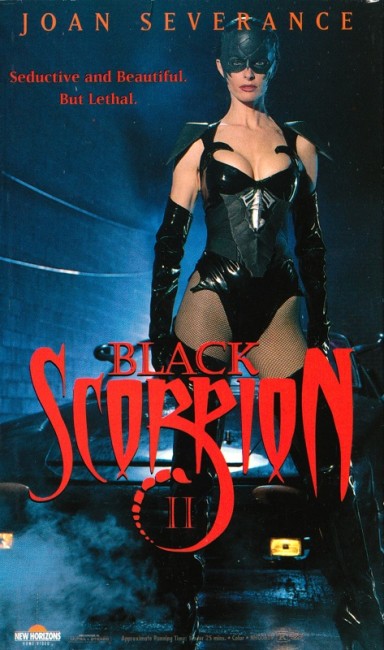 Darcy Walker has been called a hero for her apprehension of the Breath Snatcher but does not feel that she deserves it. At the same, she also experiences problems maintaining both a work and personal relationship with her new partner Rick. Meanwhile seismologist Ursula Undershaft invents a system to neutralise earthquakes but this is sabotaged by the greedy mayor of Angel City, who believes that eliminating earthquakes would lose the kickbacks he receives from the building industry. Shattered, Ursula reinvents herself as the villainess Shockwave and turns the device against the city, creating instead of neutralising earthquakes. Darcy sets out to stop her as Black Scorpion. Realising that Black Scorpion presents a danger to her, Ursula breaks the insane clown The Gangster Prankster from jail and gives him the mission of stealing away Black Scorpion’s source of power – the Scorpion Mobile.

Black Scorpion: Ground Zero is the sequel to Black Scorpion (1995), a B-budget masked superheroine movie that screened on cable. Ground Zero reunites all the principal talents from the first film – director Jonathan Winfrey, screenwriter Craig Nevius, actress Joan Severance (who also takes a co-producer credit this time), as well as supporting cast members Garrett Morris, Terri J. Vaughn and Stephen Lee. Conspicuously missing is Severance’s co-star and love interest Bruce Abbott from the first film – she has a new partner in Whip Hubley (who peculiarly has the same name as Abbott’s character on the end credits but is referred to as someone different throughout). Also on board this time is legendary low-budget producer Roger Corman.

As was the case with the previous film, Black Scorpion: Ground Zero is cheaply made. The car chase sequences look extremely penny-pinched – all the action is shot in tight closeups in order to minimise the scale of the action. This one also has a lot more of an unserious tone than the previous film – we even get cartoon sound effects as objects bounce. Nevius’s script, as before, blatantly copies from other comic-book sources – the villain The Gangster Prankster is a shameless copy of Batman‘s The Joker, while the character’s look has been taken directly from the Batman villain Two-Face. (Stoney Jackson’s lunatic overacting and falsetto screech soon becomes really, really annoying in the part).

On the other hand, the villainness Aftershock is ludicrous. Her earthquake theme is rather of a dead-end as supervillain motivation goes, and decked out in red vinyl and football helmet, she looks more like a female wrestler who has strayed in from the WWF than a supervillainness. Her motivation – that she dresses up in this gear and attempts to destroy the city because someone tried to sabotage her experiment – is absurd, although none more so than her abrupt change from supervillainness to self-sacrifice at the end. As in the first film, Joan Severance is humourless and simply can’t do one-liners.

This was followed by a tv series, Black Scorpion (2001), which only lasted for 22 episodes, where Severance was replaced by Michelle Lintel. This led to a further made-for-video movie Black Scorpion Returns (2001) featuring Lintel.