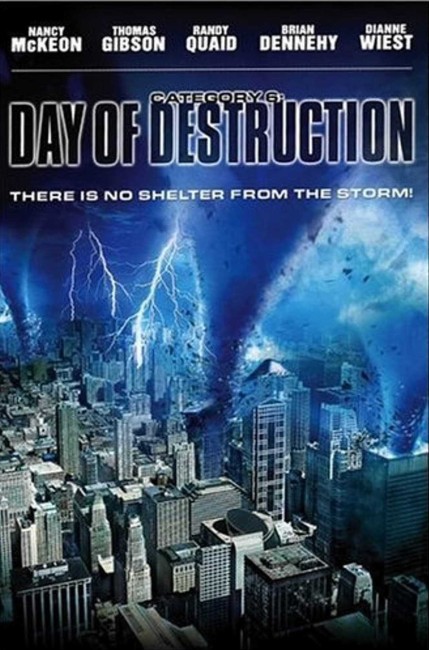 The Severe Weather Center in Oklahoma is concerned as a powerful tornado moves up through the Midwest at the same time as a hurricane is coming across Lake Michigan. At Midwest Electric in Chicago, controller Mitch Benson is struggling to keep the power grid up during a heatwave. TV reporter Amy Harkin talks to Dan London, a programmer at the local power supplier Lexer Energy Corp, who voices concern over how Lexer’s computer systems are unprotected, leaving them wide open for attack by hackers. Almost immediately after, a hacker targets the grid, shutting down power across the city. As Mitch struggles to get the system back up, the two storm fronts converge on Chicago to combine into the most powerful and destructive storm in recorded history. In the midst of the devastation, Amy’s pregnant sister is trapped in an elevator. At the same time, Mitch’s wife is imprisoned inside a bank by their daughter’s boyfriend who has gone out of control, wielding a handgun, upset over her splitting up with him.

This tv mini-series was clearly made with the intent of cashing in on the success of Roland Emmerich’s The Day After Tomorrow (2004), which concerned the US being hit by a massive superstorm created by global warming. Category 6: Day of Destruction seems to be trying to create the same sort of superstorm drama for the small screen.

Indeed, Category 6 seems to be a mini-series that is trying to be a little bit of everything, throwing a dash of every other then recent disaster movie – there are the multiple storm fronts converging to create a superstorm as in The Perfect Storm (2000); there’s the mad tornado chaser a la Twister (1996); there’s the power blackout story, which has been done in numerous tv movies. On top of this, the series throws in a substantial subplot about a corporate whistleblower revealing dirty goings on at the power provider. For much of the four-hour running time, you are not sure if you are watching a storm disaster story (with the series providing not just one but two storms), a power blackout story, a power politics story, a corrupt company/whistleblower story or some melange of all of the above. The show does at times seem schizophrenic in hopping between all these things going on at once, not to mention the various interwoven personal melodramas.

The one thing you cannot accuse the show of being is ill informed about its various subjects. It even offers up several info dumps – about the Fujita or F-scale for measuring tornado intensity, about the vulnerabilities and problems of running power systems, and some entry-level discussions on Chaos Theory and the Butterfly Effect. Where the mini-series is quite interesting is in its discussion about the politics of power grids, providers and governmental regulators in the USA. It is here that the writer has clearly done his research, if not had some background in the field themselves.

The second part of the show less interestingly dissolves into stock disaster movie clichés and dramatics. The climax hangs on the hard to accept scheme of the pregnant woman’s Air Force husband landing a plane in the eye of the storm to rescue the various characters. Also the hacker’s scheme is really hard to believe – that the whistleblower is in fact the one behind the hack-in doing so in order to alert people to the flaws in the system.

All the drama is populated by cliché characters – the slick and ruthless yuppie CEO villain; the pregnant woman who goes into labour in the midst of the disaster; the person responsible for the disaster who redeems himself for his mistake by sacrificing his life; the teenager who goes out of control with a gun; the reckless old timer chasing the disaster yelling “Yee-hah”. It’s all a very nice production, one that appears not to ever have the heart to approximate the true loss of life that extreme weather does – the only characters that are killed throughout are the villains or those who have erred on the side of bad and are bound to pay by sacrificing their lives. (Randy Quaid’s mad tornado chaser disappears up into the tornado in his SUV but the series is so nice that his actual fate is never specified beyond seeing his vehicle flying off).

The show reaches a passover ending where we realise that the entire disaster has come with a redemptive effect for all concerned – new life has been brought safely into the world; the bad corporation responsible has been exposed; hero Thomas Gibson gives up his mistress to return to his family; the characters who strayed from the path of good managed to redeem themselves by sacrificing their lives; and the US government agrees to change power regulations to ensure this never happens again.

The major problem with the series is that it only offers up mass destruction on a B-budget. The special effects are not that special – especially unconvincing is a CGI sequence where the propeller of a wind turbine comes loose and crashes onto a very obviously computer-generated truck.