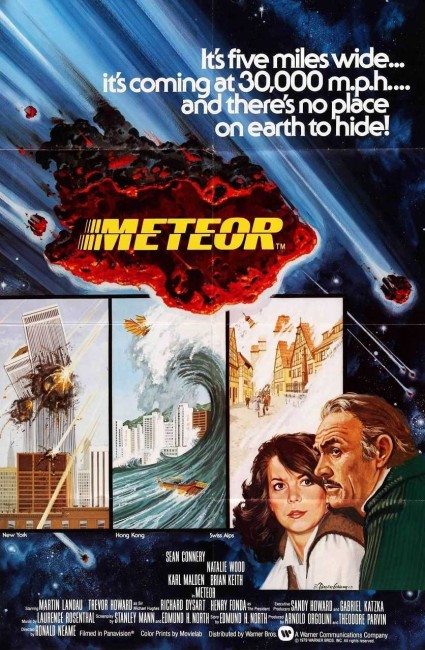 Former NASA program director Paul Bradley is recalled by the agency at great urgency. He learns that astronomers have witnessed an impact between a meteor and an asteroid. The resulting explosion has placed a meteor five miles wide on a collision course with the Earth. When he was working at NASA, Bradley designed Project Hercules, an orbiting satellite armed with nuclear warheads that would be fired to deflect the meteor in such an eventuality but quit after the project was taken over by the military and the missiles turned to face the Soviet Union. They calculate that the missiles aboard Hercules will not be enough to deflect the meteor. Believing that the Russians have a similar satellite in orbit, The President makes the decision to contact them. Both countries reluctantly come together to admit the mutual existence of their missile platforms and agree to combine forces to deflect the meteor. Meanwhile, advance shards from the meteor are striking parts of the Earth, causing mass devastation.

The disaster movie was a genre peculiar to the 1970s. The genre fairly much began with the hit of Airport (1970) but went stellar with the twin successes of The Poseidon Adventure (1972) and The Towering Inferno (1974) from producer Irwin Allen. These were followed by a great many other efforts offering up large scale disasters – three Airport sequels, Earthquake (1974), Juggernaut (1974), The Hindenburg (1975), The Cassandra Crossing (1976), Rollercoaster (1977), Avalanche (1978) and Hurricane (1979) to name the most well known. (For a more detailed overview of the genre see Disaster Movies).

The disaster movie soon became the equivalent of a cinematic circus. It focused around two things – providing large-scale spectacle and destruction for our edification, and secondly, bringing together as many stars as it could under the same roof. The big cataclysmic dramas were frequently absurd, although not as much as the personal dramas taking place in the margins, while the acting from the star names present attracted much in the way of ridicule in the years after the disaster movie fad passed. Whatever one says about the absurdity of the disaster movie, it was one of the most popular box-office fads of the 1970s.

Meteor was shot in 1977 when the disaster movie was at the height of its fad. However, due to the amount of time needed for some $2.5 million worth of special effects reshoots, it was not released until October 1979 when the fad for disaster movies was well on the wane. In the meantime, Irwin Allen, the man behind the two biggest hits of the fad, had produced a succession of bloated and widely ridiculed stinkers such as The Swarm (1978), Beyond the Poseidon Adventure (1979) and When Time Ran Out/The Day the World Ended (1980), which ran the disaster cycle into the ground. More to the point, the genre had reached a point of parody around this time, being wittily skewered in the likes of The Big Bus (1976) and Airplane/Flying High (1980).

When Meteor arrived amid this, it sank amid bad reviews. It only earned back half of its $16 million budget and its failure proved the financial collapse of AIP (American International Pictures), a studio that has gained a reputation in the 1950s/60s for its low-budget monster movies, beach party films and was of course home to Roger Corman for a number of years.

There were certainly enough things present that Meteor should have emerged well. The director was British-born Ronald Neame who had made classic films such as The Prime of Miss Jean Brodie (1969), the abovementioned The Poseidon Adventure and the other odd genre movie such as the musical Scrooge (1970). Screenwriter Edmund H. North has a great many classic credits to his name including The Day the Earth Stood Still (1951), Patton (1970) and a number of Westerns and war movies of the 1950s and 60s.

Meteor is generally ridiculed. One of the frequently cited reasons for this are its special effects, which modern genre pundits pour much in the way of derision on. This does need to be seen in some perspective where the case is not as laughable as made out. Firstly, the effects in Meteor are no better or worse than they were in any other of the above listed disaster movies; they are precisely average for what was expected in the day.

The second point is that they vary considerably in quality. The shots of the meteor and the missiles are neither here nor there, however some of the opticals are extremely shoddy. Some scenes – notably the avalanche that hits a Swiss skiing village and the tsunami that floods Hong Kong – fluctuate wildly between some very good shots of waves sweeping through the streets, avalanches overwhelming a town and other shots that come surrounded by thick matte lines. There is a reasonable climactic sequence with a meteor shard striking New York (although modern tv screenings of the film cut out the scenes where the Twin Towers are obliterated).

I am however partly prepared to defend Meteor, certainly more than some of the other naysayers. It is by no stretch of the imagination what one might actually call a good film. However, it does have certain rarities to the disaster genre like a competent dramatic screenplay. There is a lack of the usual soap operas centred around the supporting cast, for one. This does however result in a film that is mostly concentrated around people in a control room looking at a screen and then cutaways to various parts of the globes being devastated by strikes at regular intervals. This is perhaps the reason why the film climaxes on a sequence where a shard hits New York, which seems to have been inserted to finally involve the cast in the drama on a personal level as they struggle out through a subway tunnel that is flooding with muddy water.

The most interesting aspect of Meteor is how the screenplay comes less focused around personal melodramas than it does a global political situation, how the US-Soviet standoff of the day must put its mutual antipathy and distrust aside and unite together against a common menace. This is very similar to Edmund H. North’s The Day the Earth Stood Still where he created an agency from beyond earth (an alien visitor) and saw that this would be the thing that would bring the differing sides of humanity together and get them to put their conflicts aside. As in The Day the Earth Stood Still, North also sees that the true aggressors are the military, while it is the cool-headed scientists who will ultimately put petty political differences aside and become the peacemakers.

The name cast – always important to a disaster film – fulfil their expected functions. It is a wonder that Karl Malden, an actor born to be in the disaster films with his priceless ability to dramatically bludgeon every nuance out of a reading, had not appeared in the genre before. Martin Landau, another wooden and thoroughly overwrought actor (at least at this point in his career), is in hysterically histrionic mode and gives one of his worst performances ever and it proves an absolute hoot. Natalie Wood appears like the three-month old icing on a wedding cake and gets to do almost nothing, despite receiving second billing – the film keeps wanting to create a romance between her and Sean Connery but the film fades out with no more than a polite goodbye at the airport.

Sean Connery presents the resolute hard-headed certainty he always does but even he is lumbered with clunky lines like: “Why don’t you stick a broomstick up my ass so that I can sweep the floor on the way out?” It comes as even more of a surprise that there is good acting in the film, namely from Brian Keith whose wily wit makes for some of the better moments – typically for the film, the best performance is one given with only a single sentence in English.