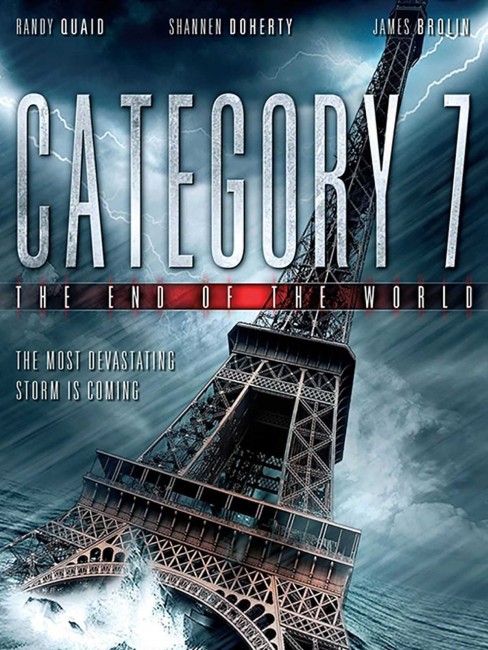 Following the Category 6 storm that devastated Chicago, the newly appointed FEMA director Judith Carr determines that all effort must be made to combat the threat as new superstorms devastate Paris, Egypt and various US cities. This means resurrecting the controversial theories of her former love Ross Duffy, a brilliant meteorologist who predicted the locations of all the recent storms but whose theories were suppressed by Washington because they were seen as being bad for oil industry business. Meanwhile, televangelist Donny Hall’s wife Penny tries to exploit the disasters, claiming they are evidence of divine wrath. To this extent, she despatches her assistant Monty to fake Biblical plagues of flies. Duffy discovers that global warming has caused chunks of the mesosphere to fall, which then collide with the storms, causing them to become superstorms. Two of these superstorms start to converge on Washington D.C. where Duffy predicts they will combine to create a heretofore unheard-of Category 7 superstorm that will totally decimate the city. They try to convince Washington to turn off all power in order to stop the heat funnels that feed the superstorms but this falls on deaf political ears. As all families, including both Judith and Duffy’s teenage children, are evacuated from Washington, a rogue Monty abducts them in order to make it seem as though the Biblical curse of the death of the firstborn is about to be enacted.

Category 7: The End of the World is a tv mini-series sequel to the earlier Category 6: Day of Destruction (2004), a routine disaster mini-series about Chicago being devastated by a superstorm. Category 7 ups the scale of the disaster – to the extent that it creates an entirely fictional storm rating scale of Category 7 (only six categories exist on the Fujita scale for measuring the devastation caused by hurricanes and tornadoes from which the mini-series’ take their name – and even then Category 6 is only a speculative category that has yet to be observed in modern extreme weather events). The only returnees from Category 6 are Randy Quaid who reprises his role of the madcap tornado chaser and director Dick Lowry.

Category 6 was routine and Category 7 is a superior work in all regards. At the same time as it ups the scale of the disaster from its predecessor, Category 7 also serves to develop the premise of both series out into a decent science-fiction story. The scenes explaining the origin of the storms as being due to falling chunks of mesosphere is ingenious and there is an imaginative scene where we follow a fighter plane as it flies directly into a hurricane swinging a data sled behind it on a long cable.

The script is much better dramatically than Category 6, with all the incidental soap opera dramatics that usually take place in these disaster stories having been eliminated. That said, there are some contrived and overhyped dramas in the last half-hour – various scenes with Cameron Daddo stuck in a seatbelt in a vehicle, the kids escaping from their abductors, and a silly bit with Andrea Lui trying to rescue David Alpay after his arm becomes stuck behind a pipe. The other silly bit, endemic also to Category 6, is that the various storms do seem very nice – only ever managing to kill bad guys such as Kenneth Welsh’s corrupt politician and the terrorists, with the sole exception here being Tom Skerritt’s aging pilot.

Category 7 is much better directed than Category 6 was. Director Dick Lowry makes some amazingly vibrant uses of colour throughout. Each scene seems to come colour coded with its own lighting scheme. There is a particularly lovely opening scene in Paris, which manages to use just about every colour in the rainbow cinematographically. There are some excellent CGI effects, which are an enormous improvement over the work in the original. The destruction of the trailer park by a tornado is much more credible in the depiction of its mass devastation and panic than the entirety of the original mini-series’ climatic scenes. Particularly fabulous are the effects shots that come during the destruction of Mount Rushmore. On the minus side – more a conceptual failing than any effects shortcoming – is that while we do see the mass destruction of Washington D.C., Paris and the Valley of the Kings in Egypt, this does fall somewhat short of what is promised by the film’s subtitle The End of the World.

Maybe Category 7‘s biggest credibility gap is not any of its science or meteorology but rather the casting of former Beverly Hills 90210 (1990-2000) brat Shannen Doherty as a meteorology grad student. The even bigger credibility gap is the ludicrous pairing that comes in seeing her hook up with Randy Quaid at the end – indeed, the show ends on a laugh as they depart together as though even the filmmakers realised how absurd an idea the pairing is. Gina Gershon gives a professional performance in the lead role. Although the scene stealer of the show manages to be Canadian actress Lindy Booth, who just started to emerge around the same time with roles in films like Dawn of the Dead (2004) and Cry Wolf (2005) and has a clear future ahead of her.

In some ways, watching Category 7 in 2006 has dated the film, particularly in the aftermath of Hurricane Katrina. The assumptions the mini-series makes in showing the likes of Homeland Security and FEMA to be the good guys of the show have fallen flat with real-life revelations having shown both to be inept, bumbling bureaucracies. Nevertheless, Category 7 does manage to throw in a degree of barbed political commentary. Kenneth Welsh’s Homeland Security director is cast as the villain of the show – Welsh also played the part of the ignorant Vice President who refused to acknowledge environmental problems in the very similar extreme weather disaster movie The Day After Tomorrow (2004) and is playing fairly much the same role here. Likewise, Category 7 is critical of the US’s failure to sign the Kyoto Accords that were intended to establish a global agreement on the reduction of greenhouse gases. Some of the digs the show makes subsequently proved highly prophetic of the real world, most notably the hero who ends up being vindicated when a disaster shows up how his environmental report was edited by Washington because of political convenience.