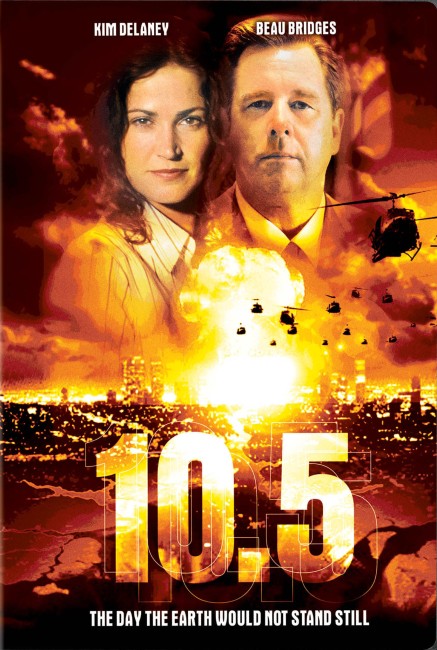 A massive earthquake hits Seattle, toppling the Space Needle. Seismologist Samantha Hill has the theory that a vast faultline runs down the entire West Coast, so deep that it cannot be detected by traditional instruments. Her theories are regarded as controversial but people are prepared to listen to her as increasingly more severe earthquakes are felt further down the California coast. The President takes the step of evacuating all people in California into neighbouring states in the fear that the quakes might trigger the San Andreas Faultline. Samantha realises that the only way to stop the nearing super-quake is to detonate nuclear warheads along the path of the faultline and fuse the rock back together.

10.5 is a disaster tv mini-series. It buys into the great Californian myth – the belief that some day that San Andreas Faultline is going to quake and pitch most of the state into the Pacific Ocean. The idea is so prevalent it is a surprise that nobody has ever thought about making a movie out of the idea before this. There have been a couple of halfway stabs – super-villains attempted to artificially trigger a quake with atomic devices in both Superman (1978) and the James Bond film A View to a Kill (1985), which ended with both scheme foiled, while Escape from L.A. (1996) was set in a future after such a quake had occurred. There certainly have been other films about quakes on the San Andreas with Earthquake (1974) and San Andreas (2015), although both of these ended with the geologic landmass still intact.

10.5 has a kickass dramatic opening – one where we follow a cycle courier as he attempts to outrace the collapsing Seattle Space Needle. The scene is a wonderful dramatic opener and contains some fairly convincing effects for a mini-series of this type. Alas, the filmmakers have kept the best sequence for first and there is nothing else in the show that manages to match such.

The mini-series gives the impression of having spent about ten minutes researching the topic of volcanology on the internet and then spent the rest of the time trying to create a sense of verisimilitude with busy cutting back and forward between multiple plot locales and lots of roving camerawork. The big realisation that one gets halfway through the mini-series – of which one has to grit their teeth through four hours worth of screen time – is that not a whole lot ever happens and that the mini-series seems to take forever to let the little that does happen happen.

Indeed, it is a mini-series where almost nothing is ever done by the characters – John Schneider and daughter Kaley Cuoco wander through the woods and almost become caught in a landslide; doctors Ivan Sergei and David Cubitt stand around in a hospital and watch the tv screen the entire time. An indication of the mini-series’ attempt to drum up faux drama is surely a scene where we have a technician conducting a breathless countdown as we watch a nuclear warhead being routinely lowered into a hole in the ground (it is well over an hour of screen time before it will even be detonated).

All the drama gets contrived. The sacrifice of Fred Ward comes with completely fake heroism. Why, for one, does the head of FEMA need to personally direct the lowering of nuclear warheads down into shafts? The scenes where he decides to personally descend the shaft and free the warhead ring as absurdly false drama. There is a fine special effects sequence with the Golden Gate Bridge collapsing but a weak and unconvincing one with a faultline seemingly pursuing a train. And then there are some pieces that are just sloppy – like the headline that comes across the tv in the background that talks about the imposition of ‘Marshal Law’.

What is noticeable is the difference between the fictional depiction of a statewide disaster that we see here and how such a thing happened in reality with Hurricane Katrina not long after the mini-series aired. 10.5 jumps in and dramatically joins the heroes as they get away from the disaster and has no real conception (or concern) that there might be people left behind. Everyone here it appears has ready transport to get away from the city. Moreover, 10.5 also depicts FEMA as the capable heroes of the day, not the lumbering bureaucratic dinosaur it turned out to be in actuality. If 10.5 were a mini-series that concerned Hurricane Katrina instead of a fictional East Coast quake, the heroes of the show would be those bravely trying to hold the levees and the drama would join those in the peril-filled journey to escape the city and eventually get to freedom before the flood came. Had 10.5 been made after Katrina it would almost certainly have been a different disaster story concerned with stranded survivors. As it is, 10.5 is a disaster mini-series that comes without any tragedy.

There was a sequel with 10.5: Apocalypse (2006), featuring return performances from Kim Delaney and Beau Bridges.