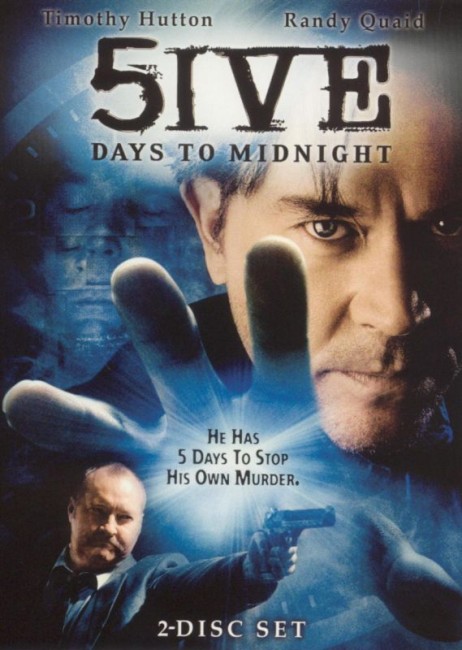 John ‘J.T.’ Neumeyer, a physics professor in Everett, Washington, is visiting his wife’s grave when he finds a briefcase left there that has his name on it. After taking it home and cracking the combination, he is startled to find that it contains a police report and crime scene photos that reveal he will be shot at a strip club in five days’ time. Initially dismissing this as a hoax, he then finds that elements in the report, including the name of the investigating detective Irwin Sikorski, are real. Believing the briefcase has been sent back from the future, he sets out to try and stop his fate, as well as prevent other incidents that the items in the briefcase indicate will happen. The report also contains a list of suspects, which include J.T.’s girlfriend Claudia Whitney and his brother-in-law Brad. J.T.’s investigation stirs courses of events into action, including having mobsters coming after him, along with people wanting the briefcase and a mentally disturbed colleague not wanting J.T. to prevent his fate lest the universe fall apart.

5ive Days to Midnight was a tv mini-series. The novelty of the series was that it aired in five one-hour episodes over five successive days, each of the days being the actual days mentioned as the ones on which the story is taking place in the script. The show was produced by Hallmark Entertainment, the now defunct production arm of the Hallmark cable channel in the US. Hallmark produced numerous tv movies and mini-series that have adapted classic books, fairy-tales and myths between the 1990s and late 2000s, along with original works such as this. (See below for Hallmark’s other genre productions).

There have been a great many films dealing with clairvoyance and precognitions of the future. Everything from psychic thrillers like The Night My Number Came Up (1955), Baffled! (1972), The Dead Zone (1983), the Final Destination films and Next (2007) to more esoteric versions like Don’t Look Now (1973) and Donnie Darko (2001). 5ive Days to Midnight joins a lesser handful of these that might include Minority Report (2002) and Paycheck (2003) where the vision of the future comes with a science-fictional explanation. The theme of messages from the future probably comes closest to the tv series Early Edition (1996-2000) in which Kyle Chandler would wake each day with a newspaper headline foretelling a tragedy, which he would spend the rest of the episode setting out to prevent. Even closer is the short-lived British tv series Paradox (2009) where freak astronomical conditions allow the transmission of images from the future and a special police team was set up to prevent the catastrophes from happening.

As 5ive Days to Midnight starts in, there seems something desperately unoriginal about it. The plot that runs throughout the series – of a man who receives a prophecy of his own future and sets about trying to prevent it from occurring – has a tedious familiarity to it. What kills the mini-series is the fact that the proceedings are dragged out over five one-hour episodes – something that agonisingly extrudes what should have at most been no more than a standard feature-length story. The show becomes endlessly padded with pieces of side drama about Kari Matchett and her fake identities and mobster husband, brother-in-law David McIlwraith’s financial problems, the mentally deranged Hamish Linklater running around and so on.

The mini-series is directed by Michael Watkins, who has been at work on numerous other tv series since the early 1990s without any seeming ambition beyond that. At every possible occasion, Watkins’s dramatics are utterly banal. It feels like the entire series has been composed of little pieces of canned filler dramatics used to pad out every other tv show he has ever worked on and delivered entirely by autopilot.