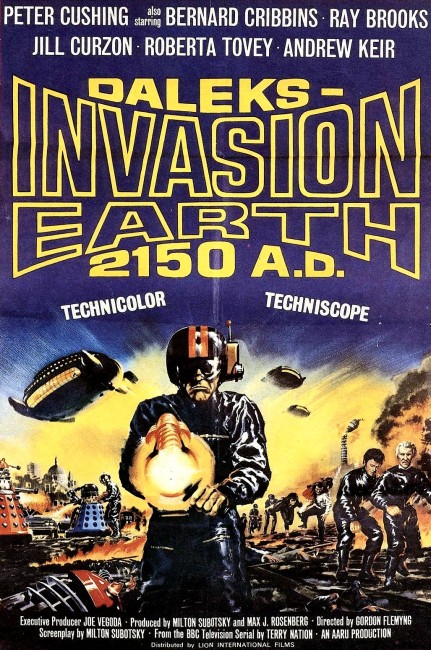 Police Constable Tom Campbell witnesses a jewel theft and runs into a police callbox to get back-up in apprehending the thieves. However, the phonebox happens to be Doctor Who’s Tardis and he is instead whisked away to the year 2150 with the Doctor and his two granddaughters Louise and Susan. There they find a London that has been reduced to ruins after an invasion by the Daleks and their zombified human Robo-Men. The Doctor and companions are captured and taken to be used as part of the Dalek slave labour force, mining the core of the Earth in order to turn the planet into a giant Dalek spaceship. There Tom, The Doctor, Lousie and Susan join a human resistance movement against the Daleks.

Daleks’ Invasion Earth 2150 A.D. was the second of the films adapted from the tv series Doctor Who (1963-89, 2005– ) by Britain’s Amicus Pictures. It had been preceded by Dr Who and the Daleks (1965). Both films were intended to exploit the fad for Dalek-mania that had been created by the tv series. Daleks’ Invasion was adapted directly from the six-episode story The Dalek Invasion of Earth (1964) by Terry Nation, which appears in the second season of Doctor Who. This script had been the second story in which the Daleks appeared.

The dubious recommendation is that Daleks’ Invasion Earth 2150 A.D. is at least a better film than its predecessor. Most of the same personnel from the first film are reunited here – Peter Cushing as The Doctor, Roberta Tovey as Susan, Amicus producers Milton Subotsky and Max J. Rosenberg, Subotsky on script and director Gordon Flemyng.

Thankfully, Daleks’ Invasion has dispensed with the irritating buffoonery of Roy Castle who dragged down the previous film in a major way. The role of Ian from Terry Nation’s original script is replaced by a British bobby played by Bernard Cribbins, a comedy actor who appeared in various Carry On films among others. Cribbins is intended to fill more or less the same role that Roy Castle played in the first film and at least proves less irritating. Although he does take part in one awful slapstick scene pretending to be one of the Robo-Men, which becomes cringe-worthy for its sloppy choreography of overweight men in plastic overalls.

Even though its production values were sub-Edward D. Wood Jr, the original tv version of the story, The Dalek Invasion of Earth, was a grim and dramatic survivalist piece. The film is far better budgeted but the flashy sets and blinking lights reduce the survivalist story to the trivial, flashing ‘sci-fi’ of an Irwin Allen tv show like Voyage to the Bottom of the Sea (1964-8). The action becomes frequently difficult to believe – the gawky and slow-moving Daleks are too ludicrous to be fearsome – victims have to stand and pose to be hit as they step out of cover.

Peter Cushing’s role is markedly improved over the first film and the under-appreciated Roberta Tovey again appears with freshness and intelligence, although Jill Curzon’s character of Louise is badly underwritten.

Daleks’ Invasion Earth 2150 A.D. did not fare well at the box-office and so Amicus cancelled plans to make a third Dalek film, which would have been based on the tv story The Chase (1965) and would have featured the Daleks pursuing The Doctor and companions through different eras of time. Bernard Cribbins later returned to play the ongoing role of companion Catherine Tate’s grandfather in the modern tv revival Doctor Who (2005– ).