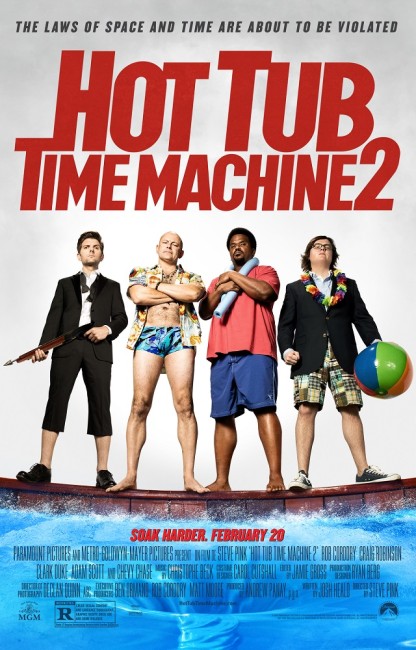 Following their venture through the Hot Tub Time Machine, Lou has become the head of the massive internet corporation Lougle and Nick a hit singer with appropriated songs. Jacob is treated badly by Lou and resents his father for his wild party lifestyle. Adam meanwhile has gone on a sabbatical. Lou is holding a party when someone in the room shoots him in the crotch with a shotgun. Jacob realises that the only hope is to whisk Lou into the hot tub. They emerge in the year 2025. There they try to adjust to a future where they are now has-beens. From the hot tub repairman, they realise that the only hope to prevent Lou from being killed is to search out and stop his killer who comes from this future. In going to find Adam, they instead meet his just-about-to-be-married son Adam Jr. He joins them as they search through the possible suspects for Lou’s killer.

When you consider a list of all the great novels out there that would fantastic films, all the great untapped themes – will somebody ever make a decent alternate history or a full-blown steampunk film? – when you look at the Hollywood Black List of the top unproduced screenplays, when you look at all the films that deserve follow-ups, the burning question you are then left with is why on Earth someone thought a sequel to Hot Tub Time Machine (2010) was far more deservous of devoting a budget to than any of these.

Don’t get me wrong, I thought Hot Tub Time Machine, for all its crude and raucous humour, was far more likeable than it had any right to be. It is just that you feel its concept lacks any legs to go beyond its lightweight premise to make a series. Was there anybody, you wonder, during the production process that actually sat down and thought – is there an audience out there in the world that is queuing around the block to see a Hot Tub Time Machine sequel? Apparently not, as the film bombed completely at the box-office after opening.

You could coin the soundbite comment and say that Hot Tub Time Machine 2 is Back to the Future Part II reconceived by way of The Hangover (2009). This in a way is the fundamental problem of conception from which Hot Tub Time Machine 2 suffers . The first film was an amiably coarse comedy premised around a bunch of characters confronting their own past with some mildly clever culture clash jokes and time travel twists thrown in; this film is premised around three of the four central characters from the first film engaged in coarse and vulgar exploits and with some very occasional time travel elements added to the mix.

Largely, this is a film centred around its actors, most notably Rob Corddry and Craig Robinson. John Cusack, the star and a producer of the original, is very noticeably absent. One assumed that this had something to do with Cusack not doing sequels or liking the script but Cusack issued a statement to the effect that nobody even asked him to come back, which is odd considering that the director of both films Steve Pink has been a long-time friend of his.

Essentially, the sequel has been set up to let Rob Corddry and Craig Robinson go for it. Their scenes end up being astonishingly vulgar – one where Craig Robinson is required to have sex with Adam Scott via virtual reality on television; Adam Scott given a drug that causes him to wildly hallucinate and then an ER scene that involves a very large syringe being jabbed into his engorged testicles and everyone being splattered with goo. In the original film, Rob Corddry owned the show with his loud and raucous presence, taking over every scene he was in. The sequel seems to assume we want more of the same and so winds Codddry’s obnoxiousness up by a factor of ten – but when it comes to the opening scenes with him going on about rouged nipples and punking a female associate to look out the window to see someone’s genitalia pressed up against it – the effect is now tiresome.

There is a mild amusement about some of the gadgets of the future – especially an automated car that decides it has to kill Rob Corddry – but the rest of the film and especially the time travel twists feel perfunctory. The crude and rude comedy seems to be all that Hot Tub Time Machine 2 has going for it. In the first film, there seemed more of an innocence to the characters and it was actually funny, now it seems like the equivalent of the loudmouth at the party who is in everyone’s faces demanding attention for what a wild party animal they are being.

You are not required to look too carefully at the logic of any of it. Sase in point being how a trip into the future somehow magically cures Rob Corddry from a fatal shotgun blast to the crotch – you would think that all that this would do is transport a fatally wounded man into the future. Or in that several times we see the characters’ present selves inhabiting their older bodies leading to the assumption that the time travel is all mental, all this would surely do is leave a wounded Rob Corddry in the tub back in the present (with not long left to live) while his mind travels forward.

You get a sense of how indifferent the film is to logic or its characters by the jolt surprise that comes right at the end as a double of one of the characters emerges through time from the hot tub and blows his counterpart’s head off with a musket. This gets an audible gasp from the audience at the audacity of killing off a main character. Without even missing a beat, the new version has everybody else jump into the hot tub to go and sort out American history, which becomes an excuse for a montage of historical party shots over the end credits. The almost indifferent killing of a core cast member and the lack of any surprise by everybody else to the killing of their friend is just another example how miscalculated this film is.