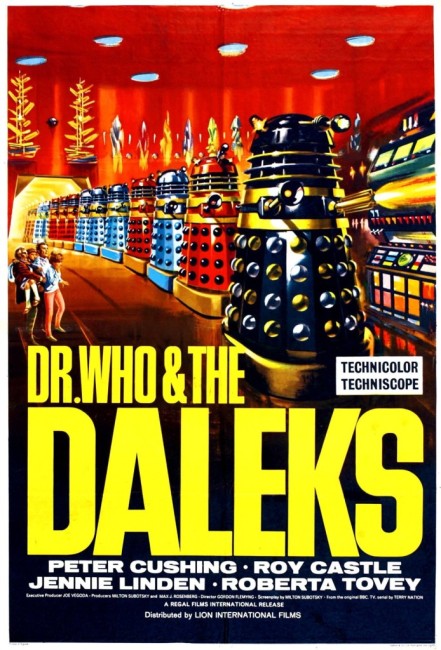 The eccentric inventor Doctor Who shows his grand-daughter Barbara’s boyfriend Ian his time machine but Ian’s bumbling accidentally sets it in action. The Doctor, Ian, Barbara and The Doctor’s other granddaughter Susan are whisked away to the planet Skaro. There they discover Skaro has been devastated by nuclear war. They come upon a metal city where they are captured by the Daleks, evil mutants that live inside machine casings. The Daleks seek to eliminate their enemies the Thals. However, The Thals have sworn a vow of pacifism following the nuclear war. It is up to Ian and The Doctor to inspire The Thals to stand up to save themselves and lead an attack to stop the Daleks.

Doctor Who, produced for 26 seasons by the BBC between 1963 and 1989 and then revived again in 2005, is the longest running genre tv series ever made. (The Penguin Television Companion (2001) voted it the most influential tv series of all time). The series was originally begun as a vehicle to illustrate history lessons for children but only a few episodes were ever made in this vein. The first episode An Unearthly Child (1963) was a routine piece about The Doctor and companions visiting a prehistoric tribe but it was the second story, Terry Nation’s six-parter The Daleks (1963), that forever changed the nature of the series. Audiences reacted in alarm to the frightening mechanical pepperpot creations of The Daleks, with reports of children being so scared they hid under sofas. Dalek-mania swept England for a time and The Daleks became the series’ most popular enemies. In a short space of time, Doctor Who abandoned its illustrated history lessons concept and underwent an evolution into a cross-temporal space opera. During the series run, the Daleks were joined by a number of memorable other alien threats, including The Cybermen, The Autons, The Sontarans, The Silurians, The Yeti, the Axons and the Daemons, to name but a few.

Of course, what contributed to Doctor Who‘s longevity was its versatility. When the original actor playing The Doctor, William Hartnell, became too ill to play the part in 1966, the producers came up with a novel concept of having The Doctor regenerate bodies whenever he was fatally injured, a convenient piece of sleight of hand that allowed Hartnell to be replaced by another actor. Hartnell’s original creation was a kindly, sometimes cranky, wise grandatherly type, but subsequent characterisations became more youthful and the emphasis was placed on eccentricity. Eleven actors have played the part during the series run – William Hartnell (1963-6), Patrick Troughton (1966-9), Jon Pertwee (1970-4), Tom Baker (1974-80), Peter Davison (1981-4), Colin Baker (1984-6), Sylvester McCoy (1987-9), Paul McGann (1996), Christopher Eccleston (2005), David Tennant (2006-10), Matt Smith (2010-4), Peter Capaldi (2014-7) and Jodie Whitaker (2018– ).

The classic series was at its height of popularity during Tom Baker’s run, with Baker crafting the perpetually remembered character of the jolly Doctor in felt hat, sonic screwdriver, bag of jellybabies and of course the long multi-coloured scarf. The series was at its creative height during the Jon Pertwee-Tom Baker eras, crafting some fine and original science-fiction stories and unique alien menaces. The Doctor was always a crusader of avant garde science, a genius of unfathomable abilities who could always produce a super-scientific solution out of his hat at the last moment while leaving stuffy bureaucratic types red-faced. It was a series whose attitude of eccentricity and sheer good-natured fun often went an enormous way toward papering over production values and special effects that were often on the level of an Edward D. Wood Jr film.

During the Peter Davison era, the series was at its most conceptually ingenious and characterisations at their most intriguingly shaded. However, after that point, and generally coincident with John Nathan-Turner’s succession of the role of producer, the series slipped into self-parody – most notably Colin Baker’s buffoonish essayal of the role of The Doctor, and the increasing slippage of the stories into narrative incoherence from about 1984 onward.

The series was briefly revived in a so-so tv movie, Doctor Who (1996) starring Paul McGann as The Doctor, a misguided attempt to sell the series to American audiences. Nevertheless for a substantial time Doctor Who was one of the great science-fiction tv series – and certainly the only one that has ever rivaled Star Trek (1966-9) in terms of fan popularity. The series was later revived/reinvented with great success in 2005, resulting in briefer stories, a frequently much more adult flirtatiousness and some extremely clever storytelling/reconceptualisation that turned the revival into a major international hit.

During the height of 1960s Dalek mania, Milton Subotsky and Max J. Rosenberg, the producers who founded Amicus, one of the more successful studios that sought to exploit the 1960s boom in English horror that had been started by Hammer, purchased the rights and made two cinematically released Doctor Who/Dalek films, of which Dr Who and the Daleks was the first. (The two films are interestingly the only point that the character of The Doctor was ever actually referred to as Doctor Who rather than just The Doctor). 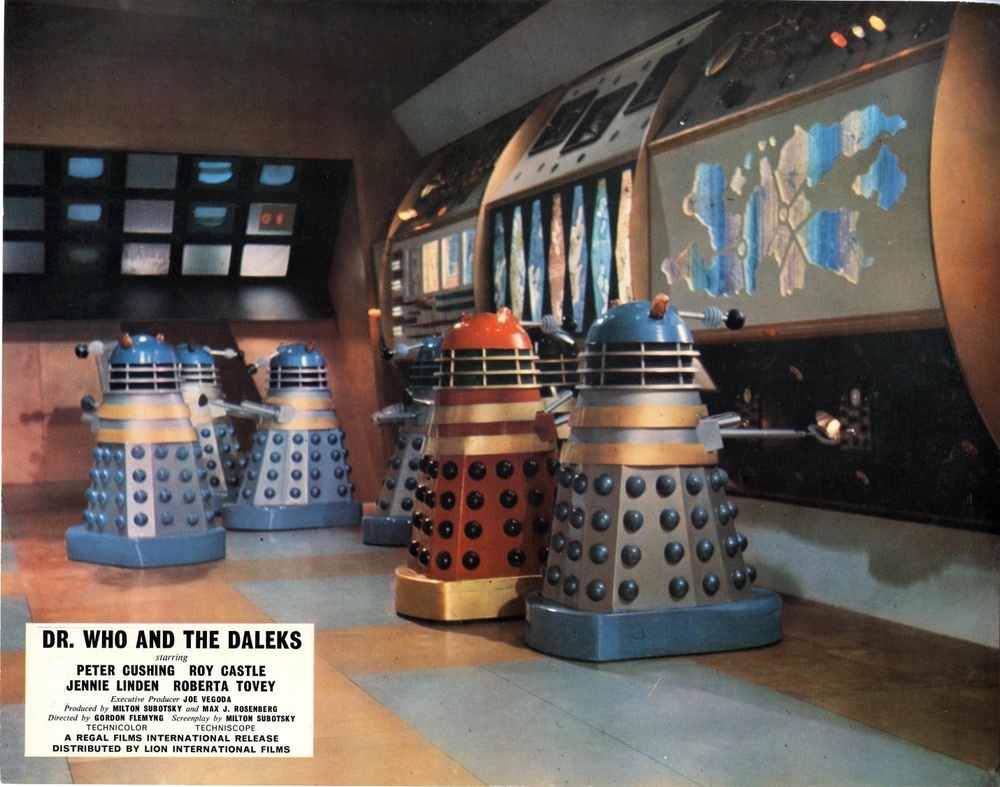 Unfortunately, while the series took itself seriously, even when being eccentric, Dr Who and the Daleks plays it as a children’s film. The film for the most part follows Terry Nation’s The Daleks script closely. The Daleks was well-thought out, where Nation made some interesting points about the problem of maintaining an ideal of pacifism even in the face of one’s own extinction. Unfortunately, the film reduces it all to asinine buffoonery, one where the pacifism is cynically dismissed as a ridiculous ideal.

The film certainly gives the series one of the things it never had until 1970 – colour – and a considerably more substantial budget. Some money has been spent on the city sets, although these never seem particularly practical, especially the entrance doors which have the most absurdly ungainly means of egress. The replacement of The Daleks’ rayguns with a deadly gas, which more often than not is turned around and used to destroy them, seems impractical to the point of being laughable.

Much worse, the film reduces the series to the garish juvenile cartoonishness of an Irwin Allen tv show – it feels more like an episode of Lost in Space (1965-8) than it does of Doctor Who. Roy Castle, better known as a tap-dancer and trumpet player, who had just made his acting debut in Subotsky and Rosenberg’s Dr Terror’s House of Horrors (1965), is cast as a comic foil. The cloddish, bumbling pratfoolery of his performance is so appallingly idiotic it defies description. Even a reliable performer like Peter Cushing seems subdued by Castle’s witlessness and The Doctor is sidelined to a supporting character for most of the running time. The only sign of life in the entire film comes from spry young Roberta Tovey, who alas fairly much vanished into obscurity and the occasional tv guest appearance after these Daleks films.

Director Gordon Flemyng (the father of actor Jason Flemyng incidentally), producers Milton Subotsky and Max J. Rosenberg, Peter Cushing and Roberta Tovey returned for a sequel Daleks’ Invasion Earth 2150 A.D. (1966). There was originally planned a third Dalek film based on the episode The Chase (1965) but poor box-office returns for Daleks’ Invasion put said to this.