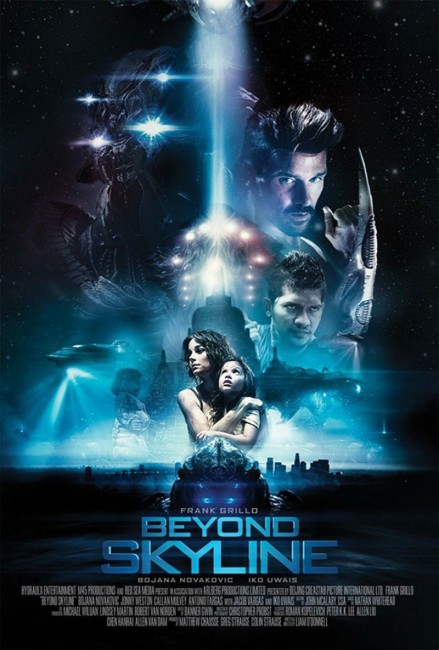 Mark, a detective on the LAPD, intervenes with his colleagues to get his son Trent released from custody after he has been apprehended. They take the subway home just as the power goes out. They and several other passengers emerge up the platform to see a blue light coming out of the sky, which causes those who look into it to be snatched up into ships hovering overhead. Trent is taken up and Mark follows to rescue him but is unable to prevent the aliens from removing Trent’s brain and placing it into a cyborg body. He also meets Elaine, a pregnant prisoner aboard who has been forced to deliver a child at an accelerated rate. Due to their interference, the ship crashes in rural Indonesia where they take refuge from the aliens with drug lords who maintain a base beneath an ancient temple.

Skyline (2010) was an alien invasion film directed by brothers Colin and Greg Strause, better known as visual effects artists and founders of the [Hy*drau*lx] effects company. They funded the film themselves; it didn’t get many good notices but did earn a modest $21 million in theatrical release.

A Skyline sequel was announced almost immediately after the original came out but seemed to float about in limbo for many years. Beyond Skyline eventually premiered at Toronto After Dark, played some other fantastic film festivals and was then released directly to video on demand in the US. This time the Strause Brothers have dropped back to a role producing and supervising the visual effects while the directing/writing duties have been inherited by Liam O’Donnell, a former [Hy*drau*lx] employee who co-wrote and co-produced the first Skyline.

Skyline ended with an unresolved plot where it almost seemed mandatory that there be a sequel to explain things. Some of Beyond Skyline retreads aspects of the first film – we see the arrival of the aliens and people being snatched up by the blue lights and the nuke dropped on L.A. through the eyes of other characters – before heading off in its own direction. The ending of the first film is expanded out and we get more scenes of the human brains being transplanted into hulking robot bodies. We also get an appearance from Samantha Jean who is supposed to be the character played by Scottie Thompson in Skyline as she delivers a baby, before dying and we see the child grow up into a not-entirely-human character who is captaining the fleet to lead the attack against the aliens by the end of the show. In either film, we never get to see the nature of the aliens themselves.

I thought Skyline was watchable, even though most audiences disliked it. However, I hated Beyond Skyline. It seems as though all the difference comes in the change of directorial hands. The Strause Brothers were seasoned visual effects pros and Skyline reflected that with some accomplished effects. Liam O’Donnell, who is making his directorial debut here, seems to have less of that assurance. The effects, even though they are provided by [Hy*drau*lx] and supervised by the Strause Brothers, seem more perfunctory and with lesser budget afforded to them.

The other thing that Liam O’Donnell places a focus on is the action element. What seemed rather ridiculous to me was that every scene where the human go up against the cyborgs seems to involve shooting at them with handguns, which surely seems about as effective as trying to stop a tank with a slingshot. However, this also becomes an alien invasion film where the focus is less on the nature of the aliens and even trying to communicate with them than every encounter takes place solely in terms of shootouts, explosions, fights and stuntwork.

The sequel also goes to Indonesia to shoot in the latter half. There is no real reason for this and the plot is distorted out of shape in order to include this interlude – you get the impression that Liam O’Donnell was a fan of The Raid films and became obsessed with replicating them to the extent of including two of the actors from the series (Iko Uwais and Yayan Ruihan). Indeed, the moment the ship crashes in the Indonesian paddy fields, it is almost as though the aliens are forgotten and O’Donnell has to sidetrack off into Frank Grillo and Iko Uwais having a long extended fight, along with the two girls facing off against one another in the background.