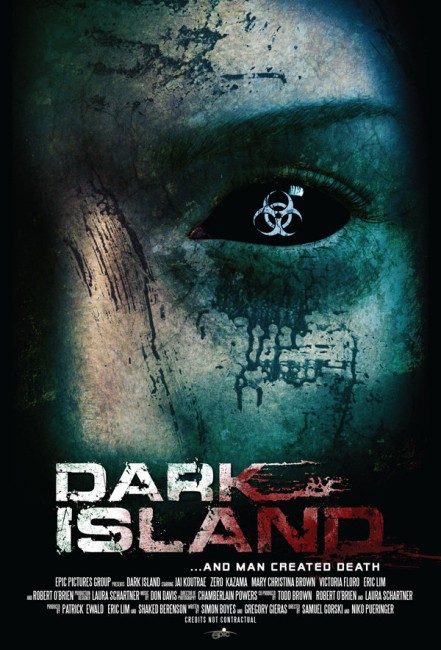 The Altracorp Corporation gathers a group of scientists and a military protection team in Saltwater, British Columbia. They learn that they are to head across to Mare Island to investigate the disappearance of a team of scientists there. Once on the island, they encounter one of the members of the missing expedition acting crazily. He then turns into a cloud of black smoke that pursues them. Team leader Raymond Hua explains that he has not been truthful about the reasons for coming there – he is a former Altracorp employee whose research was appropriated by the company for illicit biowarfare experiments. These have created a toxin that has gone amok on the island and poisons everything that it touches. Within the group are also traitors sent by Altracorp to prevent their attempts to find an antidote to the black smoke.

It is usually a bad thing with a low-budget film when there is nobody on the cast list that you have ever heard of before, clearly the sign that the budget failed to stretch to bringing in some struggling hasbeen celebrity or washed-up former tv star even for one day’s worth of shooting. It is even less of a good sign when all the names on the production credits are unknowns too. Directors Sam Gorski and Niko Pueringer are only listed as having made short films before. One has heard of the screenwriters – Gregory Gieras had directed minor genre efforts like The Whispering (1995), Little Insects (2000), Dark Asylum (2001) and Centipede (2004), as well as written the scripts for Beeper (2002), Beyond (2012), Big Ass Spider! (2013) and Day of Reckoning (2016), while Simon Boyes had co-directed the fine Broken (2006) with Adam Mason and co-written most of Mason’s subsequent films.

Dark Island was a film that one took a random punt on because they couldn’t find what they were looking for. The result feels exactly like one of The Asylum’s mockbusters – films usually with soundalike titles designed to ride the coattails of the anticipated success of popular big-budget releases. In this case, Dark Island feels like an Asylum mockbuster designed to copy the success of tv’s Lost (2004-10). Take the premise – a group of people are stranded on an island where mysterious things are happening, including their having to deal with a malevolent monster made of black smoke that lurks through the foliage trying to kill them. There is even a line of poles erected that are capable of holding it in (although, we are never given any explanation of the significance of the dead crows). Elsewhere, we learn that the island was used for illicit scientific experiments. Just like Lost, the action is also interspersed with flashbacks that tell the stories of each of the people stranded on the island leading up to how they came to be there.

The main problem with Dark Island is the plot. To its credit, the film’s explanation for the black smoke – a military biowarfare experiment gone amok and turning everything organic that it touches poisonous – is a far more credible one than the explanation eventually coughed up by Lost – that the black smoke is the evil brother of an immortal god-like man who was thrown into the cave that protects the world’s heart and that that this has caused him for no clear reason to be able to flip back and forward between human form and black smoke. The main problem I had with the black smoke here is that for a cloud of toxic gas it seems to acts with a good deal of purpose and sentience in terms of hunting people, not something that clouds of fumes are known to do. It should have been relatively easy for the writers to have devised some explanation for this.

More importantly, the film’s plot involving the party fleeing from the cloud of black smoke and the fight for an antidote is simply not interesting enough, nor directed with enough tension. The plot has also been designed to keep throwing in twists – that the group are not there for the intention they initially announced, of traitors in the midst, the deliberate infection of the survivor at the end – but these become increasingly more preposterous in the story’s need to keep compounding things. At the end, one realises these constant twists have gotten to the point where every single member of the expedition, with the exception of Jai Koutrae who is merely meant to be the boat captain, have all been pretending to be someone other than who they initially said they are, whereupon the scenario collapses into absurdity.

For a no-budget effort, the unknown cast at least play with a reasonable level of competence. They take their roles seriously, invest a modest amount in them and certainly don’t come across as stock. The sole exception to this is Marc Rita’s absurdly over-the-top performance as a US general, which feels badly like someone’s ill-informed idea of a bawling stars’n’striper general should be.