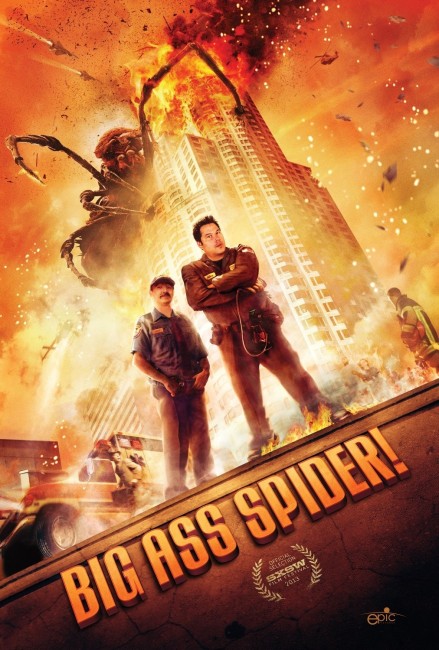 It is bug exterminator Alex Mathis’s day off. After a call-out to a client’s house, he is bitten by a spider and has to go to the hospital. While he is there, the morgue attendant is attacked by a large spider that emerges from a body bag. Alex makes an agreement with the hospital administrator to kill the spider in return for the negation of his bill. While he is tracking the spider through the vents and basement, the hospital is placed under an emergency quarantine by the military. They are tracking a spider that has escaped from a laboratory after consuming genetically enhanced foods. After feeding on invalid patients, the spider rapidly grows until it is the size of a large truck. Alex is pushed aside by the military but has uncanny knowledge of the spider’s behaviour and habits and is able to track it as it heads to downtown Los Angeles, growing to giant size. With the girl of his dreams, Lieutenant Karly Brandt, snatched up into a spider cocoon, Alex along with his trusty assistant, the hospital security guard Jose Ramos, heads down into the danger zone to rescue her before the military bomb the area.

Big Ass Spider! kicks in fantastically from its opening scene – a slow-motion pullback as Greg Grunberg gets up from the ground, which keeps on going back up to reveal chaos with soldiers shooting off-screen at what we then see as the titular spider perched on the side of a building, all accompanied by Storm Large doing a slow, lyrical version of The Pixies Where is My Mind? (1988). This sets Big Ass Spider! off to a highly promising start.

Clearly, Big Ass Spider! has set out to replicate the formula of the 1950s giant spider film with more than a few dashes of the modern monster movie. This it does fairly efficiently and unremarkably for the most part. There are some gory meltdowns, while the giant spider effects vary between the good and the occasionally ropey (mostly the former). The problem is that you are never sure what tone the film is aiming for. There is a constant level of humorous banter between Greg Grunberg and the hospital’s security officer Lombardo Boyar. This gives the impression that Mike Mendez is setting out to spoof the cliches of the genre or is aiming for some gonzo territory where you sit back laughing at the straight-faced absurdity of the film before you – the same sort of territory that the killer shark film has ended up in recent years with the likes of Jersey Shore Shark Attack (2012), Avalanche Sharks (2013), Sharknado (2013) et al.

Only this never happens. Big Ass Spider! is neither parodying genre conventions nor asking us to laugh at the absurdity of the film before us. All of the giant spider scenes are played seriously and without tongue planted in cheek, for instance. Asked to carry these scenes is Greg Grunberg, a J.J. Abrams childhood friend who has appeared in almost every film/show that Abrams has made. Grunberg comes across as an amiable and likeable enough guy but just not someone who is naturally able to walk into the action tossing off a wry one-liner or else keeping up a line in amusing repartee throughout the film. His attempts to do so here fail to come off as particularly funny and leave the film feeling that it is trying too hard to be funny. Eventually, the effort of so many lines falling flat in the delivery when they should have come with a snappy bounce starts to fray on one’s nerves.