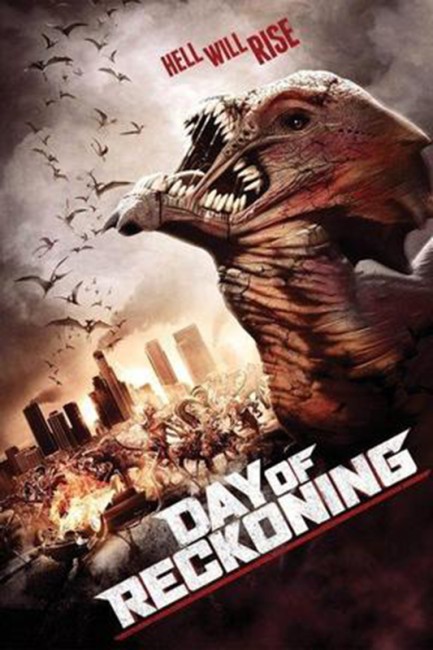 All over the world, winged creatures emerge from the ground and begin attacking humanity en masse. It is believed they are demons and this is subsequently called The Day of Reckoning. Fifteen years later and humanity lives in fear of another Day of Reckoning. It is believed this is likely to occur on the coming solar eclipse. In Los Angeles, David Shepard and his ex-wife Laura try to get their teenage son Tyler and his girlfriend Maddie to the government survival shelter as the eclipse nears. Upon arriving, they are turned away because the shelter is full. The creatures then emerge and start killing people. The only other option is for David and family is to make a perilous journey of a hundred miles to the bunker of his Uncle Ted.

Day of Reckoning was the third film from Venezuelan born Joel Novoa Schneider (usually billed only by his first two names). Novoa Schneider had earlier made Esclavo de Rios (2013) about extremist terrorism and the action film D2: Shadwell Army (2016), before taking on Day of Reckoning for the Syfy Channel. He subsequently signed on as a director on tv’s Arrow (2012-20) and made the horror film The Nanny (2017).

On one level, Day of Reckoning plays out like a regular Syfy film, in particular one of their disaster movies. It passes through all the regular plotting tropes – a world-shattering catastrophe; the journey that follows one family as they try to get through the chaos to safety; the perils encountered along the way; before the discovery of a last minute Achilles Heel in the creatures’ defence – although, as with the use of the same in Signs (2002), it defies credibility that someone would not have discovered something so common before.

On the other hand, the film is halfway watchable, which is more than you can say for most Syfy films, even if it is not outstanding. The effects and creature effects are a cut above average and quite convincing for the most part. One of the oddities of the film is that, even though the creatures are called demons and everything rendered in terms of Biblical imagery, there are no explanations for what they are and why they are returning.

Joel Novoa Schneider does a fair and solid job in maintaining tension during the scenes where the car breaks down in the L.A. storm drain outlets just where a creature is feasting and the struggle to get to another vehicle without alerting it, or in the tensions in the bunker with intruder Nick Gomez. On the minus side, the sudden and abrupt introduction of the creatures’ weakness does far too conveniently wrap the show up.