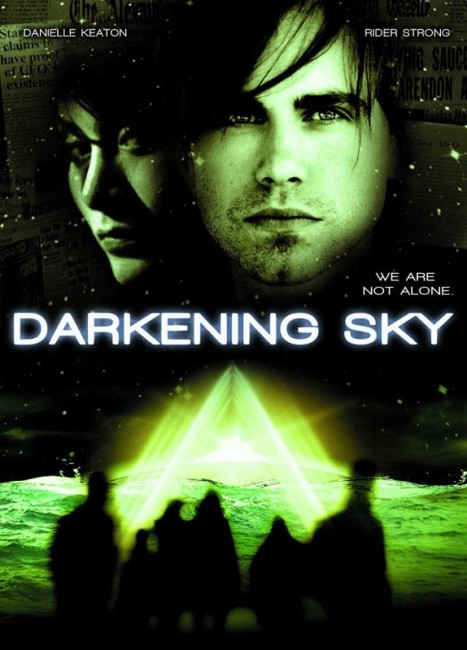 Eric Rainer has moved in with his girlfriend Lisa but they argue over the fact that Eric has abandoned completing his thesis for an obsession with finding a rational explanation for UFOs. They agree to split up. However, after troubling dreams and hearing noises that night, Eric wakes up to find that Lisa has disappeared. In asking around, he meets Beth, the niece of his neighbour Harold. He finds Beth initially intrusive but she explains that she has come to town to make a documentary about the rash of UFO sightings in the area. Her boyfriend has been abducted and she is certain that Lisa was too. She persuades the sceptical Eric to join her in investigating. As they become involved with one another, they realise that reptoid alien shapechangers may be all around them.

Darkening Sky was a directorial debut for Victor Bornia who had previously worked in visual effects on assorted films and tv shows.

This sets out with the idea of having its cake and eating it too by having a protagonist who ridicules the crank elements of the UFO phenomenon and is engaged in an anthropological study of it at the same time as he is drawn in to regarding the phenomena as real. The film soon becomes one where the protagonist is propelled through a series of mysterious happenings. In these scenes, Victor Bornia evinces a certain sense of paranoia and rubber reality. And yet for all that, Darkening Sky is not that interesting dramatically. Most of it is rehashing elements that are familiar from the abovelisted works and others.

On the other hand, towards the end where the film started to pick up and hold one’s attention. [PLOT SPOILERS] This was around the time where we see start to wonder if all the shapechanged aliens that Rider Strong has killed are real or whether it is all in his head. There is a rather interesting point where the film pulls back in a big M. Night Shyamalan-esque conceptual reversal twist to suggest that Rider Strong is just a mental patient, that Danielle Keaton is an imaginary figure in his head and that he has been killing everyday people all along. The final scene of the film however leaves us in a state of ambiguity between whether this is real or is something created by the aliens to discredit Rider.