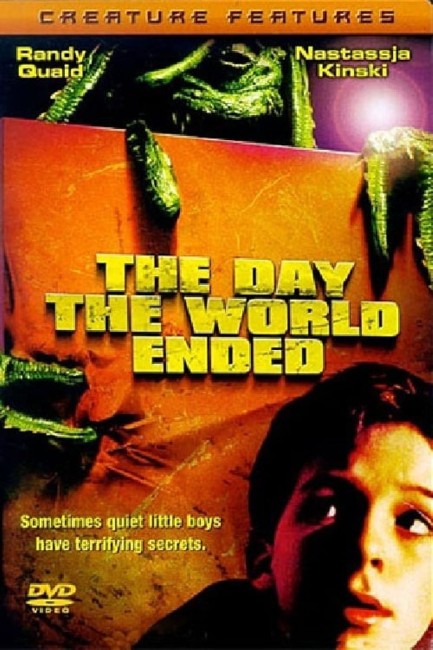 Jennifer Stillman takes up a job as a school therapist in the small Nevada town of Sierra Vista. She is drawn to helping vulnerable young Ben McCann who seems to have the ability to move things by the power of his mind. At the same time, a monster starts killing people in the town. All the victims appear to in some way be related to the mysterious disappearance of Ben’s mother. As Jennifer tries to help Ben and fend off local prejudices, Ben keeps insisting that the monster is his real father and has returned from space for him.

The Day the World Ended was one of a host of old AIP B-movies that were remade as cable tv movies in 2001 under the umbrella table Creature Features and produced by former AIP head Samuel Z. Arkoff’s son Lou, monster maker Stan Winston and actress Colleen Camp. Others in the series included Earth vs. the Spider (2001), How to Make a Monster (2001), She Creature (2001) and Teenage Caveman (2001).

The original Day the World Ended (1955) was one of the earliest directorial films from Roger Corman, a cheapie about a group of survivors huddled in a valley immediately after a nuclear holocaust and facing off mutants. As with the other Creature Feaures films, this Day the World Ended throws off any resemblance to the original. (Although this is the only one of the Creature Features that even remotely has any connection to its namesake – with a video copy of the original being briefly seen in the background). In the new plot, the title is somewhat of a cheat – though an alien monster is loose in a small nowhere town, this falls a long way short from upholding the titular suggestion of the end of the world.

The Day the World Ended 2001 is also the dullest of the Creature Features. Director Terence Gross, who had previously made the amusingly eccentric Hotel Splendide (2000) but has made nothing since this, enervates none of the film, nor creates any atmosphere. There is one cool effect from the Winston effects people where we see Debra Christofferson’s face ripped off.

There is also an effective ending that leaves us in a state of ambiguity as to whether the monster is real or not. As such, The Day the World Ended 2001 would have made for an okay episode of the original Outer Limits (1963-5) but aside from the sting in the tale it is otherwise eminently forgettable.