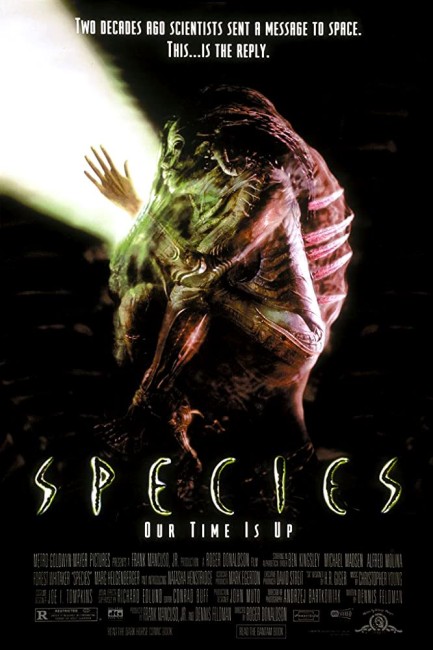 At a laboratory in Dugway, Utah, Dr Xavier Fitch oversees the killing of a young girl using cyanide gas. Instead, she breaks out of confinement with a display of superhuman strength and escapes aboard a passenger train bound for Los Angeles. Fitch calls in a team comprised of molecular biologist Dr Laura Baker, anthropologist Stephen Arden, psychic Dan Smithson and freelance government troubleshooter Captain Preston Farley. He explains to them how SETI received messages from space containing DNA code, which they implanted into a human female embryo. The embryo developed at a remarkable rate, growing into the child creature Sil, before making its escape. By the time she reaches Los Angeles, Sil grows into womanhood. Fitch and his team must track her down and stop her as she tries to find a suitable human male to breed with, all the while killing those that do not meet her genetic requirements.

Just when most ripoffs of Alien (1979) had been relegated to the B-budget direct-to-video releases, along came this big-budget version. In fact, short of actual Alien sequels, Species was the biggest budgeted of all the Alien ripoffs up to that point. Its’ success briefly heralded a small fad of big-budget Alien copies, which included the likes of Mimic (1997), The Relic (1997), Deep Rising (1998), Virus (1999) and Supernova (2000).

Species has certainly been promisingly put together. It is slickly directed by New Zealand expat Roger Donaldson. Donaldson started in the science-fiction genre with his and Sam Neill’s debut feature, the New Zealand Dystopian film Sleeping Dogs (1977) and then made the great Smash Palace (1981), which provided Donaldson with a ticket to the US mainstream where he has since maintained a steady output, with some quite good entries – No Way Out (1987) and The Getaway (1994) – but mostly blandly middle-of-the-road material like Cocktail (1988), White Sands (1992), Dante’s Peak (1997), Thirteen Days (2000), The World’s Fastest Indian (2005), The Bank Job (2008), Seeking Justice (2011) and The November Man (2014).

Species also marshals an impressive name cast, even if most of these are only filling slim, generic roles – one even gets to see distinguished British character actor Ben Kingsley (Gandhi himself!) running about with an assault rifle. The film brings back H.R. Giger, the cult Swiss artist of the perverse and creator of the original Alien alien, to design the Sil creature.

Despite all of this, Species is disappointingly derivative. The monster is no different from any B-budget slime-drooling Alien-ripoff and the film’s one original twist, that the alien is the genetic code for a woman picked up by a radio telescope, is an idea that was first done in the British tv serial A for Andromeda (1961). The film starts well, beginning at a point – the attempt by Ben Kingsley to kill a young girl with cyanide gas and her subsequent breakout – that immediately captures one’s interest. However, the opening SETI angle, despite scriptwriter/producer Dennis Feldman’s claims, is of no further importance to the story than as a convenient hook to hang the film on.

The scripting proves amazingly clumsy at times. Sil’s lack of worldliness appears to be picked up or dropped whenever the plot seems to require it – one minute she has perfect fashion sense, the next is unable to work out the purpose of a bra; she figures out how to drive a car in next to no time and engages in high-speed chases with all the skill of a stunt driver, yet has no idea that a gas tank needs to be refilled.

Even clumsier is the film’s subtext. In the Alien films and most of their imitators, the omni-sexual alien monster stands in for some form of malignant sexuality, usually – as in Aliens (1986) – of a malignant brood mother. One suspects that Sil was made a human shapechanger for the sole reason of allowing the film some sex scenes as well. Thus the metaphor of malignant reproductive cycles is neatly tied to the metaphor of deadly sex that preoccupied Hollywood at the time in films like Fatal Attraction (1987), Basic Instinct (1992) and their numerous imitators. In many ways, Species could be described as “Basic Instinct with tentacles” – Natasha Henstridge’s Sil is no more than a conceptual fusion of H.R. Giger’s alien and Sharon Stone’s sexual predator from Basic Instinct. The metaphor of 1990s sexual dangers swings clumsily beneath the film – connections are made between casual pickups in nightclubs and a creature that can kill for sex, and naturally the decadence that L.A. is seen as representing proves the perfect hunting ground for such a creature.

The best among the cast is Michael Madsen who, since Reservoir Dogs (1992), is an actor that has always been worth looking out for, even if he has failed to make the major breakthrough he seemed eminently capable of doing. Through his wry-humoured, likable playing, Michael Madsen turns Foster into the most sympathetic and well developed of the characters in the film. Ben Kingsley is typically good but the role is underdeveloped – Kingsley plays it with too many ambiguities, one never finds out where he is coming from. Elsewhere, a pre-CSI: Crime Scene Investigation (2000-15) Marg Helgenberger is pallid and Forest Whitaker astonishingly neurotic, although Alfred Molina comes across with a certain wry sense of humour.

In her screen debut, fashion model Natasha Henstridge demonstrates little in the way of anything other than the ability to look good undressed, although she subsequently took acting lessons and has proven reasonable in some parts, most notably in John Carpenter’s Ghosts of Mars (2001). The surprise name in the cast, playing the young Sil, is a fifteen year-old Michelle Williams, later to be an award-winning and nominated actress with roles in works like Brokeback Mountain (2005), Manchester By the Sea (2016) and tv’s Fosse/Verdon (2019) to her name.

screenwriter Dennis Feldman also turned in the scripts for as well as produced Just One of the Guys (1985) and The Golden Child (1986) and wrote only the script for Virus (1999) and acted as a producer on Kenneth Branagh’s reincarnation thriller Dead Again (1991). Feldman’s one and only directorial outing was the really oddball spy film Real Men (1987).

(Winner for Best Makeup Effects at this site’s Best of 1995 Awards).