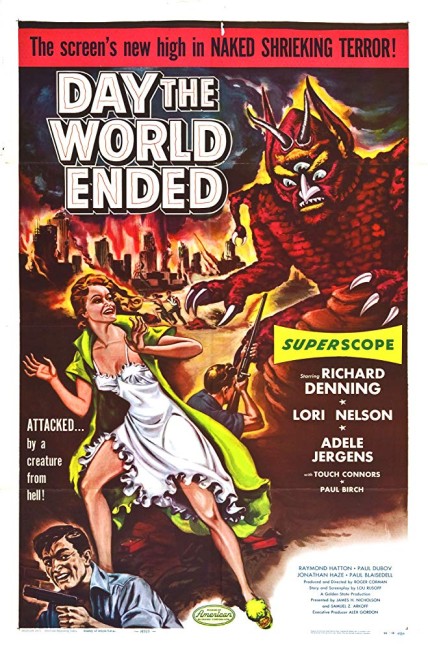 The world has been devastated by nuclear war. In a valley that is protected by mountains lined with lead ore, former Navy captain Jim Maddison has prepared for this eventuality and survived, along with his daughter Louise and her boyfriend Rick. They are interrupted by the arrival of the Italian hood Tony Lamont and his girlfriend, the stripper Ruby, as well as the aging prospector Pete. Jim is unwilling to admit the others because they have limited supplies but Louise insists. Soon after, tensions begin to emerge in the house as Rick is drawn to Ruby and Tony makes moves on Louise. Meanwhile, they are menaced by a human survivor who has been transformed into a mutant with an armoured shell that is impervious to bullets.

Day the World Ended was one of the first films ever made by Roger Corman, the legendary director-producer who earned the nickname ‘The King of the Bs’ for his purported ability to make films on next-to-no budgets, often shooting them in about a week or less. (Day the World Ended was shot in rumoured nine days). In the 1950s, Corman made a number of often enterprising B science-fiction and horror movies, including the likes of It Conquered the World (1956), Not Of This Earth (1957), Attack of the Crab Monsters (1957), A Bucket of Blood (1959) and most famously The Little Shop of Horrors (1960).

Day the World Ended was Roger Corman’s fourth film as director and his first ever venture into sf/horror filmmaking (excepting for Monster from the Ocean Floor (1954), which he had produced a year earlier). Corman would later gain critical respectability with his series of Edgar Allan Poe adaptations beginning with The House of Usher (1960). Corman retired from directing in 1970 and has since become a prolific low-budget producer at studios such as New World Pictures, Concorde and New Horizons with over 400 films to his credit as producer.

Day the World Ended blatantly steals the basic set-up from Arch Oboler’s Five (1951), the very first film to deal with the nuclear holocaust and its aftermath. Five was a solemn and portentous affair concerning the tensions between five survivors of the nuclear holocaust gathered together in a house. Day the World Ended, although no less solemn and portentous in its own way, cheerfully subverts the plot to its own lurid pulp exploitation ends – by sole dint of adding a three-eyed rubber monster to the proceedings. In so doing – by transforming Oboler’s serious message-heavy work into the language of pulp – Roger Corman unwittingly set the course for the post-holocaust B-movie for the rest of the decade, most of which drew from the cliches established here.

Day the World Ended is made on a painfully low budget. The photography and lighting is crude and Corman’s camera set-ups are virtually static. The film almost takes place like a stage play in a single setting – in the opening scene, the characters even make their entrance on cue one after the other like actors in a drawing room drama. It is a cheap and shoddy film. It is however conducted with an undeniable vigour and a conviction in itself. Paul Birch gives a fine hard-edged performance as the captain, and one does not doubt for a moment that everybody involved believed the pronouncements about the future that the film makes.

The film’s underlying sentiments are rather funny today. Who gets killed off and in what order is predictable – the cranky prospector, followed by the hood, the cheap tramp and then the aging father – leaving only the clean-cut hero and the blonde girl-next-door type to head off hand in hand and repopulate the future with, by implication, Caucasian babies and WASP values. Everything is seen in terms of Biblical provenance and passover and the ending with the hero and heroine walking off together is naturally seen with allusions to the Garden of Eden. The script trots out lines like “There is a force more powerful than Man and in His infinite wisdom He has spared a few.”

Day the World Ended is one 1950s film that has never been remade in the modern era, although there was Z-movie director Larry Buchanan’s cheap In the Year 2889 (1966). There was also The Day the World Ended (2001), a film produced for cable in the Creature Features series. However, the Creature Feature series only borrowed a stack of 1950s AIP B movie titles and this was an otherwise entirely unrelated film about a town terrorised by an alien monster. The title was also used for an Irwin Allen disaster movie The Day the World Ended aka When Time Ran Out (1980), which, despite the apocalyptic promise of the title, is only a dreary disaster about a volcanic eruption and has no science-fiction elements.