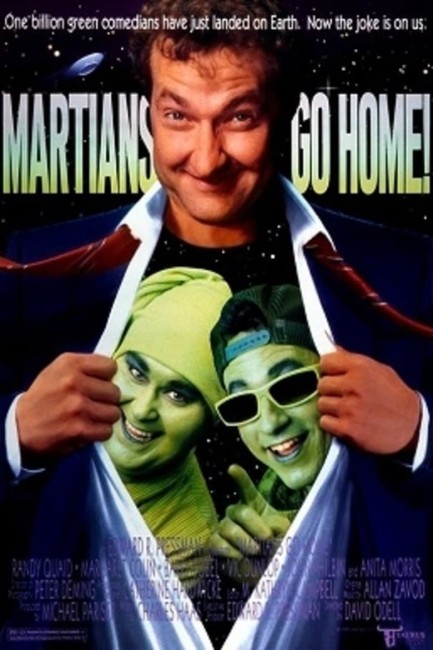 Earth is suddenly invaded by millions of extremely annoying green-skinned Martians. They perform bad stand-up routines and are able to read people’s minds and tell their embarrassing secrets. TV theme music composer Mark Devereaux is driven crazy because the Martians keep interrupting to watch as he tries to make love to his girlfriend. He then realises that the Martians have come because his music was accidentally broadcast into space and that he may hold the secret of getting rid of them.

1990 was a year that suddenly featured a spate of Martian movies with this, Spaced Invaders (1990), which originally started shooting under the title Martians!, as well as the planned adaptation of the Topps Mars Attacks gum card series, which stalled and did not get off the ground until several years later as the Tim Burton Mars Attacks! (1996). The interesting thing about all three of these films is how they maintain a view of life on Mars that clearly contradicted contemporary scientific knowledge. All three also draw upon old science-fiction as well – Mars Attacks! from the Topps gum cards, with Spaced Invaders setting itself around the 1938 Orson Welles War of the Worlds radio broadcast, and Martians Go Home being adapted from Frederic Brown’s 1955 novel.

Martians Go Home was the directorial debut of David Odell, previously a screenwriter who started work on The Muppet Show (1976-81) and then wrote the screenplay for the fine Jim Henson fantasy film The Dark Crystal (1982). Outside of work for Jim Henson, Odell has more ominously been responsible for the screenplays for flops like Supergirl (1984) and Masters of the Universe (1987). Needless to say, Martians Go Home joined these and failed to even receive a cinematic release.

It is sad what a bad film Martians Go Home is. You can sort of tell from the first few minutes when Martians arrive with green greasepaint on their faces and wearing Hawaiian shirts and leis. Frederic Brown was a writer with a gonzo imagination and needless to say neither Odell, nor screenwriter Charlie Haas, who was also responsible for Gremlins 2: The New Batch (1990) the same year, have the same sort of humour.

In the book, Jim Belushi’s character was a science-fiction writer who conjures up the Martians from his imagination – the book ends with him rather amusingly just wishing them out of existence. The film changes the character to a musician who manages to broadcast some magic melody that for no particularly clear reason draws them to Earth and where he manages to dispatch them in an ill-conceived plot flourish by simply rebroadcasting the signal.

Outside of that, a film about Martians who have bad clothing sense and are like extremely annoying stand-up comics is an idea that is as unpromising as it sounds. Odell directs with a good deal of frenetic cartoonish silliness and you can almost see the film falling flat on its face. David Odell has remained unemployed since Martians Go Home.