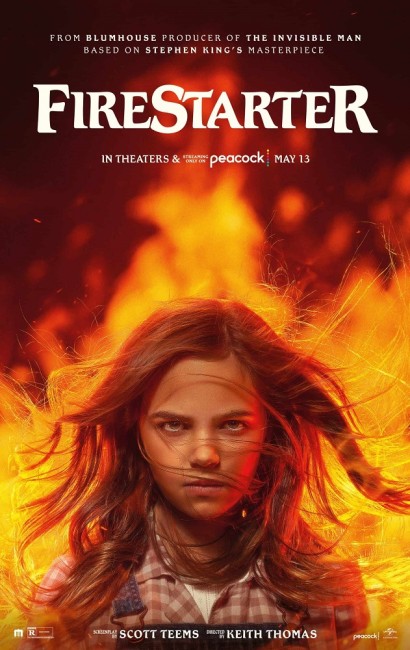 Several years earlier, Andy and Vicky McGee were volunteers in the Lot 6 drug experiments. This left them with psychic abilities – Andy has The Push where he can influence minds, while Vicky has psychokinetic abilities. They have given birth to a daughter Charlie who has pyrokinesis – the ability to start fires with her mind. With Charlie now eleven years old, they live off the grid to avoid detection by government agencies. Andy has insisted that Charlie try to suppress her ability but after a bullying incident in class, she causes a fireball to erupt in the school bathroom. During an argument back home, she also burns Vicky’s hands. Charlie’s panicked 911 call brings them to the attention of the government agency headed by Captain ‘Cap’ Hollister. Hollister dispatches the Native American assassin Rainbird to head the efforts to bring Charlie in. After Rainbird kills Vicky, Andy and Charlie go on the run pursued.

Firestarter (1980) was the sixth novel published by Stephen King. I haven’t read the book for many years but I remember it as a highly enjoyable read back at the time. It was King venturing into the frequent theme of individuals with Psychic Powers and doing an excellent job of delineating the characters and father-daughter relationship – if anything, it was King venturing into the child-friendly territory that Steven Spielberg’s films of the era captured so well.

The book duly underwent a film adaptation as Firestarter (1984) from Dino de Laurentiis and director Mark L. Lester. This was an okay and generally faithful adaptation where the standout aspect was a nine year-old Drew Barrymore giving a superlative performance as Charlie, along with George C. Scott as Rainbird, David Keith as Andy, Martin Sheen as Cap Hollister and Heather Locklear as Vicky. (Incidentally, this version of Firestarter was originally to have been directed by John Carpenter who left the project but subsequently went on to make another King adaptation with Christine (1983). Carpenter has now developed a career as a musician, in particular delivering the score the Blumhouse’s Halloween revivals and, along with his son Cody, returns to compose this film’s score). There was also a sequel with Firestarter Rekindled (2002), a desultory mini-series that showed Charlie in her twenties played by Marguerite Moreau and featured a return of Rainbird now played by Malcolm McDowell.

The remake has been placed in the hands of Keith Thomas who made a very impressive directorial debut with The Vigil (2019), an extraordinarily haunted film set amongst New York’s Hasidic Jewish community. The script comes from Scott Teems who had previously directed the non-genre The Quarry (2020), while also performing script duties on Blumhouse’s Halloween Kills (2021) and their upcoming reworking of The Exorcist (2023).

My anticipation for the new Firestarter began to sink through the floor when the opening credits announced that it was a co-production from Blumhouse and Weed Road Pictures, the production house of screenwriter Akiva Goldsman. Since 2010, Blumhouse have had great success with their horror films including the likes of Insidious (2010), The Purge (2013), Ouija (2014), Happy Death Day (2017), all of which they have spun off as sequels. The downside is that Blumhouse prefer to make their films on budgets of under $5 million – Firestarter was given a budget of $12 million, which is still low as most Hollywood productions go.

The dismal prospect on the credits is the name of screenwriter/producer Akiva Goldsman who has laid a swathe of atrocities across genre material with his script adaptations of Batman Forever (1995), Batman & Robin (1997), Practical Magic (1998), I, Robot (2004), I Am Legend (2007), Angels & Demons (2009), Insurgent (2015), The Dark Tower (2017) and Rings (2017), as well as his having produced Jonah Hex (2010) and several films, Deep Blue Sea (1999) and Mindhunters (2004), for the perpetually dreadful Renny Harlin, the tv mini-series adaptation of Arthur C. Clarke’s Childhood’s End (2015) and Guy Ritchie’s King Arthur: Legend of the Sword (2017). The prospect for Firestarter is never more evident in looking to Goldsman’s previous brush with King – his script for The Dark Tower, which reduced King’s epic saga to something that had almost nothing to do with the original beyond character names, although to be fair Goldsman fared slightly better as producer of Mike Flanagan’s adaptation of Doctor Sleep.

I at least held my hopes out for Firestarter on the basis of Keith Thomas. The film starts in in reasonable ways. The scenes with Zac Efron coming in to find the nursery on fire, the opening credits against video footage of the Lot 6 experiments, Zac’s admonitions for Charlie to suppress her powers and we seeing a school bathroom cubicle erupt in a fireball all seem to be keeping good faith to the book. These come with some amusing modern interpolations –the McGees living off the grid without access to internet, cell or wifi to avoid detection by government agencies and Andy working for cash. Although part of me kept wondering about the wisdom of them living in the open under their own names – wouldn’t school registration place them on the government radar?

On the other hand, your hopes for the film soon start to sink. Keith Thomas opts for photography that is singularly drab, rendering the whole film an uninspired grey – at the very least, this is a film that cries out for the flames to be seen in bright oranges and yellows. Certainly, the film’s pyrotechnics are technically better than the 1984 film, although are surprisingly sparing in their usage. The casting is singularly uninspired. Former teen heartthrob Zac Efron of High School Musical (2006) fame makes for an okay Andy. The best that can be said about Ryan Kiera Armstrong is that she is serviceable in the role of Charlie but her performance is a pale shadow in comparison to Drew Barrymore in the original.

And then there is Rainbird – which I’ll discuss more about in a moment. Despite being played by an actual Native American actor Michael Greyeyes, the character has been so gutted of anything that made it work in the original that George C. Scott, a Caucasian actor cast as American Indian in the 1984 film, still gives the better performance. Martin Sheen has been replaced by Gloria Reuben for reasons that are probably everything to do with diversity casting. Sheen radiated effortless assurance – you could easily believe him as the head of The Shop (or The CIA – the agency here goes unnamed for no particular reason). I really like Gloria Reuben as an actress but she is not a good fit here at all. Where she should seem in command and the head of an agency, she seems more like a social worker pleading with people for help. Consequently, when she is required to show her teeth as a villain at the climax, she lacks any effect.

And that brings me to the disastrous changes that have been forced onto the book’s plot. These frequently make no sense at all – now Charlie gains an ability to read minds and telekinetically throw things around. Another ridiculous change is the Manders – the couple of farmers with whom Andy and Charlie seek refuge during their flight. In the book and 1984 film, the Manders’ were simply a retirement age couple who came with a homespun decency. Here for no real reason Irv Manders is made an alcoholic and his wife is a bedridden vegetable following an accident where Charlie is able to pick up her thoughts.

Perhaps the most egregious change is making Rainbird into an alumni of the Lot 6 program and able to employ psychic powers as well. This leads to the most substantial change, which guts the book of its strongest sections – the elimination of the scenes where Rainbird goes undercover as a janitor and befriends Charlie in an effort to get her to cooperate with The Shop’s experiments. It removes the book and 1984 film’s emotional core and simply gives us a story about a family on the run. It turns Charlie from a manipulated innocent who stands up in a Carrie-like eruption of her powers to simply a kid who sets out determined to rescue her father. The end of the film where Charlie has burned down The Shop (or whatever it is called now) and sits on a beach before Rainbird comes and carries her away, now apparently some kind of substitute parent despite the fact that he killed her mother, seems like a bad joke on the book.