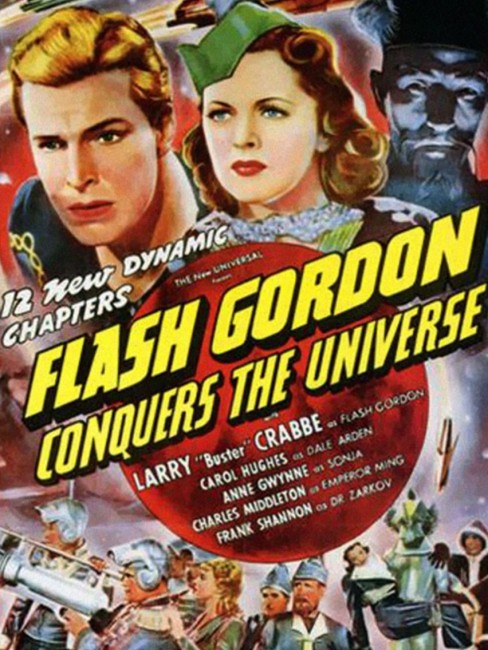 On Earth, people are suddenly being killed by the Purple Death, a mysterious and deadly infection so named because it leaves a purple spot on victims’ foreheads. Flash Gordon, Dale Arden and Dr Zarkov discover that this is being caused by a spaceship from Mongo spraying poison dust in the upper atmosphere. They immediately head to Mongo. Rejoining their old companion Prince Barin in Arboria, they journey to the frozen kingdom of Frigia to mine Polarite, the antidote to the Purple Death. They must then thwart Emperor Ming’s plans to conquer the universe and eliminate them.

Flash Gordon Conquers the Universe was the third and last of the Flash Gordon serials. It had been preceded by Flash Gordon (1936) and Flash Gordon’s Trip to Mars (1938). All three are regarded as classics – both as early works of science-fiction and as some of the best serials ever made. Of the three serials, it is generally regarded that the high level of creativity exhibited by the preceding two entries was starting to flag somewhat by this point, even so Flash Conquers the Universe still remains head and shoulders above most of the other serials that were being made around the same time.

All serials were made on appallingly threadbare budgets and exhibited a tatty impoverishment. Amidst this, the Flash Gordon serials stand with a resplendent regality far above the rest of the crowd. The sets here are highly imaginative – Ming has an imperial ballroom that would no go amiss in an historical epic and the rocketship interiors are art deco marvels. The costumes are particularly lavish – with Flash looking positively spiffy in his epauletted uniforms and Ming fabulous in at various points white tunic, plumed headdress and skull cap, along with the Arborians in their cute little Robin Hood uniforms and the Frigians in their ermine-collared fur coats.

The cliffhangers in the Flash Gordon films were in a class way above other serials. Flash Gordon Conquers the Universe manages some marvellously exciting ones – especially a scene during one of the early chapters where Flash is seen plunging down into an icy crevasse. The Frigian scenes are the best in the film, where it looks as though Universal managed to cobble together some stock footage from a mountaineering epic that allows the film to offer up some breathtaking shots of the party climbing mountains, facing avalanches, a great scene with the search party looking for Flash and Dale with flares, and a neat cliffhanger with Dale hanging off the side of a cliff during an avalanche.

The Flash Gordon serials also conjured a sense of alien exoticism that no other science-fiction serials ever found. The aforementioned Frigian scenes are the most evocative. So too are the scenes entering into the Land of the Dead – the Rock People with their seeming papier-mâché hoods and the fascinating ability to merge together and turn into a rock outcrop seem unworldly. There are also some excellent scenes during the middle of the story where Flash must traverse a burning terrain in a heat-suit in order to disarm a bomb.

The serial’s only failings of imagination are when the budget does not stretch far enough to convey the intended vision – the giant lizard that menaces people is only a scrawny lizard that has been photographically enlarged and crucially never appears in the same shots as the actors. Arboria is represented by the same exterior of what looks like an ivy-covered Beverly Hills mansion. The electrical forcefields of the bomb robots have only been scratched over the frame.

The sleek rocketships look marvellously nifty as they buzz about shooting at one another – there is a fabulously exciting sequence where Flash scales down between two rockets on a rope to save Roka – but the ambitiousness of the scene is underdone by the impoverished special effects that fail to show any exteriors of the ship in closeup or anything other than Flash kicking in the door of the rocketship as seen from inside the ship. A number of model shots for the palace, Arboria, of rockets taking off and especially the scenes of the rockets landing around a certain rocky desert outcrop are frequently repeated throughout.

The serial only sustains itself intermittently. It is at its most imaginative early on during the Frigian scenes but none of the rest of the film reaches this level. There are occasional moments such as the aforementioned journey across the burning terrain and some of the venture into the Land of the Dead. Alas, the latter two-thirds tends to slow down to lots of running around the palace and Arboria that consists of standard serial plotting and cliffhangers.

Larry ‘Buster’ Crabbe is his usual humourless, authoritative presence. Charles Middleton plays Ming again, although by this time he seems to be getting tired of the role and a note of dreariness enters his performance. Frank Shannon plays Dr Zarkov, as before, like the era’s equivalent of a mentally ill man. This time out Carol Hughes has replaced Jean Raymond in the role of Dale Arden, in so doing making Dale from a blonde into a brunette. Anne Gwynne is the amusing new addition. She is played as the nearest equivalent of a slutty, calculating strumpet that the era was allowed to get away with with scenes trying to seduce Flash and even faking her own suicide to escape from a cell.