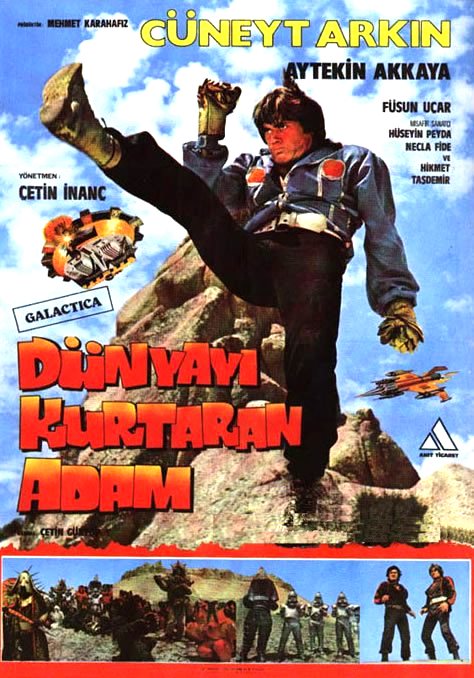 aka The Man Who Saves the World
(Dünyayi Kurtaran Adam)

It is thousands of years in the future after the Earth has been destroyed by nuclear war. The Wizard desires to obliterate what is left of The Earth but the remains are protected by a forcefield made up of the brain molecules of the dead. Trying to stop the latest onslaught, two space pilots, Murat and Ali, crash on an undiscovered planet. There they are beset by The Wizard’s soldiers and robots as he seeks a human brain to defeat the Earth’s forcefield. They become the protectors of the defenceless people of this world and discover that this is the thirteenth colony of Earth. Murat learns his destiny to obtain the sword and brain that will help him defeat The Wizard.

The direct translation of the title from Turkish is The Man Who Saves the World but everyone everywhere informally refers to the film as The Turkish Star Wars. The name has stuck and has even been used on the dvds and in promotion for the midnight theatrical screenings of the film. In every other regard, The Turkish Star Wars is a bad movie classic. In fact, I am considering revising my Worst Ever Films list to include it at or up near the top spot.

The name The Turkish Star Wars all came about because the film was made so cheaply that rather than go to the extent of creating costly visual and model effects, director Cetin Inanc simply uplifted effects footage from Star Wars (1977) and edited it into his film. The opening attack on Earth where the two pilots defend against The Wizard’s forces are mostly taken from the Death Star attack scene, although these are mangled together with other scenes of Star Destroyers and the Millennium Falcon so that it is impossible to tell which side which ships are fighting on. Various of these scenes appear elsewhere throughout whenever someone talks about The Wizard’s forces attacking Earth. We also get liberal use of the Mos Eisley cantina scenes, which are turned into a series of illusions that the hero must pass through in his quest.

Apparently stealing the plots of popular Hollywood movies (and footage from them too) is a commonplace occurrence in Turkish cinema. Bollywood is another genre that often uplifts entire plots of popular films and rewrites them to their own ends. In both of these cases, the filmmakers seem to be operating with the assumption that making the films in a different culture and language means that Hollywood studios would not bother suing for copyright infringement. Either that or the belief that their films will never be seen beyond the country of origin and so will escape notice. Certainly, this would not be the case if The Turkish Star Wars were made in English language, or if the film were released as anything more commercial than a bootleg.

The film is often called a ripoff of the plot of Star Wars, although this is not the case – more so, it falls into the fad for space opera adventures that Star Wars created. If anything, it is more like the planetary adventure of films like Metalstorm: The Destruction of Jared-Syn (1983) and Spacehunter: Adventures in the Forbidden Zone (1983). Later when the heroes learn of their destiny, the film blatantly copies the set-up of Battlestar Galactica – where there is a specific line about having found the lost ‘thirteenth tribe’. Interestingly, where for Galactica creator Glen A. Larson, the show took the idea of the pilgrimage from his Mormon religion, The Turkish Star Wars turns it towards a parable about the Islamic religion, making what is in the effect the world’s first Islamic space opera.

One of the most bizarre aspects of The Turkish Star Wars is the completely nonsensical dialogue. One has no idea if this is a direct translation from the Turkish or else has been done so with deliberate intent by the people writing the subtitles (one sneakingly suspects the latter). During the opening space dogfight, the two heroes come out with surreal lines like (in regard to the attacking ships): “Those ones coming are too sour faced. It’d be nice if some chicks with mini-skirts were coming.” Elsewhere they sit down during their trek across the planet: “I am tired like a dead. Let’s rest a while.” Ayetkin Accaya reflects on the destruction of the human race: “Humans were too serious … If they had known a little about laughing, they’d have chosen peace instead of war.” The subtitling is so incoherent that we are repeatedly told that the Earth has been destroyed and then quite contradictorily also learn that the villain’s big scheme is to destroy the Earth.

The tattiness of the action, the inanity of the dialogue, the incredibly cheap creature effects and lack of any directorial skill gone into the film makes for a painful watching experience. Just trying to make some sense out of the dialogue causes an ordinary mortal’s brain to hurt. Not to mention the blatant ridiculousness of the uplifted score.

The most amusing is a scene where Cuneyt Arkin rides in to save his friend who is engaged in a fight. Cuneyt’s scenes are scored with the main motif from Raiders of the Lost Ark, while the fight scenes taking place are scored with the familiar basso ‘dum-dum-dum-dum’ motif from Flash Gordon (albeit with the “Flash-ah-ah” refrain edited out). It becomes completely surreal during the sequence where the action cuts between the fight and the hero riding to the rescue, where the score keeps flipping between the two familiar pieces of music alternately repeated over.

A sequel was made with Son of the Man Who Saves the World (2006), informally known as Turks in Space. This comes from a different director but features a return performance from Cuneyt Arkin. Unlike the original, there are no uplifted effects sequences, and this sets out to be a comedy. This too has attained a bad movie reputation, although not as famously as its predecessor.