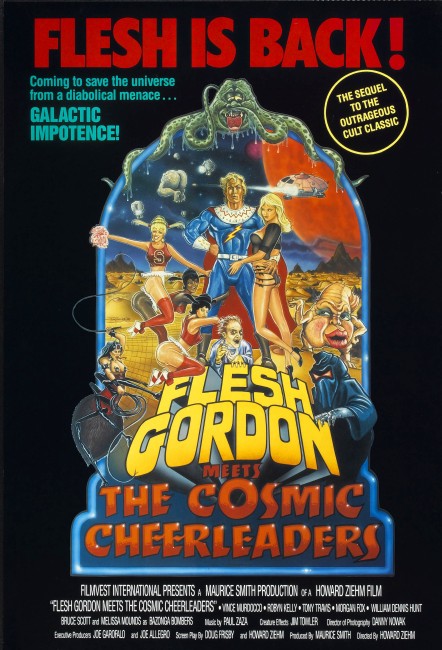 Flesh Gordon is appearing in a movie about his adventures when he is kidnapped by four cheerleaders in a spaceship and taken to a strange planet that has entered the Solar System. They are members of The Society of Cheerleaders to Rehabilitate Erections Worldwide and explain that they need Flesh’s vital sexual essence due to the fact that their planet has been affected by a plague of impotence. Dale Ardor appeals to Dr Flexi Jerkoff to rescue Flesh and they set out to the new planet aboard his Tit Ship. Once on the strange planet, Flesh is rescued but Dale is captured by the Evil Presence, the husband of Queen Frigia. Flesh and Dr Jerkoff must set out on a journey across the planet. The Evil Presence meanwhile has a plan to capture Flesh and replace his own impotent penis with Flesh’s vital one.

Flesh Gordon (1974) was one of the first genre parodies. It took the po-faced seriousness of the Flash Gordon (1936) serial and its sequels and spoofed them by bringing out the inherent sexual symbolism – there is the classic moment where the rocket is launched from the shed and emerges like a dick coming out of its zipper. Flesh Gordon has a cult status, although this is something that exists more out of its pointed spoofery of fan favourites and a surprising number of influential special effects artists who worked on than it necessarily being a great film. (It was also the first of an industry of adult films that were made as spoofs of popular mainstream releases). After nineteen years, Howard T. Ziehm, one of the three credited co-directors of the original, returned to make this sequel. The only other returnee is William Hunt in the role of Emperor Whang (hidden behind a mask for most of the film and referred to as The Evil Presence). Flesh Gordon Meets the Cosmic Cheerleaders only received a modest release to video and no good reviews.

Of course, the difference that Flesh Gordon Meets the Cosmic Cheerleaders immediately faces seventeen years after the original is that the field it enters into a very different one to the one that Flesh Gordon came out amidst. When the original was made, the genre parody was new – ahead of it would be The Phantom of the Paradise (1974), The Rocky Horror Picture Show (1975) and then a few years later the industry of movie in-jokes perpetuated by people like Joe Dante and the genre of faux bad movies and titles made by Empire and Full Moon and directors like Fred Olen Ray and David DeCoteau. Now Flesh Gordon Meets the Cosmic Cheerleaders is essentially having to compete with other tongue-in-cheek bad movie titles around at the time such as The Revenge of the Teenage Vixens from Outer Space (1986), Sorority Babes at the Slimeball Bowl-a-Rama (1987), Earth Girls Are Easy (1989), Bad Girls from Mars (1990), Beach Babes from Beyond (1994) and Attack of the 60 Foot Centerfolds (1995).

The sequel was also notedly made after the success of Star Wars (1977) went interstellar and the space opera that Flash Gordon represented was not a forgotten serial but revived for new life, including a big budget remake Flash Gordon (1980). Most importantly, in sitting down to Cosmic Cheerleaders, you feel that the idea behind Flesh Gordon – of bringing out the inherent sexuality of the old Flash Gordon serials – was an amusing one the first time around that becomes belaboured in the retelling.

As Flesh Gordon Meets the Cosmic Cheerleaders kicks in, you immediately switch off at the constant in-your-face crudeness of the farce – a breast-shaped rocketship, breast-shaped doorbells, Dr Jerkoff engaged in experiments to create big breasts, the steering device for the tit ship being joystick nipples on stalks that they have to drive by suckling on them and so on, and the tit ship using a giant bra as a parachute to make a landing. The film gets another spoof of King Kong (1933) off with the ape this time being seen urinating off the top of the Empire State Building. Some of the plot elements have been taken from the other Flash Gordon serials – the frozen Strange Planet resembles Frigia in Flash Gordon Conquers the Universe (1940), while the Turd People are based on the Clay People in Flash Gordon’s Trip to Mars (1938) and Emperor Whang’s consort Queen Frigia is loosely based on Azura the witch queen from that film.

On the other hand, Flesh Gordon Meets the Cosmic Cheerleaders comes with such a persistent level of nonsensical absurdity that some of the set-pieces prove undeniably amusing. There is the need to have to navigate an assteroid belt – yes, rocks shaped like butts that emit a noxious gas – where the only means to survive is to employ a weapon that fires giant corks up each ass. Flesh and Dr Jerkoff take off in a rocketship that is powered by chickens having sex – when the impotence ray affects the chicken, the only solution is for Vince Murdocco’s Flesh to have to have sex with the chickens whereupon we see him exiting from behind the curtain and shrugging “wasn’t too bad” while Dr Jerkoff lights a cigarette for the chicken.

Elsewhere, Robyn Kelly’s Dale is tortured by being placed in front of the Octopussylicker – an eight-limbed creature that gleefully eats her out. Flesh and Dr Jerkoff travel through the Mammary Mountains where they are menaced by a giant-sized penis monster but manage to escape into a vagina-shaped cave only for the monster to pursue by ‘entering’ the cave and washing them away in a tide of ejaculate. They travel through the womb to an area where men have reverted to infancy and sit in a bar in diapers where they are served milk by large-breasted women. There is also the encounter with the Turd People – giant turd-like beings – and the completely whacko image of Flesh and co departing in a turd-shaped rocketship. For all the crassness, there is a goofy innocence to the film. It might well be a supposedly pornographic follow-up but the level of nudity in the uncut version never goes beyond a handful of bare breasts.

The seventeen years difference has allowed the film to obtain a far more professional-looking level of special effects – the opening credits sequence is framed against an amusing array of gonzo spaceship designs. The first film was not exactly known for its acting, except perhaps William Hunt’s outrageously over-the-top camping. Canadian martial arts champion Vince Murdocco inherits the role of Flesh Gordon this time. It is hard to know if his performance was intended as parody (if it is, it comes on a level of sophistication that is not matched by the rest of the film) where Murdocco plays with exactly the same untrained vacancy and slow-wittedness of the guys cast in porn films.