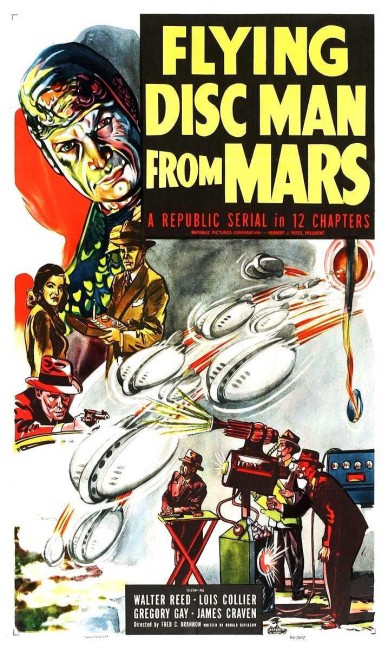 Kent Fowler runs an aerial security company, patrolling industrial plants from the air in a plane. He is witness as a rocket comes down. This contains Mota, an alien from Mars, who is taken in and granted refuge by one of Kent’s clients, the industrialist Dr Bryant. Bryant is sympathetic to Mota’s goals to subjugate the Earth on behalf of the Martian dictatorship. Mota constructs a semi-disc ship and sets up a base of operations inside an active volcano. As Mota, aided by Bryant, sets about getting the supplies he needs for his plans, Kent proves a constant thorn in his side.

Serials were adventures intended for juvenile audiences. They would be shown in theatres in either twelve or fifteen weekly chapters of about 15-20 minutes each. Each chapter ended with the heroine tied to a railway line before an oncoming train, the hero hanging onto the edge of a cliff by his fingertips (which gave rise to the term ‘cliffhanger’) or some such. The audience would have to wait to the following week where the means whereby they escaped from this peril would be revealed at the start of the ensuing chapter. Though the principal focus was adventure, serials varied through a number of genres, including the Western, the G-Man film, the first ever screen superhero outings and, of course, the space opera, which included classics like Flash Gordon (1936) and sequels and Buck Rogers (1939). The serial was at its height during the 1930s and 40s, eventually dying away in the mid-1950s with the arrival of television. (For a greater overview of the genre see Serials).

The twelve-chapter Flying Disc Man from Mars was made towards the end of the era of the serial – the last serial Blazing the Overland Trail (1956) as released only a few years later. It was made by Republic Pictures whose name was synonymous with cheaply produced films during this period. As a result, it comes with many corners cut – Chapter 10, for instance, almost entirely consists of recycled scenes from previous chapters.

Flying Disc Man from Mars was one of the very first alien invader films. The genre would kick off the following year with The Thing from Another World (1951) and then in a big way with The War of the Worlds (1953). (For a greater overview of the genre see Alien Invasion Films). Due to the fact that it is not informed by the tropes that would come after it, Flying Disc Man from Mars does not work particularly well as an alien invader film. There is only a single invader who frequently abandons his alien jumpsuit for a regular double-breasted suit and hat. Most of the running around is actually done by the industrialist villain’s henchmen and involves a series of industrial theft schemes, while the action consists of mundane stuff like car chases, fistfights and assorted aerial stunts.

The film plays out as almost an x-ray of the hot button topics of the age. The first flying saucer sighting was made by Kenneth Arnold in 1947 and there was much buzz about this in the public eye. Thus the alien invader spends much of his time flying around in what is called a semi-disc, although in actuality is a stubby plane that looks nothing like a disc or saucer.

Flying Disc Man from Mars was made only five years after the end of World War II. Thus the alien invader is seen in those terms – he wants to establish a dictatorship on Earth, he speaks with a German accent, while the industrialist he teams up with has an admiration of Hitler. This was also the era of atomic bomb fears. The first atomic bomb had only been dropped five years earlier in 1945 but A-bomb fears hadn’t quite lit up SF movies yet the way they would a few years later. The alien invader plans to unleash superior Martian atomic weaponry. Somewhat anticlimactically, we see the Earth criminals dropping atomic bombs but these rather feebly only look like regular explosions and do no more than blow up buildings, power lines, at most a dam.

Almost every episode contains some great fistfight scenes where you usually have multiple parties belting the heck out of each other and frequently demolishing the rest of the room with enormous ferocity and conviction. There are some reasonable cliffhangers with Walter Reed trapped in a falling plane, thrown out of a plane without a parachute and in one scenes punched backwards and falling into an open furnace. In several of these instances, the opening of the subsequent chapter delivers a big cheat – in the case of the furnace cliffhanger, we find Reed didn’t fall in at all but only fell in front of it and simply got up and walked away, or where his fall out of a plane without a parachute was broken by a landing in a haystack.

You wish the film had some of the great pulp super-science that the Flash Gordon or Rocket Man serials had. We do get the semi-disc – the squat stubby airplane, although this is in fact a prop recycled from an earlier Republic serial King of the Mounties (1942), while even Mota’s costume has been recycled from The Purple Monster Strikes (1945), an even earlier alien invader serial. There’s the appealing novelty of Mota locating his secret base inside an active volcano, which consists of a small cave area where the plane lands beyond which active flames are burning (something that surely must make for nightmarishly hot working conditions). However, beyond the mention of an atomic gun, which we never see, it is as though the film suffered a poverty of not only budget but imagination as well.

There’s also a certain amount of writing that produces outright laughter or the very least raised eyebrows today. Like the scenes with people transporting uranium in cardboard boxes. There is also the central premise that involves Walter Reed employed as a security guard who patrols in an airplane in the skies over industrial plants. This surely seems to be a fictional occupation that the writers have pulled out of thin air rather than exists in the real world – it would be a hideously expensive way to maintain security, There’s also the vagueness of Kent’s job description – he’s a private security contractor yet also seems able to do things that only a law enforcement official can do like obtain a search warrant. The story also hangs on improbabilities like most of the incidents being centred around Bryant’s plant while it takes most of the show before Kent concludes that Bryant is acting suspiciously.